Five major substances account for about 98% of air pollution: carbon monoxide (CO, about 52%), sulfur oxides (about 14%), hydrocarbons (about 14%), nitrogen oxides (about14%), and particulate matter (about 4%). The sources of these chemicals include transportation, industry, generation of electric power, space heating, and refuse disposal. Sulfur dioxide and smoke resulting from incomplete combustion of coal have been associated with acute adverse effects, particu-larly among the elderly and individuals with preexisting car-diac or respiratory disease. Ambient air pollution has been implicated as a contributing factor in bronchitis, obstructive ventilatory disease, pulmonary emphysema, bronchial asthma, and lung cancer. EPA standards for these substances apply to the general environment, and OSHA standards apply to workplace exposure.

Carbon monoxide (CO) is a colorless, tasteless, odorless, and nonirritating gas, a byproduct of incomplete combustion. The average concentration of CO in the atmosphere is about 0.1 ppm; in heavy traffic, the concentration may exceed 100 ppm. The recommended 2008 threshold limit values (TLV-TWA and TLV-STEL) are shown in Table 56–1. 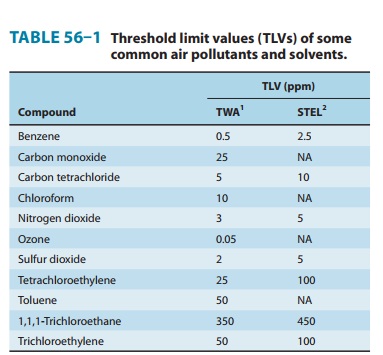 CO combines reversibly with the oxygen-binding sites of hemo-globin and has an affinity for hemoglobin that is about 220 times that of oxygen. The product formed—carboxyhemoglobin— cannot transport oxygen. Furthermore, the presence of carboxyhe-moglobin interferes with the dissociation of oxygen from the remaining oxyhemoglobin, thus reducing the transfer of oxygen to tissues. The brain and the heart are the organs most affected. Normal nonsmoking adults have carboxyhemoglobin levels of less than 1% saturation (1% of total hemoglobin is in the form of carboxyhemoglobin); this level has been attributed to the endog-enous formation of CO from heme catabolism. Smokers may exhibit 5–10% saturation, depending on their smoking habits. A person breathing air containing 0.1% CO (1000 ppm) would have a carboxyhemoglobin level of about 50%.

The principal signs of CO intoxication are those of hypoxia and progress in the following sequence: (1) psychomotor impairment;headache and tightness in the temporal area; (3) confusion and loss of visual acuity; (4) tachycardia, tachypnea, syncope, and coma; and (5) deep coma, convulsions, shock, and respiratory failure. There is great variability in individual responses to a given carboxy-hemoglobin concentration. Carboxyhemoglobin levels below 15% may produce headache and malaise; at 25% many workers com-plain of headache, fatigue, decreased attention span, and loss of fine motor coordination. Collapse and syncope may appear at around 40%; with levels above 60%, death may ensue as a result of irrevers-ible damage to the brain and myocardium. The clinical effects may be aggravated by heavy labor, high altitudes, and high ambient temperatures. Although CO intoxication is usually thought of as a form of acute toxicity, there is some evidence that chronic exposure to low levels may lead to undesirable effects, including the develop-ment of atherosclerotic coronary disease in cigarette smokers. The fetus may be quite susceptible to the effects of CO exposure.

In cases of acute intoxication, removal of the individual from the exposure source and maintenance of respiration are essential, fol-lowed by administration of oxygen—the specific antagonist to CO—within the limits of oxygen toxicity. With room air at 1 atm, the elimination half-time of CO is about 320 minutes; with 100% oxygen, the half-time is about 80 minutes; and with hyperbaric oxygen (2–3 atm), the half-time can be reduced to about 20 min-utes. If a hyperbaric oxygen chamber is readily available, it should be used in the treatment of CO poisoning for severely poisoned patients; however, there remain questions about its effectiveness. Progressive recovery from effectively treated CO poisoning, even of a severe degree, is often complete, although some patients dem-onstrate persistent impairment for a prolonged period of time.

Sulfur dioxide (SO2) is a colorless, irritant gas generated primarily by the combustion of sulfur-containing fossil fuels. The 2008 TLVs are given in Table 56–1.

On contact with moist membranes, SO2 forms sulfurous acid, which is responsible for its severe irritant effects on the eyes, mucous mem-branes, and skin. Approximately 90% of inhaled SO2 is absorbed in the upper respiratory tract, the site of its principal effect. The inhala-tion of SO2 causes bronchial constriction; parasympathetic reflexes and altered smooth muscle tone appear to be involved. Exposure to 5 ppm SO2 for 10 minutes leads to increased resistance to airflow in most humans.

Exposures of 5–10 ppm are reported to cause severe bronchospasm; 10–20% of the healthy young adult population is estimated to be reactive to even lower concentrations. The phenom-enon of adaptation to irritating concentrations has been reported in workers. However, current studies have not confirmed this phenom-enon. Asthmatic individuals are especially sensitive to SO2.

B. Clinical Effects and Treatment

The signs and symptoms of intoxication include irritation of the eyes, nose, and throat and reflex bronchoconstriction. In asth-matic subjects, exposure to SO2 may result in an acute asthmatic episode. If severe exposure has occurred, delayed-onset pulmonary edema may be observed. Cumulative effects from chronic low-level exposure to SO2 are not striking, particularly in humans but these effects have been associated with aggravation of chronic cardiopulmonary disease. When combined exposure to high respi-rable particulate loads and SO2 occurs, the mixed irritant load may increase the toxic respiratory response. Treatment is not spe-cific for SO2 but depends on therapeutic maneuvers used in the treatment of irritation of the respiratory tract and asthma.

Nitrogen dioxide (NO2) is a brownish irritant gas sometimes asso-ciated with fires. It is formed also from fresh silage; exposure of farmers to NO2 in the confines of a silo can lead to silo-filler’s disease. The 2008 TLVs are shown in Table 56–1.

B. Clinical Effects and Treatment

The signs and symptoms of acute exposure to NO2 include irrita-tion of the eyes and nose, cough, mucoid or frothy sputum produc-tion, dyspnea, and chest pain. Pulmonary edema may appear within 1–2 hours. In some individuals, the clinical signs may sub-side in about 2 weeks; the patient may then pass into a second stage of abruptly increasing severity, including recurring pulmonary edema and fibrotic destruction of terminal bronchioles (bronchi-olitis obliterans). Chronic exposure of laboratory animals to 10–25 ppm NO2 has resulted in emphysematous changes; thus, chronic effects in humans are of concern. There is no specific treatment for acute intoxication by NO2; therapeutic measures for the manage-ment of deep lung irritation and noncardiogenic pulmonary edema are used. These measures include maintenance of gas exchange with adequate oxygenation and alveolar ventilation. Drug therapy may include bronchodilators, sedatives, and antibiotics.

Ozone (O3) is a bluish irritant gas that occurs normally in the earth’s atmosphere, where it is an important absorbent of ultravio-let light. In the workplace, it can occur around high-voltage elec-trical equipment and around ozone-producing devices used for air and water purification. It is also an important oxidant found in polluted urban air. There is a near-linear gradient between expo-sure (1-hour level, 20–100 ppb) and response. See Table 56–1 for 2008 TLVs.

A. Clinical Effects and Treatment

O3 is an irritant of mucous membranes. Mild exposure produces upper respiratory tract irritation. Severe exposure can cause deep lung irritation, with pulmonary edema when inhaled at sufficient concentrations. Ozone penetration in the lung depends on tidal volume; consequently, exercise can increase the amount of ozone reaching the distal lung. Some of the effects of O3 resemble those seen with radiation, suggesting that O3 toxicity may result from the formation of reactive free radicals. The gas causes shallow, rapid breathing and a decrease in pulmonary compliance. Enhanced sensitivity of the lung to bronchoconstrictors is also observed.

Exposure around 0.1 ppm O3 for 10–30 minutes causes irrita-tion and dryness of the throat; above 0.1 ppm, one finds changes in visual acuity, substernal pain, and dyspnea. Pulmonary function is impaired at concentrations exceeding 0.8 ppm. Airway hyper-responsiveness and airway inflammation have been observed in humans.

The response of the lung to O3 is a dynamic one. The mor-phologic and biochemical changes are the result of both direct injury and secondary responses to the initial damage. Long-term exposure in animals results in morphologic and functional pul-monary changes. Chronic bronchitis, bronchiolitis, fibrosis, and emphysematous changes have been reported in a variety of spe-cies, including humans, exposed to concentrations above 1 ppm. There is no specific treatment for acute O3 intoxication. Management depends on therapeutic measures used for deep lung irritation and noncardiogenic pulmonary edema (see Nitrogen Oxides, above).