These agents are usually classified into four groups: DDT (chlo-rophenothane) and its analogs, benzene hexachlorides, cyclo-dienes, and toxaphenes (Table 56–2). They are aryl, carbocyclic, or heterocyclic compounds containing chlorine substituents. The individual compounds differ widely in their biotransforma-tion and capacity for storage in tissues; toxicity and storage are not always correlated. They can be absorbed through the skin as well as by inhalation or oral ingestion. There are, however, important quantitative differences between the various deriva-tives; DDT in solution is poorly absorbed through the skin, whereas dieldrin absorption from the skin is very efficient. Organochlorine pesticides have largely been abandoned because they cause severe environmental damage. DDT continues to have very restricted use for domestic mosquito elimination in malaria-infested areas of Africa. This use is controversial, but it is very effective and is likely to remain in place for the foresee-able future. Organochlorine pesticide residues in humans, ani-mals, and the environment present long-term problems that are not yet fully understood.

The acute toxic properties of all the organochlorine pesticides in humans are qualitatively similar. These agents interfere with inactivation of the sodium channel in excitable membranes and cause rapid repetitive firing in most neurons.

Calcium ion trans-port is inhibited. These events affect repolarization and enhance the excitability of neurons. The major effect is central nervous system stimulation. With DDT, tremor may be the first manifes-tation, possibly continuing to convulsions, whereas with the other compounds convulsions often appear as the first sign of intoxication. There is no specific treatment for the acute intoxi-cated state, and management is symptomatic.

The potential carcinogenic properties of organochlorine pesti-cides have been extensively studied, and results indicate that chronic administration to laboratory animals over long periods results in enhanced oncogenesis. Endocrine pathway disruption is the postulated mechanism. Extrapolation of the animal observa-tions to humans is controversial. However, several large epidemio-logic studies found no significant association between the risk of breast cancer and serum levels of DDE, the major metabolite of DDT. Similarly, the results of a case-control study conducted to investigate the relation between DDE and DDT breast adipose tissue levels and breast cancer risk did not support a positive asso-ciation. In contrast, recent work supports an association between prepubertal exposure to DDT and brain cancer. In addition, recent studies suggest that the risk of testicular cancer is increased in persons with elevated DDE levels. The risk of non-Hodgkin’s lymphoma (NHL) also seems to be increased in persons with elevated oxychlordane residues. Therefore, increased cancer risk in people exposed to the halogenated hydrocarbon pesticides is of concern.

The organochlorine pesticides are considered persistent chemicals. Degradation is quite slow when compared with other pesticides, and bioaccumulation, particularly in aquatic ecosystems, is well documented. Their mobility in soil depends on the composition of the soil; the presence of organic matter favors the adsorption of these chemicals onto the soil particles, whereas adsorption is poor in sandy soils. Once adsorbed, they do not readily desorb. These compounds induce significant abnormalities in the endocrine bal-ance of sensitive animal and bird species, in addition to their adverse impact on humans. Their use is appropriately banned in most areas.

These agents, some of which are listed in Table 56–3, are used to combat a large variety of pests. They are useful pesticides when in direct contact with insects or when used as plant systemics, where the agent is translocated within the plant and exerts its effects on insects that feed on the plant. These agents are based on com-pounds such as soman, sarin, and tabun, which were developed for use as war gases. Some of the less toxic organophosphorus com-pounds are used in human and veterinary medicine as local or systemic antiparasitics. The compounds are absorbed by the skin as well as by the respiratory and gastroin-testinal tracts. Biotransformation is rapid, particularly when com-pared with the rates observed with the chlorinated hydrocarbon pesticides. Storm and collaborators reviewed current and suggested human inhalation occupational exposure limits for 30 organo-phosphate pesticides (see References). 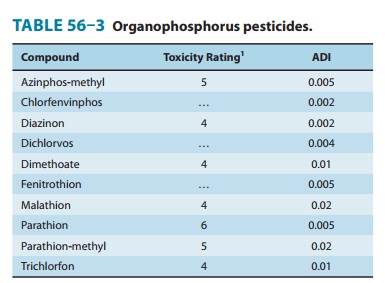 In mammals as well as insects, the major effect of these agents is inhibition of acetylcholinesterase through phosphorylation of the esteratic site. The signs and symptoms that characterize acute intoxication are due to inhibition of this enzyme and accumula-tion of acetylcholine; some of the agents also possess direct cholin-ergic activity. Altered neurologic and cognitive functions, as well as psychological symptoms of variable duration, have been associated with exposure to these pesticides. Furthermore, there is some indication of an association of low arylesterase activ-ity with neurologic symptom complexes in Gulf War veterans.

In addition to—and independently of—inhibition of acetyl-cholinesterase, some of these agents are capable of phosphorylat-ing another enzyme present in neural tissue, the so-called neuropathy target esterase. This results in progressive demyelina-tion of the longest nerves. Associated with paralysis and axonal degeneration, this lesion is sometimes called organophosphorus ester-induced delayed polyneuropathy (OPIDP). Delayed central and autonomic neuropathy may occur in some poisoned patients. Hens are particularly sensitive to these properties and have proved very useful for studying the pathogenesis of the lesion and for identifying potentially neurotoxic organophosphorus derivatives. In humans, neurotoxicity has been observed with triorthocresylphosphate (TOCP), a noninsecticidal organophosphorus com-pound. It is also thought to occur with the pesticides dichlorvos, trichlorfon, leptophos, methamidophos, mipafox, trichloronat, and others. The polyneuropathy usually begins with burning and tingling sensations, particularly in the feet, with motor weakness a few days later. Sensory and motor difficulties may extend to the legs and hands. Gait is affected, and ataxia may be present. Central nervous system and autonomic changes may develop even later. There is no specific treatment for this form of delayed neurotoxic-ity. The long-term prognosis of neuropathy target esterase inhibi-tion is highly variable. Reports of this type of neuropathy (and other toxicities) in pesticide manufacturing workers and in agri-cultural pesticide applicators have been published.

These compounds (Table 56–4) inhibit acetylcholinesterase by carbamoylation of the esteratic site. Thus, they possess the toxic properties associated with inhibition of this enzyme as described for the organophosphorus pesticides. The clinical effects due to car-bamates are of shorter duration than those observed with organo-phosphorus compounds. The range between the doses that cause minor intoxication and those that result in lethality is larger with carbamates than with the organophosphorus agents. Spontaneous reactivation of cholinesterase is more rapid after inhibition by the carbamates. Although the clinical approach to carbamate poison-ing is similar to that for organophosphates, the use of pralidoxime is not recommended. 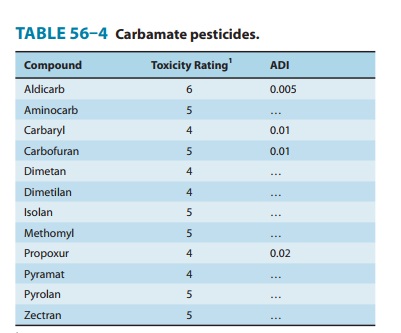 The carbamates are considered to be nonpersistent pesticides.They exert only a small impact on the environment.

Pesticides derived from natural sources include nicotine, rote-none, and pyrethrum. Nicotine is obtained from the dried leavesof Nicotiana tabacum and N rustica. It is rapidly absorbed from mucosal surfaces; the free alkaloid, but not the salt, is readily absorbed from the skin. Nicotine reacts with the acetylcholine receptor of the postsynaptic membrane (sympathetic and para-sympathetic ganglia, neuromuscular junction), resulting in depo-larization of the membrane. Toxic doses cause stimulation rapidly followed by blockade of transmission. Treatment is directed toward maintenance of vital signs and suppression of convulsions. 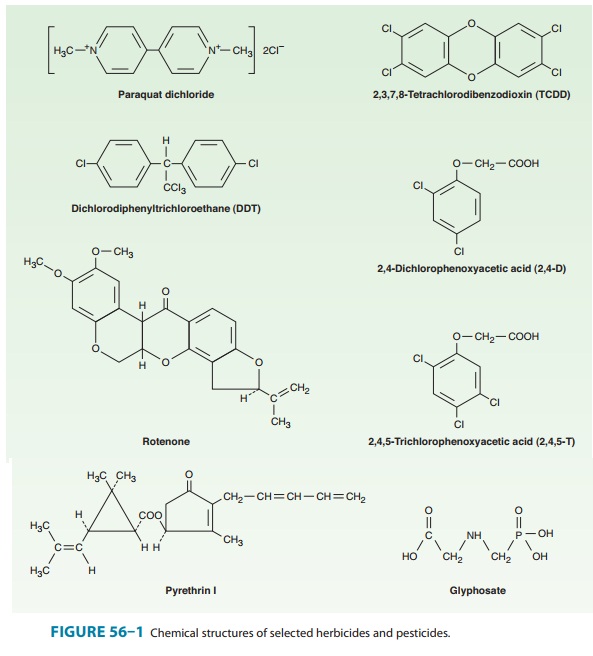 Pyrethrum consists of six known insecticidal esters: pyrethrin I (Figure 56–1), pyrethrin II, cinerin I, cinerin II, jasmolin I, and jasmolin II. Synthetic pyrethroids account for an increasing percent-age of worldwide pesticide usage. Pyrethrum may be absorbed after inhalation or ingestion; absorption from the skin is not significant. The esters are extensively biotransformed. Pyrethrum pesticides are not highly toxic to mammals. When absorbed in sufficient quanti-ties, the major site of toxic action is the central nervous system; excitation, convulsions, and tetanic paralysis can occur. Voltage-gated sodium, calcium, and chloride channels are considered tar-gets, as well as peripheral-type benzodiazepine receptors. Treatment of exposure is usually directed at management of symptoms. Anticonvulsants are not consistently effective. The chloride channel agonist, ivermectin, is of use, as are pentobarbital and mephenesin. The pyrethroids are highly irritating to the eyes, skin, and respira-tory tree. They may cause irritant asthma and, potentially, reactive airways dysfunction syndrome (RADS) and even anaphylaxis. The most common injuries reported in humans result from their aller-genic and irritant effects on the airways and skin. Cutaneous par-esthesias have been observed in workers spraying synthetic pyrethroids. The use of persistent synthetic pyrethroids for aircraft disinfection to comply with international rules regarding prevention of transfer of insect vectors has resulted in respiratory and skin problems, as well as some neurologic complaints in flight attendants and other aircraft workers. Severe occupational exposures to syn-thetic pyrethroids in China resulted in marked effects on the central nervous system, including convulsions.