Most drugs must bind to a receptor to bring about an effect.

Most drugs must bind to a receptor to bring about an effect. However, at the cellular level, drug binding is only the first in what is often a complex sequence of steps:

Note that the final change in function is accomplished by an effector mechanism. The effector may be part of the receptormolecule or may be a separate molecule. A very large number of receptors communicate with their effectors through coupling mol-ecules.

A. Types of Drug-Receptor Interactions

Agonist drugs bind to andactivatethe receptor in some fashion,which directly or indirectly brings about the effect (Figure 1–3A). Receptor activation involves a change in conformation in the cases that have been studied at the molecular structure level. Some receptors incorporate effector machinery in the same mol-ecule, so that drug binding brings about the effect directly, eg, opening of an ion channel or activation of enzyme activity. Other receptors are linked through one or more intervening coupling molecules to a separate effector molecule. The five major types of drug-receptor-effector coupling systems are discussed later. Pharmacologic antagonist drugs, by bind-ing to a receptor, compete with and prevent binding by other molecules. For example, acetylcholine receptor blockers such as atropine are antagonists because they prevent access of acetylcho-line and similar agonist drugs to the acetylcholine receptor site and they stabilize the receptor in its inactive state (or some state other than the acetylcholine-activated state). These agents reduce the effects of acetylcholine and similar molecules in the body (Figure 1–3B), but their action can be overcome by increasing the dosage of agonist. Some antagonists bind very tightly to the recep-tor site in an irreversible or pseudoirreversible fashion and cannot be displaced by increasing the agonist concentration. Drugs that bind to the same receptor molecule but do not prevent binding of the agonist are said to act allosterically and may enhance (Figure 1–3C) or inhibit (Figure 1–3D) the action of the agonist mole-cule. Allosteric inhibition is not overcome by increasing the dose of agonist. 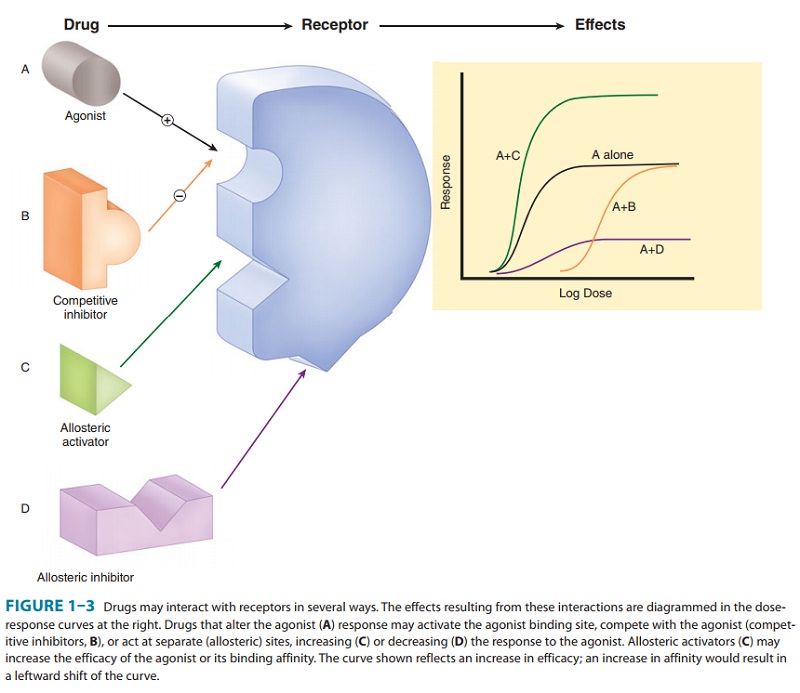 B. Agonists That Inhibit Their Binding Molecules

Some drugs mimic agonist drugs by inhibiting the molecules responsible for terminating the action of an endogenous agonist. For example, acetylcholinesterase inhibitors, by slowing the destruction of endogenous acetylcholine, cause cholinomimetic effects that closely resemble the actions of cholinoceptor agonist molecules even though cholinesterase inhibitors do not bind or only incidentally bind to cholinoceptors . Because they amplify the effects of physiologically released agonist ligands, their effects are sometimes more selective and less toxic than those of exogenous agonists.

Figure 1–4 describes a useful model of drug-receptor interaction. As indicated, the receptor is postulated to exist in the inactive, nonfunctional form (R i ) and in the activated form (R a). 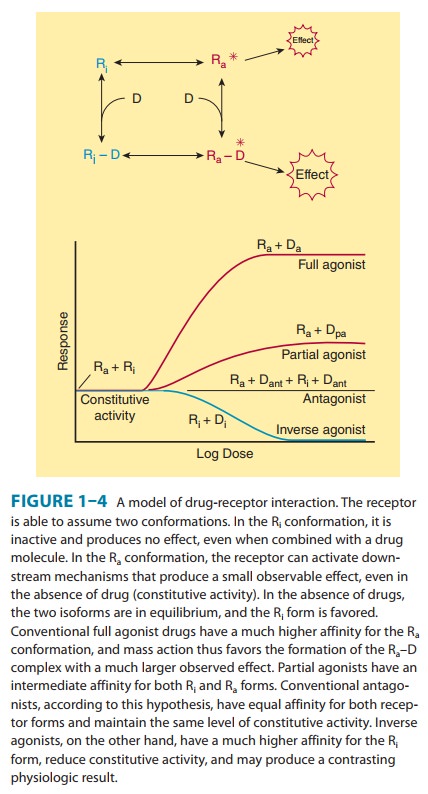 Thermodynamic considerations indicate that even in the absence of any agonist, some of the receptor pool must exist in the Ra form some of the time and may produce the same physiologic effect as agonist-induced activity. This effect, occurring in the absence of agonist, is termed constitutive activity. Agonists are those drugs that have a much higher affinity for the Ra configuration and stabilize it, so that a large percentage of the total pool resides in the Ra–D fraction and a large effect is produced. The recognition of constitutive activity may depend on the receptor density, the concentration of coupling molecules (if a coupled system), and the number of effectors in the system.

Many agonist drugs, when administered at concentrations suf-ficient to saturate the receptor pool, can activate their receptor-ef-fector systems to the maximum extent of which the system is capable; that is, they cause a shift of almost all of the receptor pool to the Ra–D pool. Such drugs are termed full agonists. Other drugs, called partial agonists, bind to the same receptors and activate themin the same way but do not evoke as great a response, no matter how high the concentration. In the model in Figure 1–4, partial agonists do not stabilize the Ra configuration as fully as full ago-nists, so that a significant fraction of receptors exists in the Ri–D pool. Such drugs are said to have low intrinsic efficacy. Thus, pindolol, a β-adrenoceptor partial agonist, may act either as an agonist (if no full agonist is present) or as an antagonist (if a full agonist such as epinephrine is present). Intrinsic efficacy is independent of affinity (as usually measured) for the receptor.In the same model, conventional antagonist action can be explained as fixing the fractions of drug-bound Ri and Ra in the same relative amounts as in the absence of any drug. In this situa-tion, no change will be observed, so the drug will appear to be without effect. However, the presence of the antagonist at the receptor site will block access of agonists to the receptor and pre-vent the usual agonist effect. Such blocking action can be termed neutral antagonism.

What will happen if a drug has a much stronger affinity for the Ri than for the Ra state and stabilizes a large fraction in the Ri–D pool? In this scenario the drug would reduce any constitutive activity, thus resulting in effects that are the opposite of the effects produced by conventional agonists at that receptor. Such drugs have been termed inverse agonists (Figure 1–4). One of the best documented examples of such a system is the γ-aminobutyric acid (GABAA) receptor-effector (a chloride channel) in the nervous system. This receptor is activated by the endogenous transmitter GABA and causes inhibition of postsynaptic cells. Conventional exogenous agonists such as benzodiazepines also facilitate the receptor-effector system and cause GABA-like inhibition with sedation as the therapeutic result. This inhibition can be blocked by conventional neutral antagonists such as flumazenil. In addi-tion, inverse agonists have been found that cause anxiety and agitation, the inverse of sedation . Similar inverse agonists have been found for β-adrenoceptors, histamine H1 and H2 receptors, and several other receptor systems.

Termination of drug action is a result of one of several processes. In some cases, the effect lasts only as long as the drug occupies the receptor, and dissociation of drug from the receptor automatically terminates the effect. In many cases, however, the action may persist after the drug has dissociated because, for example, some coupling molecule is still present in activated form. In the case of drugs that bind covalently to the receptor site, the effect may per-sist until the drug-receptor complex is destroyed and new recep-tors or enzymes are synthesized, as described previously for aspirin. In addition, many receptor-effector systems incorporate desensiti-zation mechanisms for preventing excessive activation when ago-nist molecules continue to be present for long periods.

To function as a receptor, an endogenous molecule must first be selective in choosing ligands (drug molecules) to bind; and second,it must change its function upon binding in such a way that the function of the biologic system (cell, tissue, etc) is altered. The selectivity characteristic is required to avoid constant activation of the receptor by promiscuous binding of many different ligands. The ability to change function is clearly necessary if the ligand is to cause a pharmacologic effect. The body contains a vast array of molecules that are capable of binding drugs, however, and not all of these endogenous molecules are regulatory molecules. Binding of a drug to a nonregulatory molecule such as plasma albumin will result in no detectable change in the function of the biologic system, so this endogenous molecule can be called an inert binding site. Such binding is not completely without significance, however, because it affects the distribution of drug within the body and determines the amount of free drug in the circulation. Both of these factors are of pharmacokinetic importance.