This category encompasses a wide variety of corneal disorders, some of which, such as keratoconjunctivitis sicca, occur very frequently. Causesinclude:

This category encompasses a wide variety of corneal disorders, some of which, such as keratoconjunctivitis sicca, occur very frequently. Causesinclude:

Superficial punctate keratoconjunctivitis is avery frequent finding as it can be caused by a wide variety of exogenous factorssuch as foreign bodies beneath the upper eyelid, contact lenses, smog, etc. It may also appear as a secondary symptom of many other forms of keratitis (see the forms of keratitis discussed in the following section). It can also occur in association with an endogenous disorder such as Thygeson’s disease.

Depending on the cause and severity of the superficial corneallesions, symptoms range from a nearly asymptomatic clinical course (such as in neuroparalytic keratitis in which the cornea loses its sensitivity) to an intense foreign body sensation in which the patient has a sensation of sand in the eye with typical signs of epiphora, severe pain, burning, and blepharo-spasm. Visual acuity is usually only minimally compromised.

Fluorescein dye isapplied and the eye is examined under a slit lamp. This visualizes fine epithelial defects. The specific dye patterns that emerge give the ophthalmol-ogist information about the etiology of the punctate keratitis (Figs. 5.11a – i). 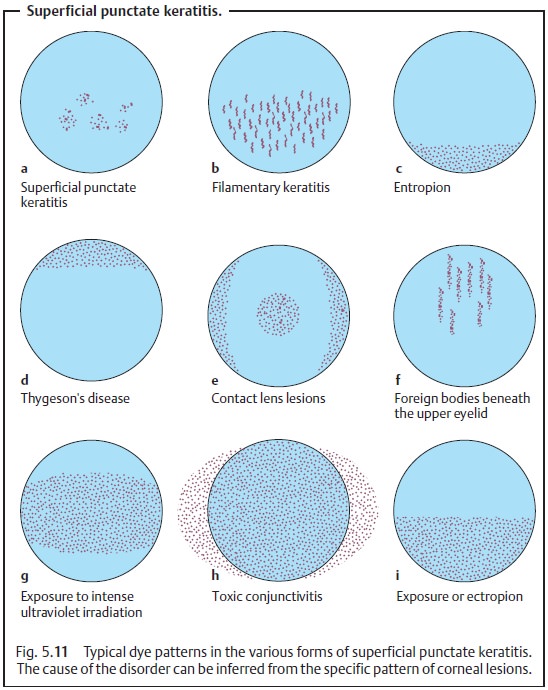 Depending on the cause, the superficial cornealchanges will respond rapidly or less so to treatment with artificial tears, whereby every effort should be made to eliminate the causative agents (Fig. 5.11). Depending on the severity of findings, artificial tears of varying viscos-ity (ranging from eyedrops to high-viscosity gels) are prescribed and applied with varying frequency. In exposure keratitis, a high-viscosity gel or ointment is used because of its long retention time; superficial punctate keratitis is treated with eyedrops.

Exposure keratitis is a relatively frequent clinical syndrome.For example, it may occur in association with facial paralysis following a stroke.

Due tofacial nerve palsy, there is insufficient closure of the eyelidsover the eyeball (lagophthalmos), and the inferior third to half of the cornea remains exposed and unprotected (exposure keratitis). Superficial punctate keratitis (see above) initially develops in this region and can progress to cor-neal erosion (see Fig. 18.5) or ulcer.

Other causes for exposure keratitis without facial nerve palsy include:

Similar to superficial punctate keratitis (although usually moresevere) but unilateral.

Application of fluorescein dye will reveal a typi-cal pattern of epithelial lesions (Fig. 5.11i).

Application of artificial tears is usually not sufficient where eye-lid motor function is impaired. In such cases, high-viscosity gels, ointmentpackings (for antibiotic protection), and a watch glass bandage are required.The watch glass bandage must be applied so as to create a moist airtight chamber that prevents further desiccation of the eye (see Fig. 2.9). In the pres-ence of persistent facial nerve palsy that shows no signs of remission, lateraltarsorrhaphy is the treatment of choice. The same applies to treatment ofexposure keratitis due to insufficient eyelid closure from other causes (see Etiology).

This is one of the most frequent causes of superficial keratitis. The syndrome itself is attributable to dry eyes due to lack of tear fluid.

Keratitis associated with palsy of the ophthalmic division of the trigeminal nerve.

Palsy of the ophthalmic division of the trigeminal nerve is lessfrequent that facial nerve palsy.

The trigeminal nerve is responsible for the cornea’s sensitivity toexogenous influences. A conduction disturbance in the trigeminal nerve is usually a sequela of damage to the trigeminal ganglion from trauma, radiation therapy of an acoustic neurinoma, or surgery. It will lead to loss of corneal sen-sitivity. As a result of this loss of sensitivity, the patient will not feel any sensa-tion of drying in the eye, and the blinking frequency drops below the level required to ensure that the cornea remains moist. As in exposure keratitis, superficial punctate lesions will form initially, followed by larger epithelial defects that can progress to a corneal ulcer if bacterial superinfection occurs.

Because patients with loss of trigeminal function are free of pain,they will experience only slight symptoms such as a foreign body sensation or an eyelid swelling.

Corneal damage, usually central or slightlybelow the center of the cornea, may range from superficial punctate keratitis (visible after application of fluorescein dye) to a deep corneal ulcer with per-foration. The eye will be red and in extreme cases may be leaking aqueous humor.

This is essentiallyidentical to treatment of exposure keratitis. Itincludes moistening the cornea, antibiotic protection as prophylaxis against infection, and, if conservative methods are unsuccessful, tarsorrhaphy.

These changes are generally the result of a corneal trauma.

These problems occur either withpoorly seated rigid contact lensesthat rub on the surface of the cornea or from overwearing soft contact lenses.

If contact lenses are worn for extended periods of time despite symptoms, severe inflammation, corneal ulceration, and vascularization of the corneal periphery may result.

The ophthalmologist will detect typical cornealchanges after applying fluorescein dye (Fig. 5.11e). Keratoconjunctivitis on the superior limbus with formation of giant papillae, wart-like protrusions of connective tissue frequently observed on the superior tarsus (Fig. 5.12), are signs of contact lens or preservative incompatibility. 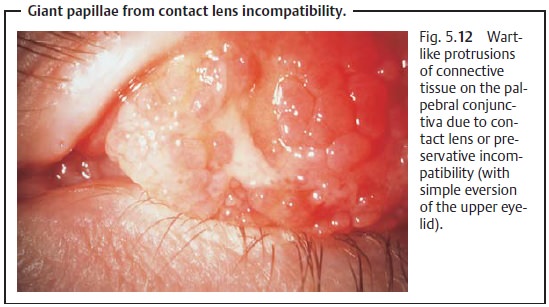 The patient should temporarily discontinue wearing the contactlenses, and inflammatory changes should be controlled with steroids until the irritation of the eye has abated.

Protracted therapy with topical steroids should be monitored regularly by an ophthalmologist as superficial epithelial defects heal poorly under steroid therapy. Protracted high-dosage steroid therapy causes a secondary increase in intraocular pressure and cataract in one-third of all patients.

The specific ophthalmologic findings will determine whether the patient should be advised to permanently discontinue wearing contact lenses or whether changing contact lenses and cleaning agents will be sufficient.

Bullous keratopathy is among the most frequent indicationsfor corneal transplants. 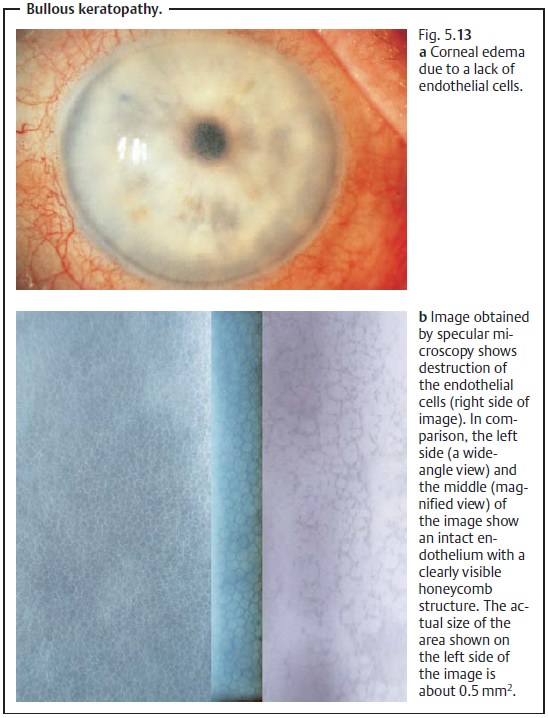 The gradual loss of endothelial cells causesslow deterioration ofvision. The patient typically will have poorer vision in the morning than in theevening, as corneal swelling is greater during the night with the eyelids closed.

However, in these cases the intraocular pressure is typically increased.

Where the damage to the endothelial cells is not too far advancedand only occasional periods of opacification occur (such as in the morning), hyperosmolar solutions such as 5% Adsorbonac can improve the patient’s eye-sight by removing water. However, this is generally only a temporary solu-tion. Beyond a certain stage a corneal transplant (penetrating keratoplasty;) is indicated.