This average distance travelled by the molecule between collisions is called mean free path (λ). We can calculate the mean free path based on kinetic theory.

Usually the average speed of gas molecules is several hundred meters per second even at room temperature. Odor from an open perfume bottle takes some time to reach us even if we are closer to the room. The time delay is because the odor of the molecules cannot travel straight to us as it undergoes a lot of collisions with the nearby air molecules and moves in a zigzag path. This average distance travelled by the molecule between collisions is called mean free path (λ). We can calculate the mean free path based on kinetic theory.

We know from postulates of kinetic theory that the molecules of a gas are in random motion and they collide with each other. Between two successive collisions, a molecule moves along a straight path with uniform velocity. This path is called mean free path.

Assume that only one molecule is in motion and all others are at rest as shown in the Figure 9.8 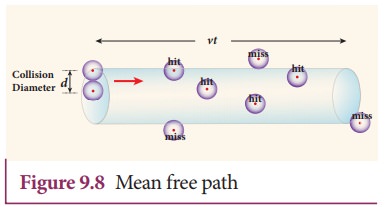 But mn=mass per unit volume = ρ (density of the gas) 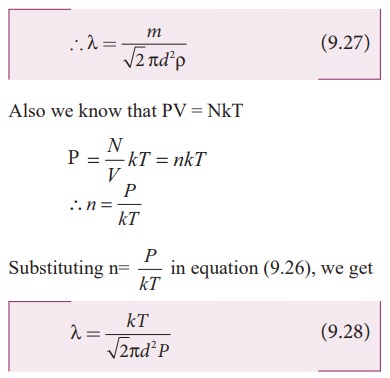 The equation (9.28) implies the following

1. Mean free path increases with increasing temperature. As the temperature increases, the average speed of each molecule will increase. It is the reason why the smell of hot sizzling food reaches several meter away than smell of cold food.

2. Mean free path increases with decreasing pressure of the gas and diameter of the gas molecules. 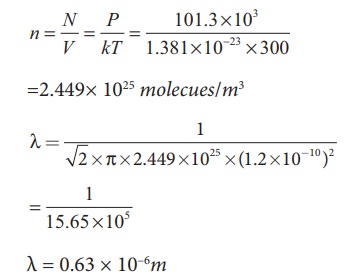