1. Write down the postulates of kinetic theory of gases.

● All the molecules of a gas are identical, elastic spheres.

● The molecules of different gases are different.

● The number of molecules in a gas is very large and the average separation between them is larger than size of the gas molecules.

● The molecules of a gas are in a state of continuous random motion.

● The molecules collide with one another and also with the walls of the container.

● These collisions are perfectly elastic so that there is no loss of kinetic energy during collisions.

● Between two successive collisions, a molecule moves with uniform velocity.

● The collisions are instantaneous. The time spent by a molecule in each collision is very small compared to the time elapsed between two consecutive collisions.

● These molecules obey Newton's laws of motion even though they move randomly.

2. Derive the expression of pressure exerted by the gas on the walls of the container.

● Consider a monatomic gas of N molecules each having a mass m inside a cubical container of side l. The molecules of the gas are in random motion. 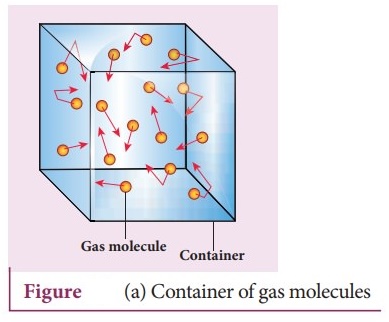 ● They collide with each other and also with the walls of the container. As the collisions are elastic in nature, there is no loss of energy, but a change in momentum occurs.

● The molecules of the gas exert pressure on the walls of the container due to collision on it.

● During each collision, the molecules impart certain momentum to the wall. Due to transfer of momentum, the walls experience a continuous force. 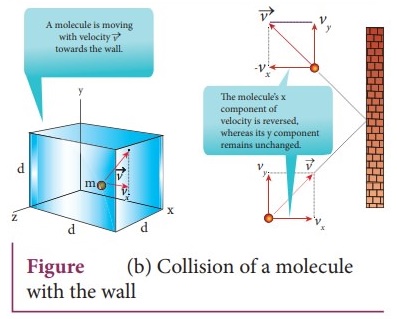 ● The force experienced per unit area of the walls of the container determines the pressure exerted by the gas.

● It is essential to determine the total momentum transferred by the molecules in a short interval of time.

● A molecule of mass m moving with a velocity v̄ having components (vx, vy, vz) hits the right side wall. 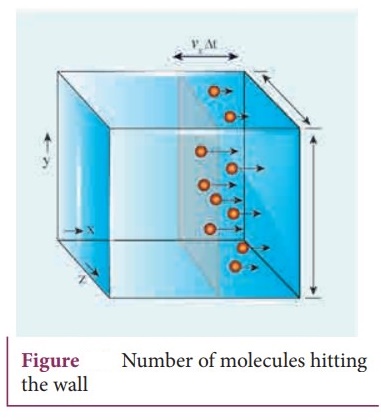 ● The collision is elastic, the particle rebounds with same speed and its x-component is reversed.

● This is shown in the Figure (b). The components of velocity of the molecule after collision are (−vx, vy, vz).

The x-component of momentum of the molecule before collision = mvx.

The x-component of momentum of the molecule after collision = −mvx

● The number of molecules hitting the right side wall in a small interval of time Δt is calculated as follows.

● The molecules within the distance of vxΔt from the right side wall and moving towards the right will hit the wall in the time interval Δt.

● The number of molecules that will hit the right side wall in a time interval Δt is equal to the product of volume (Avx Δt) and number density of the molecules (n).

● Here A is area of the wall and n is number of molecules per unit volume (N/V). The number density is the same throughout the cube.

● In the same interval of time ∆t, the total momentum transferred by the molecules.

● From Newton's second law, the change in momentum in a small interval of time gives rise to force. The force exerted by the molecules on the wall (in magnitude)

Pressure, P = force divided by the area of the wall

● Since all the molecules are moving completely in random manner, they do not have same speed. So we can replace the term vx2 by the average

● Since the gas is assumed to move in random direction, it has no preferred direction of motion (the effect of gravity on the molecules is neglected). The molecule has same average speed in all the three direction. So,

. The mean square speed is written as

3. Explain in detail the kinetic interpretation of temperature.

1) To understand the microscopic origin of temperature in the same way,

● Multiply the above equation by 3/2 on both sides,

● R.H.S of the equation (3) is called average kinetic energy of a single molecule

The average kinetic energy per molecule

● Equation (4) implies that the temperature of a gas is a measure of the average translational kinetic energy per molecule of the gas.

● Equation (4) implies that the temperature of a gas is a measure of the average translational kinetic energy per molecule of the gas.

● The average kinetic energy of each molecule depends only on temperature of the gas not on mass of the molecule.

● If the temperature of an ideal gas is measured using thermometer, the average kinetic energy of each molecule can be calculated without seeing the molecule through naked eye.

● By multiplying the total number of gas molecules with average kinetic energy of each molecule, the internal energy of the gas is obtained.

From equation (6). The internal energy of an ideal gas depends only on absolute temperature and is independent of pressure and volume.

Diatomic molecule : There are two cases.

● A molecule of a diatomic gas consists of two atoms bound to each other by a force of attraction.

● The molecule can be regarded as a system of two point masses fixed at the ends of a massless elastic spring.

● So, the motion of the center of mass requires three translational degrees of freedom (figure a). The diatomic molecule can rotate about three mutually perpendicular axes (figure b).

● But the moment of inertia about its own axis of rotation is negligible (about y axis in the figure).

● At a very high temperature such as 5000 K, the diatomic molecules possess additional two degrees of freedom due to vibrational motion [one due to kinetic energy of vibration and the other is due to potential energy] (Figure c). So totally there are seven degrees of freedom.

● There are two cases.

● Linear triatomic molecule In this type, two atoms lie on either side of the central atom.

● At normal temperature, linear triatomic molecule will have five degrees of freedom.

● The three atoms lie at the vertices of a triangle.

● Equipartition law of energy is used to calculate the value of CP − CV and the ratio between them γ = CP / CV. Here γ is called adiabatic exponent.

● For one mole, the molar specific heat at constant volume = CV 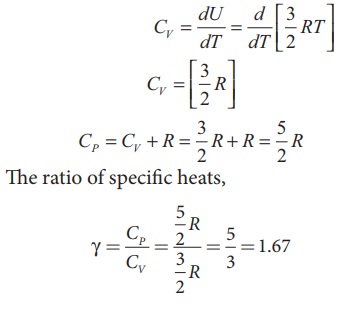 ● For one mole, Specific heat at constant  volume. 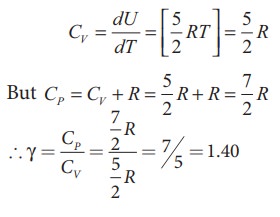 ● Energy of a diatomic molecule at high temperature is equal to 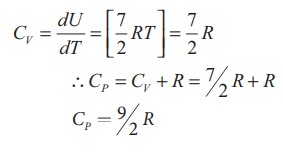 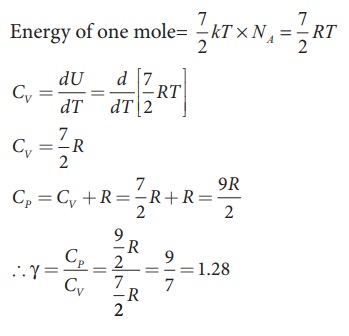 ● The air molecules are moving in random directions.

● The speed of each molecule is not the same even though macroscopic parameters like temperature and pressure are fixed.

● Each molecule collides with every other molecule and they exchange their speed.

● To find how many gas molecules have the range of speed from v to v + dv. This is given by Maxwell's speed distribution function.

The number of molecules having speeds ranging from υ to υ + dυ equals the area of the rectangle, Nv + dυ. 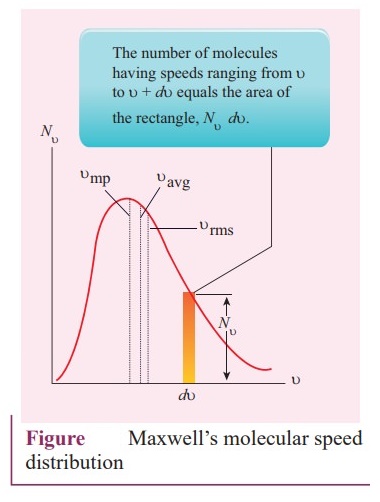 ● For a given temperature the number of molecules having lower speed increases parabolically but decreases exponentially after reaching most probable speed.

● The speed is greatest among the three.

● The area under the graph will give the total number of gas molecules in the system.

● As temperature increases, the peak of the curve is shifted to the right. It implies that the average speed of each molecule will increase. But the area under each graph is same since it represents the total number of gas molecules.

7. Derive the expression for mean free path of the gas. 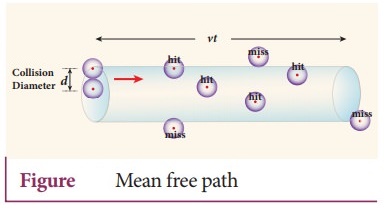 ● The molecules of a gas are in random motion and they collide with each other.

● Between two successive collisions, a molecule moves along a straight path with uniform velocity.

● This path is called mean free path. Consider a system of molecules each with diameter d. Let n be the number of molecules per unit volume.

● Assume that only one molecule is in motion and all others are at rest.

● If a molecule moves with average speed v in a time t, the distance travelled is vt. In this time t, consider the molecule to move in an imaginary cylinder of volume nd2vt.

● It collides with any molecule whose center is within this cylinder. Therefore, the number of collisions is equal to the number of molecules in the volume of the imaginary cylinder.

● It is equal to πd2vtn. The total path length divided by the number of collisions in time t is the mean free path.

● So the average relative speed of one molecule with respect to other molecules has to be taken into account.

● The equation (1) implies that the mean free path is inversely proportional to number density.

Case 1 : Rearranging the equation (2) using ‘m' (mass of the molecule)

But mn = mass per unit volume = ρ (density of the gas) 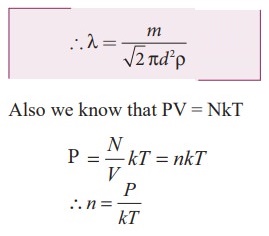 ● Brownian motion is due to the bombardment of suspended particles by molecules of the surrounding fluid.

● According to kinetic theory, any particle suspended in a liquid or gas is continuously bombarded from all the directions so that the mean free path is almost negligible.

● This leads to the motion of the particles in a random and zig-zag manner. 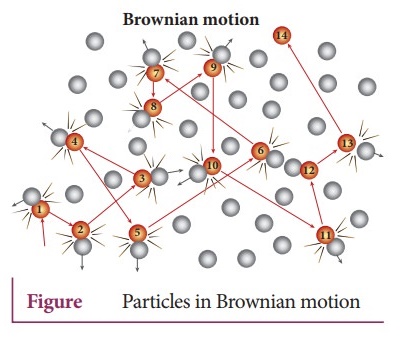 ● Brownian motion decreases with bigger particle size, high viscosity and density of the liquid (or) gas.