According to kinetic theory, any particle suspended in a liquid or gas is continuously bombarded from all the directions so that the mean free path is almost negligible.

In 1827, Robert Brown, a botanist reported that grains of pollen suspended in a liquid moves randomly from one place to other. The random (Zig - Zag path) motion of pollen suspended in a liquid is called Brownian motion. In fact we can observe the dust particle in water moving in random directions. This discovery puzzled scientists for long time. There were a lot of explanations for pollen or dust to move in random directions but none of these explanations were found adequate. After a systematic study, Wiener and Gouy proposed that Brownian motion is due to the bombardment of suspended particles by molecules of the surrounding fluid. But during 19th century people did not accept that every matter is made up of small atoms or molecules. In the year 1905, Einstein gave systematic theory of Brownian motion based on kinetic theory and he deduced the average size of molecules.

According to kinetic theory, any particle suspended in a liquid or gas is continuously bombarded from all the directions so that the mean free path is almost negligible. This leads to the motion of the particles in a random and zig–zag manner as shown in Figure 9.9. But when we put our hand in water it causes no random motion because the mass of our hand is so large that the momentum transferred by the molecular collision is not enough to move our hand. 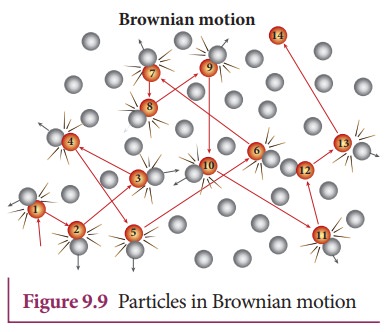 2. Brownian motion decreases with bigger particle size, high viscosity and density of the liquid (or) gas.