The interrupt mechanism allows devices to signal the CPU and to force execution of a particular piece of code.

■     computation, as in determining the next output to send to the device or processing the last input received, and

To allow parallelism, we need to introduce new mechanisms into the CPU.

The interrupt mechanism allows devices to signal the CPU and to force execution of a particular piece of code. When an interrupt occurs, the program counter’value is changed to point to an interrupt handler routine (also commonly known as a device driver ) that takes care of the device: writing the next data, reading data that have just become ready, and so on. The interrupt mechanism of course saves the value of the PC at the interruption so that the CPU can return to the program that was interrupted. Interrupts therefore allow the flow of control in the CPU to change easily between different contexts, such as a foreground computation and multiple I/O devices.

As shown in Figure, the interface between the CPU and I/O device includes the following signals for interrupting:

■       the I/O device asserts the interrupt request signal when it wants service from the CPU; and

■    the CPU asserts the interrupt acknowledge signal when it is ready to handle the I/O device’s request.

The I/O device’s logic decides when to interrupt; for example, it may generate an interrupt when its status register goes into the ready state. The CPU may not be able to immediately service an interrupt request because it may be doing something else that must be finished first—for example, a program that talks to both a high-speed disk drive and a low-speed keyboard should be designed to finish a disk transaction before handling a keyboard interrupt. Only when the CPU decides to acknowledge the interrupt does the CPU change the program counter to point to the device’s handler. The interrupt handler operates much like a subroutine, except that it is not called by the executing program. The program that runs when no interrupt is being handled is often called the foreground program; when the interrupt handler finishes, it returns to the foreground program, wherever processing was interrupted. 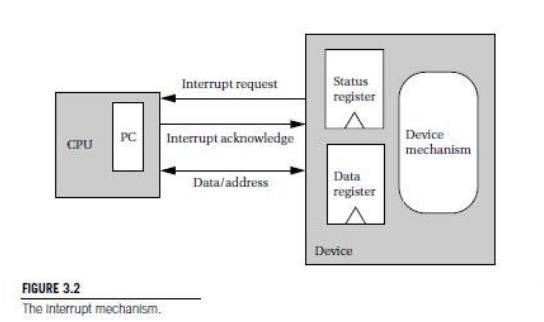 Before considering the details of how interrupts are implemented, let’s look at the interrupt style of processing and compare it to busy-wait I/O. Example 3.4 uses interrupts as a basic replacement for busy-wait I/O; Example 3.5 takes a more sophisticated approach that allows more processing to happen concurrently.

Copying characters from input to output with basic interrupts

As with Example 3.3, we repeatedly read a character from an input device and write it to an output device. We assume that we can write C functions that act as interrupt handlers. Those handlers will work with the devices in much the same way as in busy-wait I/O by reading and writing status and data registers. The main difference is in handling the output— the interrupt signals that the character is done, so the handler does not have to do anything.

poke(IN_STATUS,0); /* reset status to initiate next

The main program is reminiscent of the busy-wait program. It looks at gotchar to check when a new character has been read and then immediately sends it out to the output device.

Copying characters from input to output with interrupts and buffers

Because we do not need to wait for each character, we can make this I/O program more sophisticated than the one in Example 3.4. Rather than reading a single character and then writing it, the program performs reads and writes independently. The read and write routines communicate through the following global variables:

■        A character string io_buf will hold a queue of characters that have been read but not yet written.

■  An integer error will be set to 0 whenever io_buf overflows.

The global variables allow the input and output devices to run at different rates. The queue io_buf acts as a wraparound buffer—we add characters to the tail when an input is received and take characters from the tail when we are ready for output. The head and tail wrap around the end of the buffer array to make most efficient use of the array. Here is the situation at the start of the program’s execution, where the tail points to the first available character and the head points to the ready character. As seen below, because the head and tail are equal, we know that the queue is empty.

When the first character is read, the tail is incremented after the character is added to the queue, leaving the buffer and pointers looking like the following:

When the buffer is full, we leave one character in the buffer unused. As the next figure shows, if we added another character and updated the tail buffer (wrapping it around to the head of the buffer), we would be unable to distinguish a full buffer from an empty one.

Here is what happens when the output goes past the end of io_buf:

The following code provides the declarations for the above global variables and some service routines for adding and removing characters from the queue. Because interrupt handlers are regular code, we can use subroutines to structure code just as with any program.

Void add_char(char achar) { /* add  a Character to the buffer

char remove_char() { /* take a character from the buffer head*/

Assume that we have two interrupt handling routines defined in C, input_handler for the input device and output_handler for the output device. These routines work with the device in much the same way as did the busy-wait routines. The only complication is in starting the output device: If io_buf has characters waiting, the output driver can start a new output transaction by itself. But if there are no characters waiting, an outside agent must start a new output action whenever the new character arrives. Rather than force the foreground

program to look at the character buffer, we will have the input handler check to see whether there is only one character in the buffer and start a new transaction.

Here is the code for the input handler:

else { /* read the character and update pointer */

/* if buffer was empty, start a new output

Assume that the foreground code is performing a matrix multiplication operation y Ax b:

We use the interrupt handlers of Example 3.5 to perform I/O while the matrix compu- tation is performed, but with one small change: read_handler has a bug that causes it to change the value of j . While this may seem far-fetched, remember that when the interrupt handler is written in assembly language such bugs are easy to introduce. Any CPU register that is written by the interrupt handler must be saved before it is modified And restored before the handler exits. Any type of bug—such as forgetting to save the register or to properly restore it—can cause that register to mysteriously change value in the foreground program.

What happens to the foreground program when j changes value during an interrupt depends on when the interrupt handler executes. Because the value of j is reset at each iteration of the outer loop, the bug will affect only one entry of the result y . But clearly the entry that changes will depend on when the interrupt occurs. Furthermore, the change observed in y depends on not only what new value is assigned to j (which may depend on the data handled by the interrupt code), but also when in the inner loop the interrupt occurs. An inter- rupt at the beginning of the inner loop will give a different result than one that occurs near the end. The number of possible new values for the result vector is much too large to consider manually—the bug cannot be found by enumerating the possible wrong values and correlat- ing them with a given root cause. Even recognizing the error can be difficult—for example, an interrupt that occurs at the very end of the inner loop will not cause any change in the foreground program’s result. Finding such bugs generally requires a great deal of tedious .

Providing a practical interrupt system requires having more than a simple interrupt request line. Most systems have more than one I/O device, so there must be some mechanism for allowing multiple devices to interrupt. We also want to have flexibil- ity in the locations of the interrupt handling routines, the addresses for devices, and so on. There are two ways in which interrupts can be generalized to handle mul- tiple devices and to provide more flexible definitions for the associated hardware and software:

■            interrupt priorities allow the CPU to recognize some interrupts as more important than others, and

while it handles more important requests. As shown in Figure 3.3, the CPU pro-vides several different interrupt request signals, shown here as L1, L2, up to Ln. Typically, the lower-numbered interrupt lines are given higher priority, so in this case, if devices 1, 2, and n all requested interrupts simultaneously, 1’s request would be acknowledged because it is connected to the highest-priority interrupt line. Rather than provide a separate interrupt acknowledge line for each device, most CPUs use a set of signals that provide the priority number of the winning interrupt in binary form (so that interrupt level 7 requires 3 bits rather than 7). A device knows that its interrupt request was accepted by seeing its own priority number on the interrupt acknowledge lines.