After learning this chapter you will be able to:

Define and describe the elements of an embedded system

Understand how embedded system works with the help of two case studies:

As defined earlier, an embedded system is a combination of 3 things:

And it is supposed to do one specific task only.

Diagrammatically an embedded system can be represented as follows: 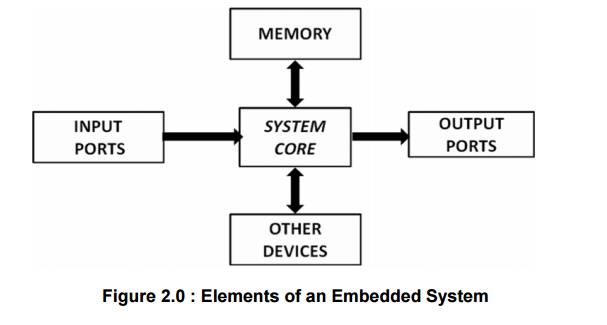 Embedded systems are basically designed to regulate a physical variable (such Microwave Oven) or to manipulate the state of some devices by sending some signals to the actuators or devices connected to the output port system (such as temperature in Air Conditioner), in response to the input signal provided by the end users or sensors which are connected to the input ports.

Hence the embedded systems can be viewed as a reactive system.

The memory of the system is responsible for holding the code (control algorithm and other important configuration details).

An embedded system without code (i.e. the control algorithm) implemented memory has all the peripherals but is not capable of making decisions depending on the situational as well as real world changes.

Memory for implementing the code may be present on the processor or may be implemented as a separate chip interfacing the processor In a controller based embedded system, the controller may contain internal memory for storing code

Here are some case studies on some commonly used embedded systems that will help to better understand the concept. 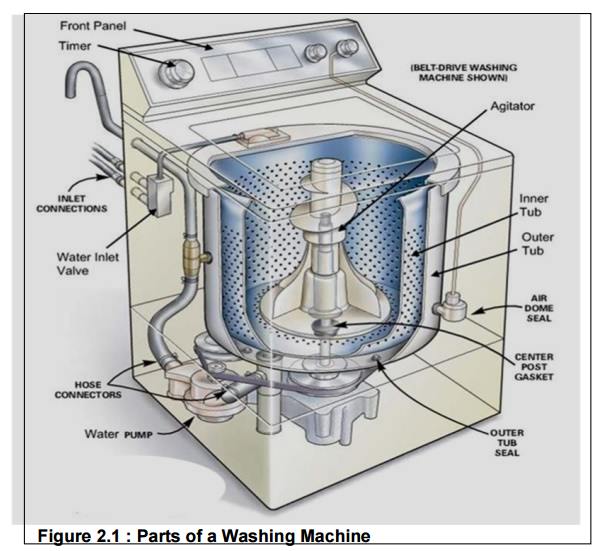 Tub: There are two types of tubs in the washing washing machine: inner and outer. The clothes are loaded in the inner tub, where the clothes are washed, rinsed and dried. The inner tub has small holes for draining the water. The external tub covers theinner tub and supports it during various cycles of clothes washing.

In some washing machines, instead of the long agitator, there is a disc that contains blades on its upper side. The rotation of the disc and the blades produce strong currents within the water and the rubbing of clothes that helps in removing the dirt from clothes.

Timer: The timer helps setting the wash time for the clothes manually. In the automatic mode the time is set automatically depending upon the number of clothes inside the washing machine.

Printed circuit board (PCB): The PCB comprises of the various electronic components and circuits, which are programmed to perform in unique ways depending on the load conditions (the condition and the amount of clothes loaded in the washing machine). They are sort of artificial intelligence devices that sense the various external conditions and take the decisions accordingly. These are also called as fuzzy logic systems. Thus the PCB will calculate the total weight of the clothes, and find out the quantity of water and detergent required, and the total time required for washing the clothes. Then they will decide the time required for washing and rinsing. The entire processing is done on a kind of processor which may be a microprocessor or microcontroller.

Drain pipe: The drain pipe enables removing the dirty water from the washing that has been used for the washing purpose.

Let us see the important parts of the microwave oven; this will also help us understand the working of the washing machine: 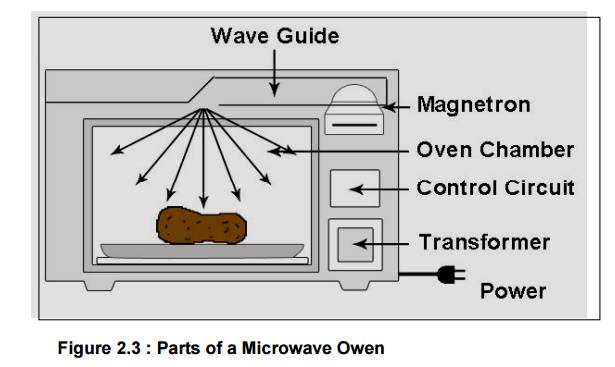 A microwave oven consists of:

A high voltage transformer, which passes energy to the magnetron

A Control circuit with a microcontroller,

A Transformer transfers electrical energy through a circuit by magnetic coupling without using motion between parts. These are used for supplying power to the magnetron.

A Cavity magnetron is a microwave antenna placed in a vacuum tube and oscillated in an electromagnetic field in order to produce high GHz microwaves. Magnetrons are used in microwave ovens and radar systems.

A control circuit with a microcontroller is integrated on a circuit board. The microcontroller controls the waveguide and the entire unit so the microwaves are emitted at a constant rate.

A Waveguide is any linear structure that guides electromagnetic waves for the purpose of transmitting power or signals. Generally constructed of a hollow metal pipe. Placing a waveguide into a vacuum causes radio waves to scatter.

The Automotive industry is one of the major application domains of embedded systems.

Automotive embedded systems are the one where electronics take control over the mechanical system. Ex. Simple viper control.

The number of embedded controllers in a normal vehicle varies somewhere between 20 to 40 and can easily be between 75 to 100 for more sophisticated vehicles.

One of the first and very popular use of embedded system in automotive industry was microprocessor based fuel injection.

Some of the other uses of embedded controllers in a vehicle are listed below:

AES are normally built around microcontrollers or DSPs or a hybrid of the two and are generally known as Electronic Control Units (ECUs).

They are deployed in applications where response time is not so critical.

They are built around low cost microprocessors and microcontrollers and digital signal processors.

Embedded system used inside an automobile communicate with each other using serial buses. This reduces the wiring required.

Following are the different types of serial Interfaces used in automotive embedded applications:

CAN bus was originally proposed by Robert Bosch.

CAN is an event driven protocol interface with support for error handling in data transmission.

MOST is targeted for automotive audio/video equipment interfacing

A MOST bus is a multimedia fiber optics point–to-point network implemented in a star , ring or daisy chained topology over optical fiber cables.