Core of The Embedded System

CORE OF THE EMBEDDED SYSTEM

After reading this chapter you will be able to:

Understand the classification of processors based on Bus Architecture, Instruction set

Have an overview of processors from most simple and cheap to most expensive and complex, powerful

Understand what are sensors and actuators, communication interfaces

The first two chapters attempted on explain what an embedded system is about and what the working parts are. This chapter attempts to go deeper and explain the core of embedded system along with other related topics.

Embedded systems are domain and application specific and are built around a central core. The core of the embedded system falls into any of the following categories:

Almost 80% of the embedded systems are processor/ controller based.

The processor may be microprocessor or a microcontroller or digital signal processor, depending on the domain and application.

·         A microprocessor is a silicon chip representing a central processing unit.

·         A microprocessor is a dependent unit and it requires the combination of other hardware like memory, timer unit, and interrupt controller, etc. for proper functioning.

·         Architectures used for processor design are Harvard or Von-Neumann. 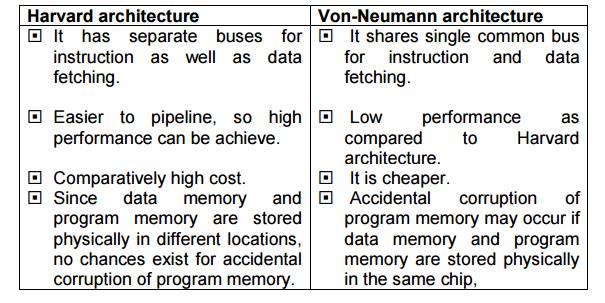 •It has separate buses for instruction as well as data fetching.

•Easier to pipeline, so high performance can be achieve.

•Since data memory and program memory are stored physically in different locations, no chances exist for accidental corruption of program memory.

•It shares single common bus for instruction and data fetching. 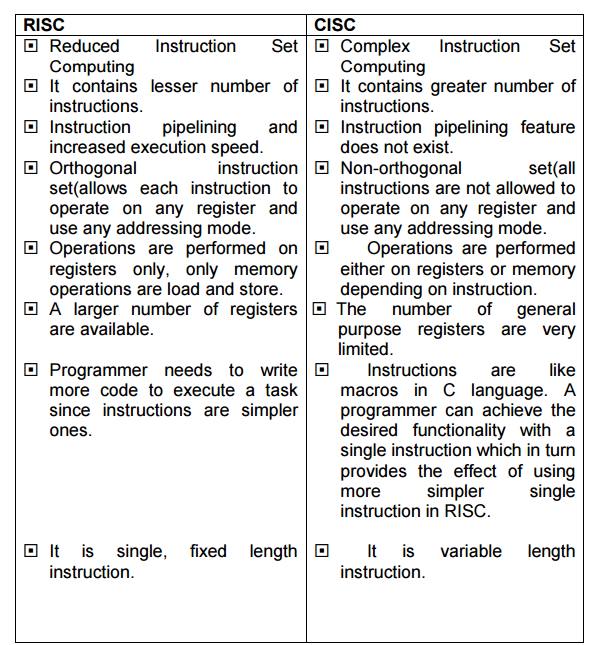 •It contains lesser number of instructions.

•Orthogonal instruction set(allows each instruction to operate on any register and use any addressing mode.

•A larger number of registers are available.

•Programmer needs to write more code to execute a task since instructions are simpler ones.

•It is single, fixed length instruction.

•It contains greater number of instructions.

•Instruction pipelining feature does not exist.

•Non-orthogonal set(all instructions are not allowed to operate on any register and use any addressing mode.

• Operations are performed either on registers or memory depending on instruction.

•The number of general purpose registers are very limited.

• It is variable length instruction.

• Can be Harvard or Von-  Neumann Architecture.

o Endianness specifies the order which the data is stored in the memory by processor operations in a multi byte system.

o  Based on Endiannes processors can be of two types:

Texas Instrument’s TMS 1000 Is considered as the world’s first microcontroller.

The instruction set of a microcontroller can be RISC or CISC.

up  the  execution  whereas  general  purpose  processor

implement the algorithm in software and the speed of

execution  depends  primarily on   the   clock  for  the

Program memory: It is a memory for storing the program required by DSP to process the data.

Data memory: It is a working memory for storing temporary variables and data/signal to be processed.

Computational engine: It performs the signal processing in accordance with the stored program memory computational engine incorporated many specialized arithmetic units and each of them operates simultaneously to increase the execution speed. It also includes multiple hardware shifters for shifting operands and saves execution time.

I/O unit: It acts as an interface between the outside world and DSP. It is responsible for capturing signals to be processed and delivering the processed signals.

ASICs is a microchip design to perform a specific and unique applications.

Because of using single chip for integrates several functions there by reduces the system development cost.

Most of the ASICs are proprietary (which having some trade name) products, it is referred as Application Specific Standard Products(ASSP).

As a single chip ASIC consumes a very small area in the total system. Thereby helps in the design of smaller system with high capabilities or functionalities.

The developers of such chips may not be interested in revealing the internal detail of it .

A PLD is an electronic component. It used to build digital circuits which are reconfigurable.

A logic gate has a fixed function but a PLD does not have a defined function at the time of manufacture.

PLDs can be reconfigured to perform any number of functions at any time.

A variety of tools are available for the designers of PLDs which are inexpensive and help to develop, simulate and test the designs.

CPLDs offer much smaller amount of logic up to 1000 gates.

It offers highest amount of performance as well as highest logic density, the most features.

PLDs offer customer much more flexibility during the design cycle.

PLDs do not require long lead times for prototypes or production parts because PLDs are already on a distributors shelf and ready for shipment.

A Commercial off the Shelf product is one which is used 'as-is'.

The COTS components itself may be develop around a general purpose or domain specific processor or an ASICs or a PLDs.

The major advantage of using COTS is that they are readily available in the market, are chip and a developer can cut down his/her development time to a great extent

No operational or manufacturing standard (all proprietary)

Vendor or manufacturer may discontinue production of a particular COTS product

A Sensor is used for taking Input

It is a transducer that converts energy from one form to

another for any    measurement or control purpose

Actuator is used for output.

It is a transducer that may be either mechanical or electrical which converts signals to corresponding physical actions. 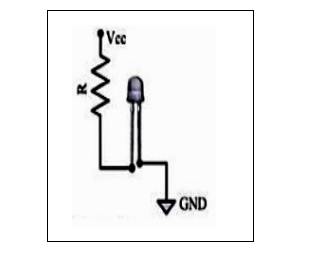 There are two ways to interface an LED to a microprocessor/microcontroller:

The Anode of LED is connected to the port pin and cathode to Ground : In this approach the port pin sources the current to the LED when it is at logic high(ie. 1).

For any embedded system, the communication interfaces can broadly classified into:

On board Communication Interfaces

These are used for internal communication of the embedded system i.e: communication between different components present on the system.

Common examples of onboard interfaces are:

•  Developed by Phillips semiconductors in 1980

It comprises of two buses :

Devices connected by I2C can act as either master or slave

The master device is responsible for controlling communication by initiating/ terminating data transfer.

Devices acting as slave wait for commands from the master and respond to those commands. 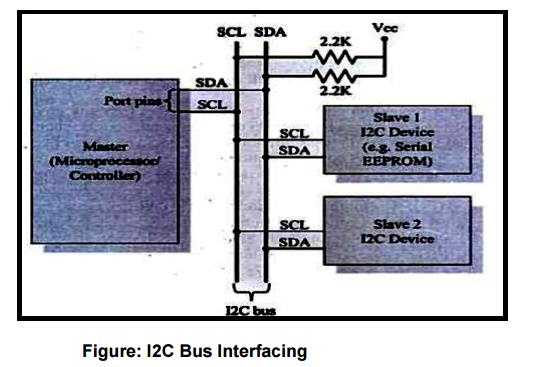 Common examples of external interfaces are:

RS 232 is the extension to UART for external communications

The vice versa is performed on the receiving side.

Converter chips contain converters for both transmitters and receivers

RS 232 is used only for point to point connections

RS 422 is another serial interface from EIA.

It supports multipoint connections with 1 transmitter and 10 receivers.