_ Each specific I/O synchronous serial device may be connected to other using specific interfaces, for example, with I/O device using I2C controller

_ Any device that is compatible with a I2Cbus can be added to the system(assuming an appropriate device driver program is available), and a I2C device can be integrated into any system that uses that I2C bus. 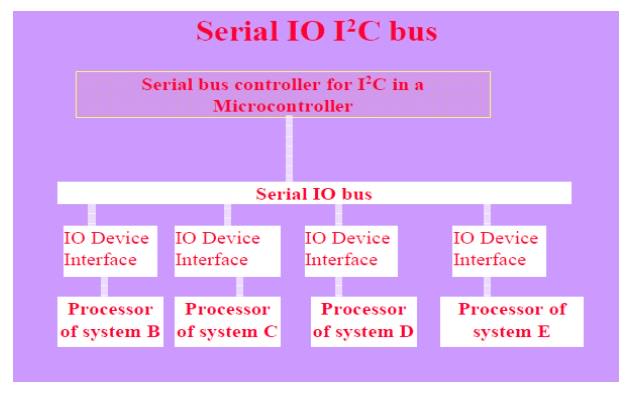 _ The Bus has two lines that carry its signals— one line is for the clock and one is for bi-directional data.

_ There is a standard protocol for the I2Cbus.

Device Addresses and Master in the I2C bus

_ Each device has a 7-bit address using which the data transfers take place. _ Master can address 127 other slaves at an instance.

_ Master has at a processing element functioning as bus controller or a microcontroller with I2C (Inter Integrated Circuit) bus interface circuit.

Slaves and Masters in the I2C bus

_ Number of masters can be connected on the bus.

_ However, at an instance, master is one, which initiates a data transfer on SDA(serial data) line and which transmits the SCL (serial clock) pulses. From master, a data frame has fields beginning from start bit 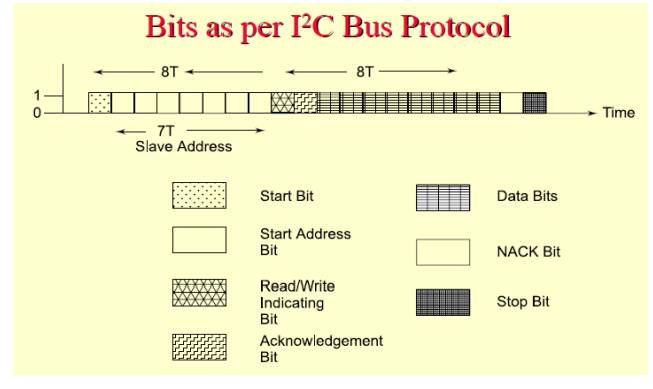 _ Second field of 7 bits─ address field. It defines the slave address, which is being sent the data frame (of many bytes) by the master

• Certain ICs support the protocol and certain do not.

• Open collector drivers at the master need a pull-up resistance of 2.2 K on each line

_ CAN-bus line usually interconnects to a CAN controller between line and host at the node. It gives the input and gets output between the physical and data link layers at the host node.

_ The CAN controller has a BIU (bus interface unit consisting of buffer and driver), protocol controller, status-cum control registers, receiver-buffer and message objects. These units connect the host node through the host interface circuit 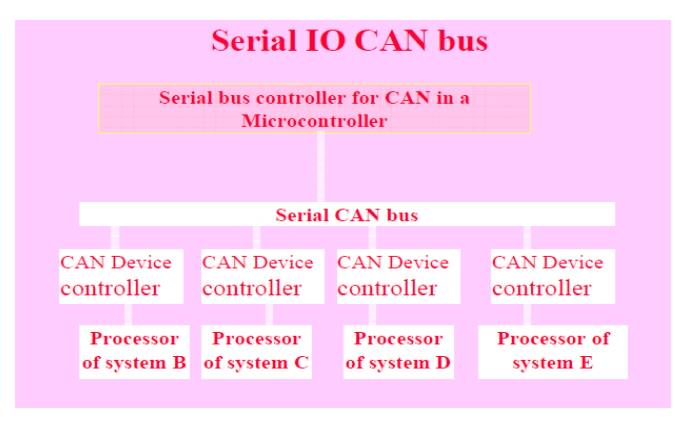 There is a CAN controller between the CAN line and the host node.

• Twisted Pair Connection up to 40 m –for bi-directional data 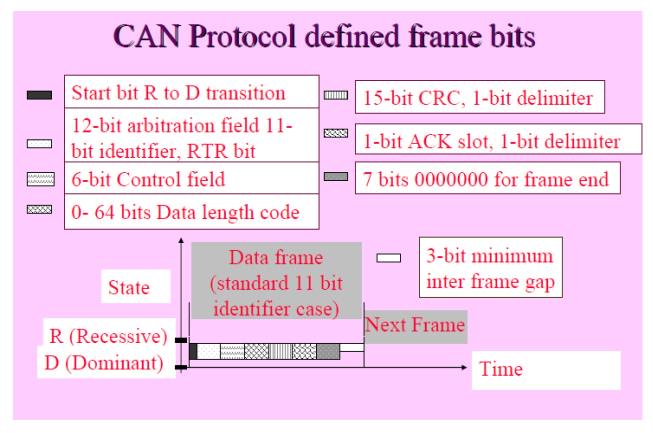 _ Identifies the device to which data is being sent or request is being made.

The first bit is for the identifier‘ sextension.

_ Third field of 0 to 64 bits─ Its length depends on the data length code in the control field.

• The receiver node uses it to detect the errors, if any, during the transmission

• Sender after sensing '0' in the ACK slot, generally retransmits the data frame.

Specified time slot, it should retransmit.

_ Serial transmission and reception between host and serial devices

_ Maximum 127 devices can connect a host.

Host connection to the devices or nodes

_ Host computer or system has a host controller, which connects to a root hub. _ A hub is one that connects to other nodes or hubs. 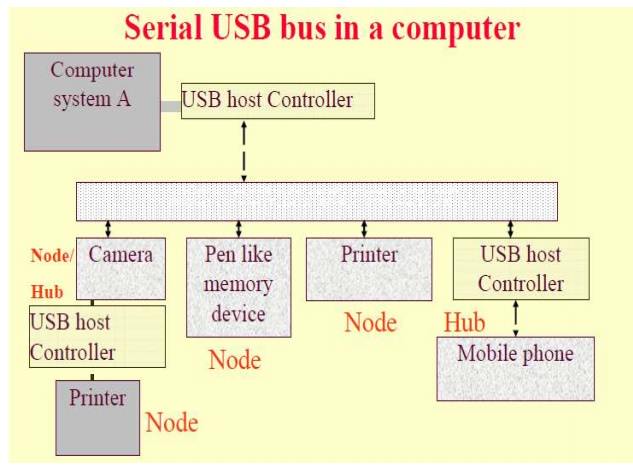 _ Bandwidth sharing with other devices: Host schedules the sharing of bandwidth among the attached devices at an instance.

_ Can be detached (while others are in operation) and reattached. _ Attaching and detaching USB device or host without rebooting

_ Has data structure hierarchy as follows:

_ A device can be either bus-powered or self- powered.

_ In addition, there is a power management by software at the host for USB ports

_ USB bus cable has four wires, one for+5V, two for twisted pairs and one for ground.

_ Termination impedances at each end as per the device-speed.

• Host controller regularly polls the presence of a device as scheduled by the software.

• It sends a token packet.

•  The device does the handshaking through a handshake packet, indicating successful or unsuccessful transmission.

• A CRC field in a data packet permitserror detection

1.     'Stream' with no USB- defined protocol. It is used when the connection is already established and the data flow starts

3.     'Message' for the control functions for of the device.

• Host configures each pipe with the data bandwidth to be used, transfer service type and buffer

32-bit or 64-bit with other devices or systems, for example, to a network interface card (NIC) or graphic card

•  When the I/O devices in the distributed embedded subsystems are networked all can communicate through a common parallel bus.

_ Card with 16 MB Flash ROM with a router gateway for a LAN and _ Card using DEC 21040 PCI Ethernet LAN controller.

• When the I/O devices in the distributed embedded subsystems are networked, all can communicate through a common parallel bus.

• PCI connects at high speed to other subsystems having a range of I/O devicesat very short distances (<25 cm) using a parallel bus without having to implement a specific interface for each I/O device.

_ PCI protocol specifies the ways of interaction between the different components of a computer.

_ PCI driver can access the hardware automatically as well as by the programmer assigned addresses.

_ Thus, simplified addition and deletion(attachment and detachment) of the system peripherals.

_ Each device may use a FIFO controller with a FIFO buffer for maximum throughput. Identification Numbers

_ A device identifies its address space by three identification numbers, (i) I/O port (ii) Memory locations and (iii)Configuration registers of total 256Bwith a four 4-byte unique ID. Each PCI device has address space allocation of256 bytes to access it by the host

_ A sixteen16-bit register in a PCI device identifies this number to let that device auto- detect it.

_ Another sixteen16-bit register identifies a device ID number. These two numbers let allow the device to carry out its auto-detection by its host computer.

_ Independent from the IBM architecture.

_ In most systems, the processor has a single data bus that connects to a switch module

_ Some processors integrate the switch module onto the same integrated circuit asthe processor to reduce the number of chips required to build a system and thus the system cost.

_ Communicates with the memory through a memory bus (a set of address, control and data buses), a dedicated set of wires that transfer data between these two systems.

_ A separate I/O bus connects the PCI switch to the I/O devices.

_ I/O system generally designed for maximum flexibility, to allow as many different I/O devices as possible to interface to the computer

_ Memory bus is designed to provide the maximum-possible bandwidth between the processor and the memory system.

•  Used in high bandwidth devices(Fiber Channel, and processors that are part of a cluster and Gigabit Ethernet)

• Supports two independent buses on the back plane (on different connectors)

Each PCI device on Bus

_ May contain a processor and software to perform a specific function.

_ Each device has the specific memory address-range, specific interrupt-vectors(pre-assigned or auto configured) and the device I/O port addresses.

• Accesses one device at a time

• All the devices within host device or system can share the I/O port and memory addresses, but

• If there are reasons for doing it so, a PCI driver can change the default bootup assignments on configuration transactions.

A device can initialize at booting time

Performs the configuration transactions and then, memory and address spaces automatically map to the address space in the device hosting system