Virtualizing a multi-core processor is relatively more complicated than virtualizing a uni-core processor. Though multicore processors are claimed to have higher performance by integrating multiple processor cores in a single chip, muti-core virtualiuzation has raised some new challenges to computer architects, compiler constructors, system designers, and application programmers. There are mainly two difficulties: Application programs must be parallelized to use all cores fully, and software must explicitly assign tasks to the cores, which is a very complex problem.

Concerning the first challenge, new programming models, languages, and libraries are needed to make parallel programming easier. The second challenge has spawned research involving scheduling algorithms and resource management policies. Yet these efforts cannot balance well among performance, complexity, and other issues. What is worse, as technology scales, a new challenge called dynamic heterogeneity is emerging to mix the fat CPU core and thin GPU cores on the same chip, which further complicates the multi-core or many-core resource management. The dynamic heterogeneity of hardware infrastructure mainly comes from less reliable transistors and increased complexity in using the transistors [33,66].

Wells, et al. [74] proposed a multicore virtualization method to allow hardware designers to get an abstraction of the low-level details of the processor cores. This technique alleviates the burden and inefficiency of managing hardware resources by software. It is located under the ISA and remains unmodified by the operating system or VMM (hypervisor). Figure 3.16 illustrates the technique of a software-visible VCPU moving from one core to another and temporarily suspending execution of a VCPU when there are no appropriate cores on which it can run.

The emerging many-core chip multiprocessors (CMPs) provides a new computing landscape. Instead of supporting time-sharing jobs on one or a few cores, we can use the abundant cores in a space-sharing, where single-threaded or multithreaded jobs are simultaneously assigned to separate groups of cores for long time intervals. This idea was originally suggested by Marty and Hill [39]. To optimize for space-shared workloads, they propose using virtual hierarchies to overlay a coherence and caching hierarchy onto a physical processor. Unlike a fixed physical hierarchy, a virtual hierarchy can adapt to fit how the work is space shared for improved performance and performance isolation.

Today’s many-core CMPs use a physical hierarchy of two or more cache levels that statically determine the cache allocation and mapping. A virtual hierarchy is a cache hierarchy that can adapt to fit the workload or mix of workloads [39]. The hierarchy’s first level locates data blocks close to the cores needing them for faster access, establishes a shared-cache domain, and establishes a point of coherence for faster communication. When a miss leaves a tile, it first attempts to locate the block (or sharers) within the first level. The first level can also pro-vide isolation between independent workloads. A miss at the L1 cache can invoke the L2 access.

The idea is illustrated in Figure 3.17(a). Space sharing is applied to assign three workloads to three clusters of virtual cores: namely VM0 and VM3 for database workload, VM1 and VM2 for web server workload, and VM4–VM7 for middleware workload. The basic assumption is that each workload runs in its own VM. However, space sharing applies equally within a single operating system. Statically distributing the directory among tiles can do much better, provided operating sys-tems or hypervisors carefully map virtual pages to physical frames. Marty and Hill suggested a two-level virtual coherence and caching hierarchy that harmonizes with the assignment of tiles to the virtual clusters of VMs.

Figure 3.17(b) illustrates a logical view of such a virtual cluster hierarchy in two levels. Each VM operates in a isolated fashion at the first level. This will minimize both miss access time and performance interference with other workloads or VMs. Moreover, the shared resources of cache capacity, inter-connect links, and miss handling are mostly isolated between VMs. The second level maintains a globally shared memory. This facilitates dynamically repartitioning resources without costly cache flushes. Furthermore, maintaining globally shared memory minimizes changes to existing system software and allows virtualization features such as content-based page sharing. A virtual hierarchy adapts to space-shared workloads like multiprogramming and server consolidation. Figure 3.17 shows a case study focused on consolidated server workloads in a tiled architecture. This many-core mapping scheme can also optimize for space-shared multiprogrammed workloads in a single-OS environment. 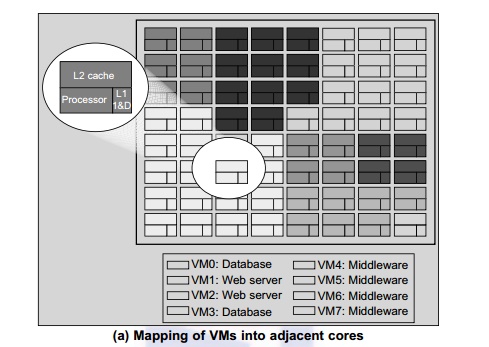