Data centers must be virtualized to serve as cloud providers. Table 3.6 summarizes four virtual infrastructure (VI) managers and OSes. These VI managers and OSes are specially tailored for virtualizing data centers which often own a large number of servers in clusters. Nimbus, Eucalyptus, 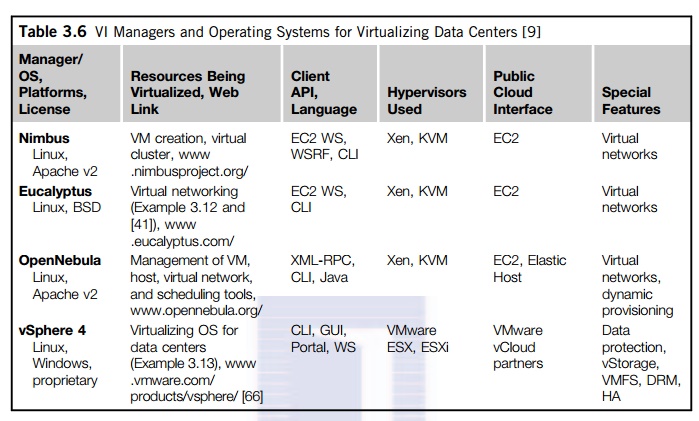 and OpenNebula are all open source software available to the general public. Only vSphere 4 is a proprietary OS for cloud resource virtualization and management over data centers.

These VI managers are used to create VMs and aggregate them into virtual clusters as elastic resources. Nimbus and Eucalyptus support essentially virtual networks. OpenNebula has additional features to provision dynamic resources and make advance reservations. All three public VI managers apply Xen and KVM for virtualization. vSphere 4 uses the hypervisors ESX and ESXi from VMware. Only vSphere 4 supports virtual storage in addition to virtual networking and data protection. We will study Eucalyptus and vSphere 4 in the next two examples.

Eucalyptus is an open source software system (Figure 3.27) intended mainly for supporting Infrastructure as a Service (IaaS) clouds. The system primarily supports virtual networking and the management of VMs; virtual storage is not supported. Its purpose is to build private clouds that can interact with end users through Ethernet or the Internet. The system also supports interaction with other private clouds or public clouds over the Internet. The system is short on security and other desired features for general-purpose grid or cloud applications.

The designers of Eucalyptus [45] implemented each high-level system component as a stand-alone web service. Each web service exposes a well-defined language-agnostic API in the form of a WSDL document containing both operations that the service can perform and input/output data structures. 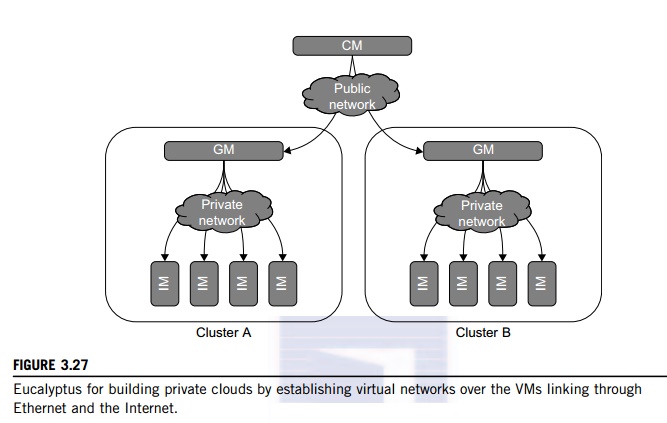 Furthermore, the designers leverage existing web-service features such as WS-Security policies for secure communication between components. The three resource managers in Figure 3.27 are specified below:

•    Instance Manager controls the execution, inspection, and terminating of VM instances on the host where it runs.

•    Cloud Manager is the entry-point into the cloud for users and administrators. It queries node managers for information about resources, makes scheduling decisions, and implements them by making requests to group managers.

In terms of functionality, Eucalyptus works like AWS APIs. Therefore, it can interact with EC2. It does provide a storage API to emulate the Amazon S3 API for storing user data and VM images. It is installed on Linux-based platforms, is compatible with EC2 with SOAP and Query, and is S3-compatible with SOAP and REST. CLI and web portal services can be applied with Eucalyptus. 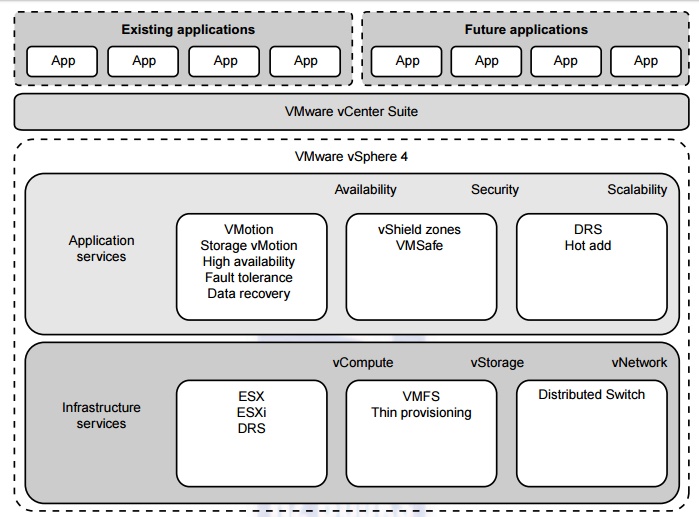 The vSphere 4 is built with two functional software suites: infrastructure services and application services. It also has three component packages intended mainly for virtualization purposes: vCompute is supported by ESX, ESXi, and DRS virtualization libraries from VMware; vStorage is supported by VMS and thin provisioning libraries; and vNetwork offers distributed switching and networking functions. These packages interact with the hardware servers, disks, and networks in the data center. These infrastructure functions also communicate with other external clouds.

The application services are also divided into three groups: availability, security, and scalability. Availability support includes VMotion, Storage VMotion, HA, Fault Tolerance, and Data Recovery from VMware. The security package supports vShield Zones and VMsafe. The scalability package was built with DRS and Hot Add. Interested readers should refer to the vSphere 4 web site for more details regarding these component software functions. To fully understand the use of vSphere 4, users must also learn how to use the vCenter interfaces in order to link with existing applications or to develop new applications.