A traditional computer runs with a host operating system specially tailored for its hardware architecture, as shown in Figure 3.1(a).

A traditional computer runs with a host operating system specially tailored for its hardware architecture, as shown in Figure 3.1(a). After virtualization, different user applications managed by their own operating systems (guest OS) can run on the same hardware, independent of the host OS. This is often done by adding additional software, called a virtualization layer as shown in Figure 3.1(b). This virtualization layer is known as hypervisor or virtual machine monitor (VMM) [54]. The VMs are shown in the upper boxes, where applications run with their own guest OS over the virtualized CPU, memory, and I/O resources.

The main function of the software layer for virtualization is to virtualize the physical hardware of a host machine into virtual resources to be used by the VMs, exclusively. This can be implemented at various operational levels, as we will discuss shortly. The virtualization software creates the abstraction of VMs by interposing a virtualization layer at various levels of a computer system. Common virtualization layers include the instruction set architecture (ISA) level, hardware level, operating system level, library support level, and application level (see Figure 3.2). 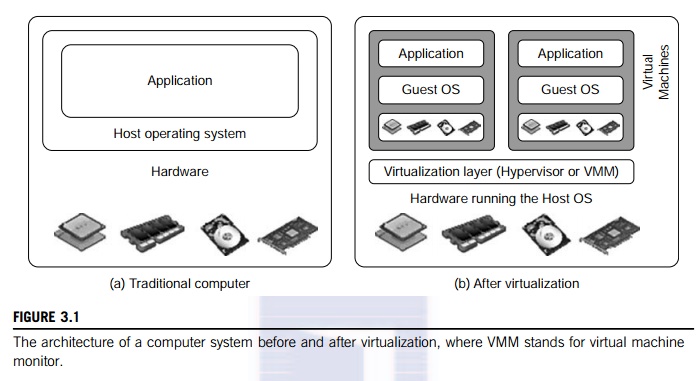 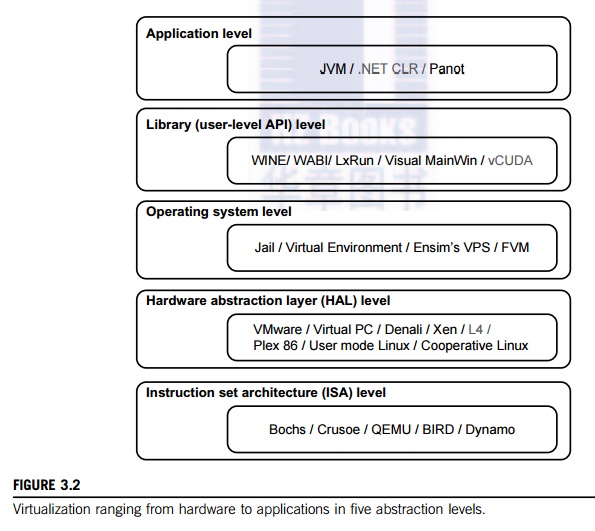 At the ISA level, virtualization is performed by emulating a given ISA by the ISA of the host machine. For example, MIPS binary code can run on an x86-based host machine with the help of ISA emulation. With this approach, it is possible to run a large amount of legacy binary code writ-ten for various processors on any given new hardware host machine. Instruction set emulation leads to virtual ISAs created on any hardware machine.

Hardware-level virtualization is performed right on top of the bare hardware. On the one hand, this approach generates a virtual hardware environment for a VM. On the other hand, the process manages the underlying hardware through virtualization. The idea is to virtualize a computer’s resources, such as its processors, memory, and I/O devices. The intention is to upgrade the hardware utilization rate by multiple users concurrently. The idea was implemented in the IBM VM/370 in the 1960s. More recently, the Xen hypervisor has been applied to virtualize x86-based machines to run Linux or other guest OS applications. We will discuss hardware virtualization approaches in more detail in Section 3.3.

This refers to an abstraction layer between traditional OS and user applications. OS-level virtualiza-tion creates isolated containers on a single physical server and the OS instances to utilize the hard-ware and software in data centers. The containers behave like real servers. OS-level virtualization is commonly used in creating virtual hosting environments to allocate hardware resources among a large number of mutually distrusting users. It is also used, to a lesser extent, in consolidating server hardware by moving services on separate hosts into containers or VMs on one server. OS-level virtualization is depicted in Section 3.1.3.

Most applications use APIs exported by user-level libraries rather than using lengthy system calls by the OS. Since most systems provide well-documented APIs, such an interface becomes another candidate for virtualization. Virtualization with library interfaces is possible by controlling the communication link between applications and the rest of a system through API hooks. The software tool WINE has implemented this approach to support Windows applications on top of UNIX hosts. Another example is the vCUDA which allows applications executing within VMs to leverage GPU hardware acceleration. This approach is detailed in Section 3.1.4.

VMs. In this scenario, the virtualization layer sits as an application program on top of the operating system, and the layer exports an abstraction of a VM that can run programs written and compiled to a particular abstract machine definition. Any program written in the HLL and compiled for this VM will be able to run on it. The Microsoft .NET CLR and Java Virtual Machine (JVM) are two good examples of this class of VM.

Other forms of application-level virtualization are known as application isolation, application sandboxing, or application streaming. The process involves wrapping the application in a layer that is isolated from the host OS and other applications. The result is an application that is much easier to distribute and remove from user workstations. An example is the LANDesk application virtuali-zation platform which deploys software applications as self-contained, executable files in an isolated environment without requiring installation, system modifications, or elevated security privileges.

Table 3.1 compares the relative merits of implementing virtualization at various levels. The column headings correspond to four technical merits. “Higher Performance” and “Application Flexibility” are self-explanatory. “Implementation Complexity” implies the cost to implement that particular vir-tualization level. “Application Isolation” refers to the effort required to isolate resources committed to different VMs. Each row corresponds to a particular level of virtualization.

The number of X’s in the table cells reflects the advantage points of each implementation level. Five X’s implies the best case and one X implies the worst case. Overall, hardware and OS support will yield the highest performance. However, the hardware and application levels are also the most expensive to implement. User isolation is the most difficult to achieve. ISA implementation offers the best application flexibility.