All the functions of a device or bus infrastructure, such as device enumeration, identification, interrupts, and DMA, are replicated in software. This software is located in the VMM and acts as a virtual device. The I/O access requests of the guest OS are trapped in the VMM which interacts with the I/O devices. The full device emulation approach is shown in Figure 3.14.

A single hardware device can be shared by multiple VMs that run concurrently. However, software emulation runs much slower than the hardware it emulates [10,15]. The para-virtualization method of I/O virtualization is typically used in Xen. It is also known as the split driver model consisting of a frontend driver and a backend driver. The frontend driver is running in Domain U and the backend dri-ver is running in Domain 0. They interact with each other via a block of shared memory. The frontend driver manages the I/O requests of the guest OSes and the backend driver is responsible for managing the real I/O devices and multiplexing the I/O data of different VMs. Although para-I/O-virtualization achieves better device performance than full device emulation, it comes with a higher CPU overhead.

Direct I/O virtualization lets the VM access devices directly. It can achieve close-to-native performance without high CPU costs. However, current direct I/O virtualization implementations focus on networking for mainframes. There are a lot of challenges for commodity hardware devices. For example, when a physical device is reclaimed (required by workload migration) for later reassign-ment, it may have been set to an arbitrary state (e.g., DMA to some arbitrary memory locations) that can function incorrectly or even crash the whole system. Since software-based I/O virtualization requires a very high overhead of device emulation, hardware-assisted I/O virtualization is critical. Intel VT-d supports the remapping of I/O DMA transfers and device-generated interrupts. The architecture of VT-d provides the flexibility to support multiple usage models that may run unmodified, special-purpose, or “virtualization-aware” guest OSes.

Another way to help I/O virtualization is via self-virtualized I/O (SV-IO) [47]. The key idea of SV-IO is to harness the rich resources of a multicore processor. All tasks associated with virtualizing an I/O device are encapsulated in SV-IO. It provides virtual devices and an associated access API to VMs and a management API to the VMM. SV-IO defines one virtual interface (VIF) for every kind of virtua-lized I/O device, such as virtual network interfaces, virtual block devices (disk), virtual camera devices, and others. The guest OS interacts with the VIFs via VIF device drivers. Each VIF consists of two mes-sage queues. One is for outgoing messages to the devices and the other is for incoming messages from the devices. In addition, each VIF has a unique ID for identifying it in SV-IO.

The VMware Workstation runs as an application. It leverages the I/O device support in guest OSes, host OSes, and VMM to implement I/O virtualization. The application portion (VMApp) uses a driver loaded into the host operating system (VMDriver) to establish the privileged VMM, which runs directly on the hardware. A given physical processor is executed in either the host world or the VMM world, with the VMDriver facilitating the transfer of control between the two worlds. The VMware Workstation employs full device emulation to implement I/O virtualization. Figure 3.15 shows the functional blocks used in sending and receiving packets via the emulated virtual NIC. 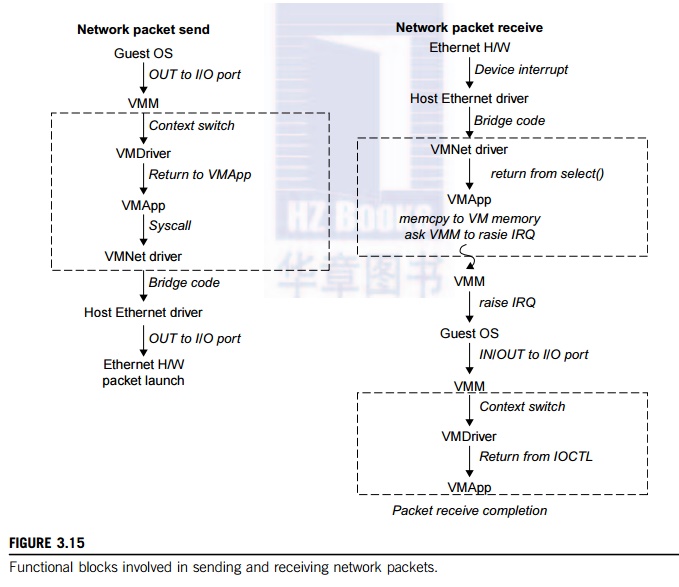 The virtual NIC models an AMD Lance Am79C970A controller. The device driver for a Lance controller in the guest OS initiates packet transmissions by reading and writing a sequence of virtual I/O ports; each read or write switches back to the VMApp to emulate the Lance port accesses. When the last OUT instruc-tion of the sequence is encountered, the Lance emulator calls a normal write() to the VMNet driver. The VMNet driver then passes the packet onto the network via a host NIC and then the VMApp switches back to the VMM. The switch raises a virtual interrupt to notify the guest device driver that the packet was sent. Packet receives occur in reverse.