A micro-kernel hypervisor includes only the basic and unchanging functions (such as physical memory management and processor scheduling). The device drivers and other changeable components are outside the hypervisor. A monolithic hypervisor implements all the aforementioned functions, including those of the device drivers. Therefore, the size of the hypervisor code of a micro-kernel hyper-visor is smaller than that of a monolithic hypervisor. Essentially, a hypervisor must be able to convert physical devices into virtual resources dedicated for the deployed VM to use.

Xen is an open source hypervisor program developed by Cambridge University. Xen is a micro-kernel hypervisor, which separates the policy from the mechanism. The Xen hypervisor implements all the mechanisms, leaving the policy to be handled by Domain 0, as shown in Figure 3.5. Xen does not include any device drivers natively [7]. It just provides a mechanism by which a guest OS can have direct access to the physical devices. As a result, the size of the Xen hypervisor is kept rather small. Xen provides a virtual environment located between the hardware and the OS. A number of vendors are in the process of developing commercial Xen hypervisors, among them are Citrix XenServer [62] and Oracle VM [42].

The core components of a Xen system are the hypervisor, kernel, and applications. The organi-zation of the three components is important. Like other virtualization systems, many guest OSes can run on top of the hypervisor. However, not all guest OSes are created equal, and one in

particular controls the others. The guest OS, which has control ability, is called Domain 0, and the others are called Domain U. Domain 0 is a privileged guest OS of Xen. It is first loaded when Xen boots without any file system drivers being available. Domain 0 is designed to access hardware directly and manage devices. Therefore, one of the responsibilities of Domain 0 is to allocate and map hardware resources for the guest domains (the Domain U domains).

For example, Xen is based on Linux and its security level is C2. Its management VM is named Domain 0, which has the privilege to manage other VMs implemented on the same host. If Domain 0 is compromised, the hacker can control the entire system. So, in the VM system, security policies are needed to improve the security of Domain 0. Domain 0, behaving as a VMM, allows users to create, copy, save, read, modify, share, migrate, and roll back VMs as easily as manipulating a file, which flexibly provides tremendous benefits for users. Unfortunately, it also brings a series of security problems during the software life cycle and data lifetime.

Traditionally, a machine’s lifetime can be envisioned as a straight line where the current state of the machine is a point that progresses monotonically as the software executes. During this time, con-figuration changes are made, software is installed, and patches are applied. In such an environment, the VM state is akin to a tree: At any point, execution can go into N different branches where multiple instances of a VM can exist at any point in this tree at any given time. VMs are allowed to roll back to previous states in their execution (e.g., to fix configuration errors) or rerun from the same point many times (e.g., as a means of distributing dynamic content or circulating a “live” system image).

Depending on implementation technologies, hardware virtualization can be classified into two cate-gories: full virtualization and host-based virtualization. Full virtualization does not need to modify the host OS. It relies on binary translation to trap and to virtualize the execution of certain sensitive, nonvirtualizable instructions. The guest OSes and their applications consist of noncritical and critical instructions. In a host-based system, both a host OS and a guest OS are used. A virtuali-zation software layer is built between the host OS and guest OS. These two classes of VM architec-ture are introduced next.

This approach was implemented by VMware and many other software companies. As shown in Figure 3.6, VMware puts the VMM at Ring 0 and the guest OS at Ring 1. The VMM scans the instruction stream and identifies the privileged, control- and behavior-sensitive instructions. When these instructions are identified, they are trapped into the VMM, which emulates the behavior of these instructions. The method used in this emulation is called binary translation. Therefore, full vir-tualization combines binary translation and direct execution. The guest OS is completely decoupled from the underlying hardware. Consequently, the guest OS is unaware that it is being virtualized. 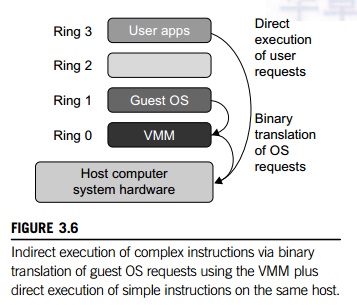 can also run with the host OS directly. This host-based architecture has some distinct advantages, as enumerated next. First, the user can install this VM architecture without modifying the host OS.  The virtualizing software can rely on the host OS to provide device drivers and other low-level services. This will simplify the VM design and ease its deployment.

Figure 3.7 illustrates the concept of a paravirtualized VM architecture. The guest operating systems are para-virtualized. They are assisted by an intelligent compiler to replace the nonvirtualizable OS instructions by hypercalls as illustrated in Figure 3.8. The traditional x86 processor offers four instruction execution rings: Rings 0, 1, 2, and 3. The lower the ring number, the higher the privilege of instruction being executed. The OS is responsible for managing the hardware and the privileged instructions to execute at Ring 0, while user-level applications run at Ring 3. The best example of para-virtualization is the KVM to be described below. 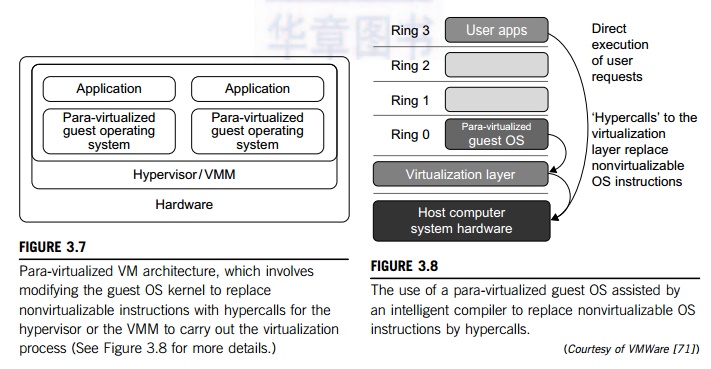 This is a Linux para-virtualization system—a part of the Linux version 2.6.20 kernel. Memory management and scheduling activities are carried out by the existing Linux kernel. The KVM does the rest, which makes it simpler than the hypervisor that controls the entire machine. KVM is a hardware-assisted para-virtualization tool, which improves performance and supports unmodified guest OSes such as Windows, Linux, Solaris, and other UNIX variants.

The guest OS running in a guest domain may run at Ring 1 instead of at Ring 0. This implies that the guest OS may not be able to execute some privileged and sensitive instructions. The privileged instructions are implemented by hypercalls to the hypervisor. After replacing the instructions with hypercalls, the modified guest OS emulates the behavior of the original guest OS. On an UNIX system, a system call involves an interrupt or service routine. The hypercalls apply a dedicated service routine in Xen.

VMware pioneered the software market for virtualization. The company has developed virtualization tools for desktop systems and servers as well as virtual infrastructure for large data centers. ESX is a VMM or a hypervisor for bare-metal x86 symmetric multiprocessing (SMP) servers. It accesses hardware resources such as I/O directly and has complete resource management control. An ESX-enabled server consists of four components: a virtualization layer, a resource manager, hardware interface components, and a service console, as shown in Figure 3.9. To improve performance, the ESX server employs a para-virtualization architecture in which the VM kernel interacts directly with the hardware without involving the host OS. 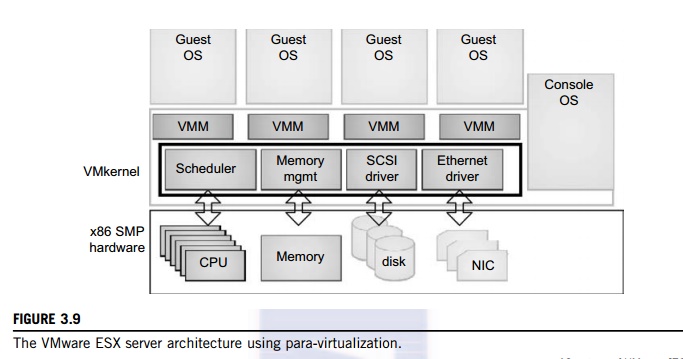 VMware ESX Server File System. The service console is responsible for booting the system, initiating the execution of the VMM and resource manager, and relinquishing control to those layers. It also facilitates the process for system administrators.