A VM is a duplicate of an existing computer system in which a majority of the VM instructions are executed on the host processor in native mode.

This technique attempts to simplify virtualization because full or paravirtualization is complicated. Intel and AMD add an additional mode called privilege mode level (some people call it Ring-1) to x86 processors. Therefore, operating systems can still run at Ring 0 and the hypervisor can run at Ring -1. All the privileged and sensitive instructions are trapped in the hypervisor automatically. This technique removes the difficulty of implementing binary translation of full virtualization. It also lets the operating system run in VMs without modification.

Although x86 processors are not virtualizable primarily, great effort is taken to virtualize them. They are used widely in comparing RISC processors that the bulk of x86-based legacy systems cannot discard easily. Virtuali-zation of x86 processors is detailed in the following sections. Intel’s VT-x technology is an example of hardware-assisted virtualization, as shown in Figure 3.11. Intel calls the privilege level of x86 processors the VMX Root Mode. In order to control the start and stop of a VM and allocate a memory page to maintain the 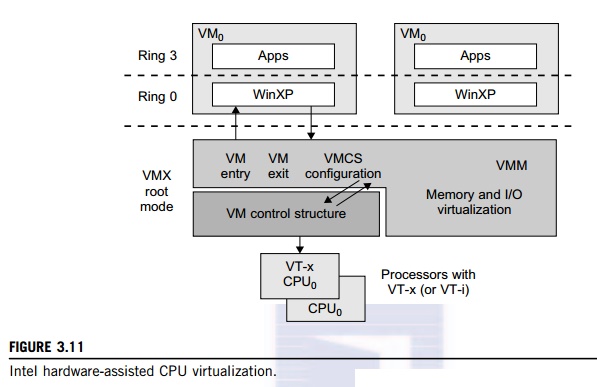 CPU state for VMs, a set of additional instructions is added. At the time of this writing, Xen, VMware, and the Microsoft Virtual PC all implement their hypervisors by using the VT-x technology.