Since clusters have a high initial cost of ownership, including space, power conditioning, and cooling equipment, leasing or sharing access to a common cluster is an attractive solution when demands vary over time.

Since clusters have a high initial cost of ownership, including space, power conditioning, and cooling equipment, leasing or sharing access to a common cluster is an attractive solution when demands vary over time. Shared clusters offer economies of scale and more effective utilization of resources by multiplexing. Early configuration and management systems focus on expressive and scalable mechanisms for defining clusters for specific types of service, and physically partition cluster nodes among those types. When one system migrates to another physical node, we should consider the following issues.

This is one of the most important aspects of VM migration. Moving the memory instance of a VM from one physical host to another can be approached in any number of ways. But traditionally, the concepts behind the techniques tend to share common implementation paradigms. The techniques employed for this purpose depend upon the characteristics of application/workloads supported by the guest OS.

Memory migration can be in a range of hundreds of megabytes to a few gigabytes in a typical system today, and it needs to be done in an efficient manner. The Internet Suspend-Resume (ISR) technique exploits temporal locality as memory states are likely to have considerable overlap in the suspended and the resumed instances of a VM. Temporal locality refers to the fact that the memory states differ only by the amount of work done since a VM was last suspended before being initiated for migration.

To exploit temporal locality, each file in the file system is represented as a tree of small subfiles. A copy of this tree exists in both the suspended and resumed VM instances. The advantage of using a tree-based representation of files is that the caching ensures the transmission of only those files which have been changed. The ISR technique deals with situations where the migration of live machines is not a necessity. Predictably, the downtime (the period during which the service is unavailable due to there being no currently executing instance of a VM) is high, compared to some of the other techniques discussed later.

To support VM migration, a system must provide each VM with a consistent, location-independent view of the file system that is available on all hosts. A simple way to achieve this is to provide each VM with its own virtual disk which the file system is mapped to and transport the contents of this virtual disk along with the other states of the VM. However, due to the current trend of high-capacity disks, migration of the contents of an entire disk over a network is not a viable solution. Another way is to have a global file system across all machines where a VM could be located. This way removes the need to copy files from one machine to another because all files are network-accessible.

In smart copying, the VMM exploits spatial locality. Typically, people often move between the same small number of locations, such as their home and office. In these conditions, it is possible to transmit only the difference between the two file systems at suspending and resuming locations. This technique significantly reduces the amount of actual physical data that has to be moved. In situations where there is no locality to exploit, a different approach is to synthesize much of the state at the resum-ing site. On many systems, user files only form a small fraction of the actual data on disk. Operating system and application software account for the majority of storage space. The proactive state transfer solution works in those cases where the resuming site can be predicted with reasonable confidence.

A migrating VM should maintain all open network connections without relying on forwarding mechanisms on the original host or on support from mobility or redirection mechanisms. To enable remote systems to locate and communicate with a VM, each VM must be assigned a virtual IP address known to other entities. This address can be distinct from the IP address of the host machine where the VM is currently located. Each VM can also have its own distinct virtual MAC address. The VMM maintains a mapping of the virtual IP and MAC addresses to their corresponding VMs. In general, a migrating VM includes all the protocol states and carries its IP address with it.

If the source and destination machines of a VM migration are typically connected to a single switched LAN, an unsolicited ARP reply from the migrating host is provided advertising that the IP has moved to a new location. This solves the open network connection problem by reconfiguring all the peers to send future packets to a new location. Although a few packets that have already been transmitted might be lost, there are no other problems with this mechanism. Alternatively, on a switched network, the migrating OS can keep its original Ethernet MAC address and rely on the network switch to detect its move to a new port.

Live migration means moving a VM from one physical node to another while keeping its OS environment and applications unbroken. This capability is being increasingly utilized in today’s enter-prise environments to provide efficient online system maintenance, reconfiguration, load balancing, and proactive fault tolerance. It provides desirable features to satisfy requirements for computing resources in modern computing systems, including server consolidation, performance isolation, and ease of management. As a result, many implementations are available which support the feature using disparate functionalities. Traditional migration suspends VMs before the transportation and then resumes them at the end of the process. By importing the precopy mechanism, a VM could be live-migrated without stopping the VM and keep the applications running during the migration.

Live migration is a key feature of system virtualization technologies. Here, we focus on VM migration within a cluster environment where a network-accessible storage system, such as storage area network (SAN) or network attached storage (NAS), is employed. Only memory and CPU status needs to be transferred from the source node to the target node. Live migration techniques mainly use the precopy approach, which first transfers all memory pages, and then only copies modified pages during the last round iteratively. The VM service downtime is expected to be minimal by using iterative copy operations. When applications’ writable working set becomes small, the VM is suspended and only the CPU state and dirty pages in the last round are sent out to the destination.

In the precopy phase, although a VM service is still available, much performance degradation will occur because the migration daemon continually consumes network bandwidth to transfer dirty pages in each round. An adaptive rate limiting approach is employed to mitigate this issue, but total migration time is prolonged by nearly 10 times. Moreover, the maximum number of iterations must be set because not all applications’ dirty pages are ensured to converge to a small writable working set over multiple rounds.

In fact, these issues with the precopy approach are caused by the large amount of transferred data during the whole migration process. A checkpointing/recovery and trace/replay approach (CR/ TR-Motion) is proposed to provide fast VM migration. This approach transfers the execution trace file in iterations rather than dirty pages, which is logged by a trace daemon. Apparently, the total size of all log files is much less than that of dirty pages. So, total migration time and downtime of migration are drastically reduced. However, CR/TR-Motion is valid only when the log replay rate is larger than the log growth rate. The inequality between source and target nodes limits the application scope of live migration in clusters.

Another strategy of postcopy is introduced for live migration of VMs. Here, all memory pages are transferred only once during the whole migration process and the baseline total migration time is reduced. But the downtime is much higher than that of precopy due to the latency of fetching pages from the source node before the VM can be resumed on the target. With the advent of multicore or many-core machines, abundant CPU resources are available. Even if several VMs reside on a same mul-ticore machine, CPU resources are still rich because physical CPUs are frequently amenable to multi-plexing. We can exploit these copious CPU resources to compress page frames and the amount of transferred data can be significantly reduced. Memory compression algorithms typically have little memory overhead. Decompression is simple and very fast and requires no memory for decompression.

In Section 3.2.1, we studied Xen as a VMM or hypervisor, which allows multiple commodity OSes to share x86 hardware in a safe and orderly fashion. The following example explains how to perform live migration of a VM between two Xen-enabled host machines. Domain 0 (or Dom0) performs tasks to create, terminate, or migrate to another host. Xen uses a send/recv model to transfer states across VMs.

Xen supports live migration. It is a useful feature and natural extension to virtualization platforms that allows for the transfer of a VM from one physical machine to another with little or no downtime of the services hosted by the VM. Live migration transfers the working state and memory of a VM across a net-work when it is running. Xen also supports VM migration by using a mechanism called Remote Direct

RDMA speeds up VM migration by avoiding TCP/IP stack processing overhead. RDMA implements a different transfer protocol whose origin and destination VM buffers must be registered before any transfer 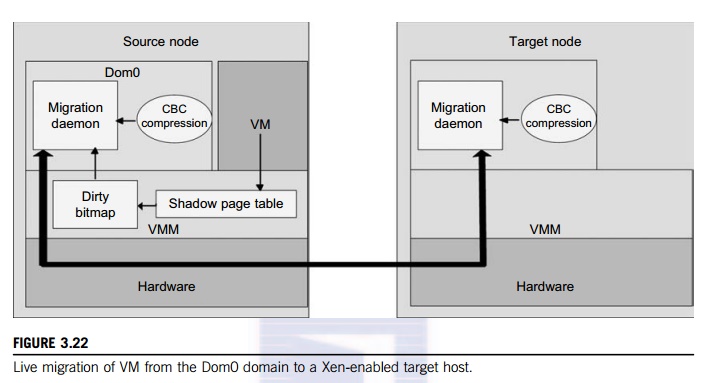 operations occur, reducing it to a “one-sided” interface. Data communication over RDMA does not need to involve the CPU, caches, or context switches. This allows migration to be carried out with minimal impact on guest operating systems and hosted applications. Figure 3.22 shows the a compression scheme for VM migration.

This design requires that we make trade-offs between two factors. If an algorithm embodies expecta-tions about the kinds of regularities in the memory footprint, it must be very fast and effective. A single compression algorithm for all memory data is difficult to achieve the win-win status that we expect. Therefore, it is necessary to provide compression algorithms to pages with different kinds of regularities. The structure of this live migration system is presented in Dom0.

Migration daemons running in the management VMs are responsible for performing migration. Shadow page tables in the VMM layer trace modifications to the memory page in migrated VMs during the precopy phase. Corresponding flags are set in a dirty bitmap. At the start of each precopy round, the bitmap is sent to the migration daemon. Then, the bitmap is cleared and the shadow page tables are destroyed and re-created in the next round. The system resides in Xen’s management VM. Memory pages denoted by bitmap are extracted and compressed before they are sent to the destination. The compressed data is then decompressed on the target.