Library-level virtualization is also known as user-level Application Binary Interface (ABI) or API emulation. This type of virtualization can create execution environments for running alien programs on a platform rather than creating a VM to run the entire operating system. API call interception and remapping are the key functions performed. This section provides an overview of several library-level virtualization systems: namely the Windows Application Binary Interface (WABI), lxrun, WINE, Visual MainWin, and vCUDA, which are summarized in Table 3.4. 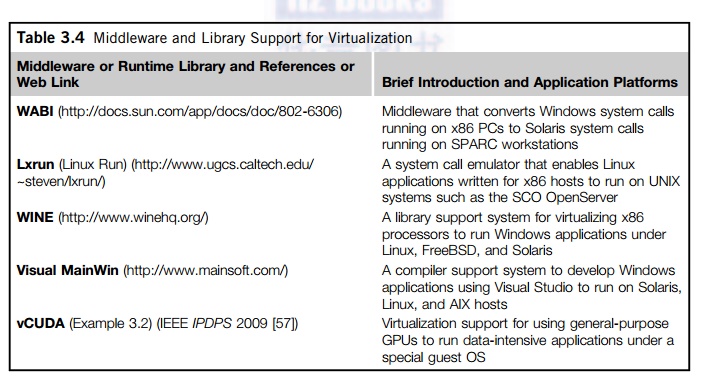 Example 3.2 The vCUDA for Virtualization of General-Purpose GPUs

CUDA is a programming model and library for general-purpose GPUs. It leverages the high performance of GPUs to run compute-intensive applications on host operating systems. However, it is difficult to run CUDA applications on hardware-level VMs directly. vCUDA virtualizes the CUDA library and can be installed on guest OSes. When CUDA applications run on a guest OS and issue a call to the CUDA API, vCUDA intercepts the call and redirects it to the CUDA API running on the host OS. Figure 3.4 shows the basic concept of the vCUDA architecture [57].

The vCUDA employs a client-server model to implement CUDA virtualization. It consists of three user space components: the vCUDA library, a virtual GPU in the guest OS (which acts as a client), and the vCUDA stub in the host OS (which acts as a server). The vCUDA library resides in the guest OS as a substitute for the standard CUDA library. It is responsible for intercepting and redirecting API calls from the client to the stub. Besides these tasks, vCUDA also creates vGPUs and manages them.

The functionality of a vGPU is threefold: It abstracts the GPU structure and gives applications a uni-form view of the underlying hardware; when a CUDA application in the guest OS allocates a device’s mem-ory the vGPU can return a local virtual address to the application and notify the remote stub to allocate the real device memory, and the vGPU is responsible for storing the CUDA API flow. The vCUDA stub receives 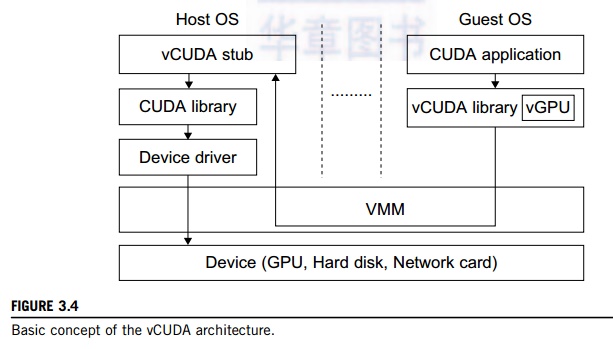 and interprets remote requests and creates a corresponding execution context for the API calls from the guest OS, then returns the results to the guest OS. The vCUDA stub also manages actual physical resource allocation.