A VMM changes the computer architecture. It provides a layer of software between the operating systems and system hardware to create one or more VMs on a single physical platform.

A VMM changes the computer architecture. It provides a layer of software between the operating systems and system hardware to create one or more VMs on a single physical platform. A VM entirely encapsulates the state of the guest operating system running inside it. Encapsulated machine state can be copied and shared over the network and removed like a normal file, which proposes a challenge to VM security. In general, a VMM can provide secure isolation and a VM accesses hard-ware resources through the control of the VMM, so the VMM is the base of the security of a virtual system. Normally, one VM is taken as a management VM to have some privileges such as creating, suspending, resuming, or deleting a VM.

Once a hacker successfully enters the VMM or management VM, the whole system is in danger. A subtler problem arises in protocols that rely on the “freshness” of their random number source for generating session keys. Considering a VM, rolling back to a point after a random number has been chosen, but before it has been used, resumes execution; the random number, which must be “fresh” for security purposes, is reused. With a stream cipher, two different plaintexts could be encrypted under the same key stream, which could, in turn, expose both plaintexts if the plaintexts have suffi-cient redundancy. Noncryptographic protocols that rely on freshness are also at risk. For example, the reuse of TCP initial sequence numbers can raise TCP hijacking attacks.

Intrusions are unauthorized access to a certain computer from local or network users and intrusion detection is used to recognize the unauthorized access. An intrusion detection system (IDS) is built on operating systems, and is based on the characteristics of intrusion actions. A typical IDS can be classified as a host-based IDS (HIDS) or a network-based IDS (NIDS), depending on the data source. A HIDS can be implemented on the monitored system. When the monitored system is attacked by hackers, the HIDS also faces the risk of being attacked. A NIDS is based on the flow of network traffic which can’t detect fake actions.

Virtualization-based intrusion detection can isolate guest VMs on the same hardware platform. Even some VMs can be invaded successfully; they never influence other VMs, which is similar to the way in which a NIDS operates. Furthermore, a VMM monitors and audits access requests for hardware and system software. This can avoid fake actions and possess the merit of a HIDS. There are two different methods for implementing a VM-based IDS: Either the IDS is an independent process in each VM or a high-privileged VM on the VMM; or the IDS is integrated into the VMM 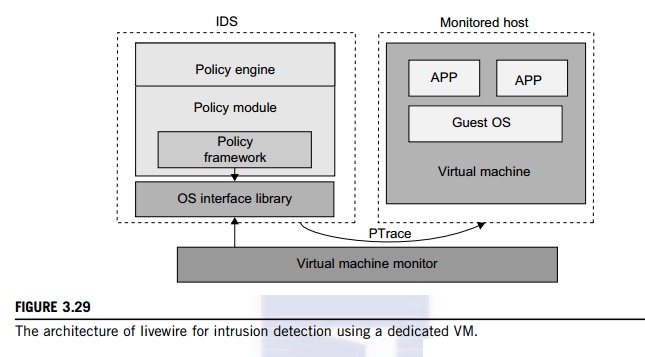 and has the same privilege to access the hardware as well as the VMM. Garfinkel and Rosenblum [17] have proposed an IDS to run on a VMM as a high-privileged VM. Figure 3.29 illustrates the concept.

The VM-based IDS contains a policy engine and a policy module. The policy framework can monitor events in different guest VMs by operating system interface library and PTrace indicates trace to secure policy of monitored host. It’s difficult to predict and prevent all intrusions without delay. Therefore, an analysis of the intrusion action is extremely important after an intrusion occurs. At the time of this writing, most computer systems use logs to analyze attack actions, but it is hard to ensure the credibility and integrity of a log. The IDS log service is based on the operating system ker-nel. Thus, when an operating system is invaded by attackers, the log service should be unaffected.

Besides IDS, honeypots and honeynets are also prevalent in intrusion detection. They attract and provide a fake system view to attackers in order to protect the real system. In addition, the attack action can be analyzed, and a secure IDS can be built. A honeypot is a purposely defective system that simulates an operating system to cheat and monitor the actions of an attacker. A honeypot can be divided into physical and virtual forms. A guest operating system and the applications running on it constitute a VM. The host operating system and VMM must be guaranteed to prevent attacks from the VM in a virtual honeypot.

EMC and VMware have joined forces in building security middleware for trust management in distribu-ted systems and private clouds. The concept of trusted zones was established as part of the virtual infrastructure. Figure 3.30 illustrates the concept of creating trusted zones for virtual clusters (multiple 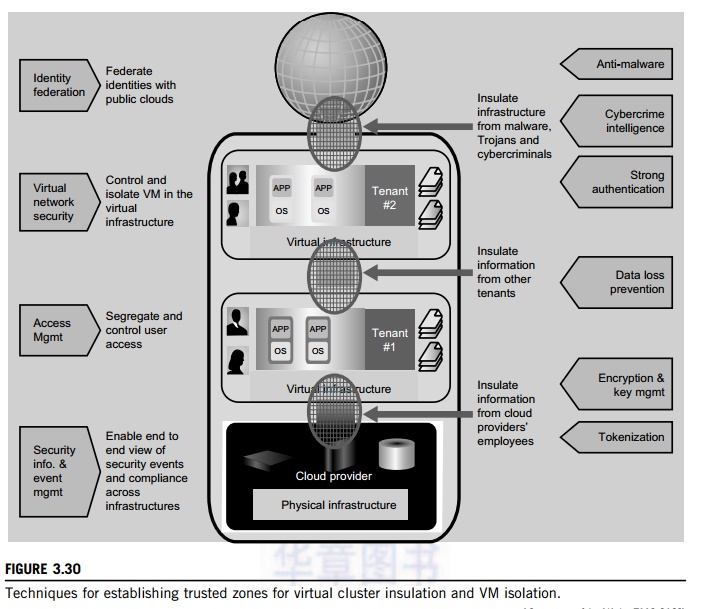 applications and OSes for each tenant) provisioned in separate virtual environments. The physical infrastructure is shown at the bottom, and marked as a cloud provider. The virtual clusters or infrastruc-tures are shown in the upper boxes for two tenants. The public cloud is associated with the global user communities at the top.

The arrowed boxes on the left and the brief description between the arrows and the zoning boxes are security functions and actions taken at the four levels from the users to the providers. The small circles between the four boxes refer to interactions between users and providers and among the users themselves. The arrowed boxes on the right are those functions and actions applied between the tenant environments, the provider, and the global communities.

Almost all available countermeasures, such as anti-virus, worm containment, intrusion detection, encryption and decryption mechanisms, are applied here to insulate the trusted zones and isolate the VMs for private tenants. The main innovation here is to establish the trust zones among the virtual clusters.

The end result is to enable an end-to-end view of security events and compliance across the virtual clusters dedicated to different tenants. We will discuss security and trust issues in Chapter 7 when we study clouds in more detail.