Virtualization Support at the OS Level

Virtualization Support at the OS Level

With the help of VM technology, a new computing mode known as cloud computing is emerging. Cloud computing is transforming the computing landscape by shifting the hardware and staffing costs of managing a computational center to third parties, just like banks. However, cloud computing has at least two challenges. The first is the ability to use a variable number of physical machines and VM instances depending on the needs of a problem. For example, a task may need only a single CPU dur-ing some phases of execution but may need hundreds of CPUs at other times. The second challenge concerns the slow operation of instantiating new VMs. Currently, new VMs originate either as fresh boots or as replicates of a template VM, unaware of the current application state. Therefore, to better support cloud computing, a large amount of research and development should be done.

Compared to hardware-level virtualization, the benefits of OS extensions are twofold: (1) VMs at the operating system level have minimal startup/shutdown costs, low resource requirements, and high scalability; and (2) for an OS-level VM, it is possible for a VM and its host environment to synchro-nize state changes when necessary. These benefits can be achieved via two mechanisms of OS-level virtualization: (1) All OS-level VMs on the same physical machine share a single operating system kernel; and (2) the virtualization layer can be designed in a way that allows processes in VMs to access as many resources of the host machine as possible, but never to modify them. In cloud 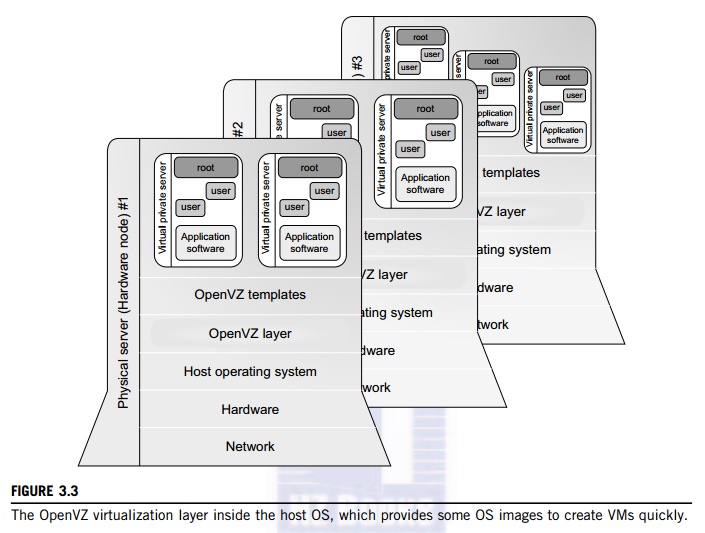 computing, the first and second benefits can be used to overcome the defects of slow initialization of VMs at the hardware level, and being unaware of the current application state, respectively.

Figure 3.3 illustrates the concept of OS-level virtualization. The virtualization layer is inserted inside the OS to partition the hardware resources for multiple VMs to run their applications in multiple virtual environments. To implement OS-level virtualization, isolated execution environ-ments (VMs) should be created based on a single OS kernel. Furthermore, the access requests from a VM need to be redirected to the VM’s local resource partition on the physical machine. For example, the chroot command in a UNIX system can create several virtual root directories within a host OS. These virtual root directories are the root directories of all VMs created.

4. Virtualization on Linux or Windows Platforms

By far, most reported OS-level virtualization systems are Linux-based. Virtualization support on the Windows-based platform is still in the research stage. The Linux kernel offers an abstraction layer to allow software processes to work with and operate on resources without knowing the hardware details. New hardware may need a new Linux kernel to support. Therefore, different Linux plat-forms use patched kernels to provide special support for extended functionality.

However, most Linux platforms are not tied to a special kernel. In such a case, a host can run several VMs simultaneously on the same hardware. Table 3.3 summarizes several examples of OS-level virtualization tools that have been developed in recent years. Two OS tools (Linux vServer and OpenVZ) support Linux platforms to run other platform-based applications through virtualiza-tion. These two OS-level tools are illustrated in Example 3.1. The third tool, FVM, is an attempt specifically developed for virtualization on the Windows NT platform.

OpenVZ is an OS-level tool designed to support Linux platforms to create virtual environments for running VMs under different guest OSes. OpenVZ is an open source container-based virtualization solution built on Linux. To support virtualization and isolation of various subsystems, limited resource management, and checkpointing, OpenVZ modifies the Linux kernel. The overall picture of the OpenVZ system is illustrated in Figure 3.3. Several VPSes can run simultaneously on a physical machine. These VPSes look like normal

Linux servers. Each VPS has its own files, users and groups, process tree, virtual network, virtual devices, and IPC through semaphores and messages.

The resource management subsystem of OpenVZ consists of three components: two-level disk alloca-tion, a two-level CPU scheduler, and a resource controller. The amount of disk space a VM can use is set by the OpenVZ server administrator. This is the first level of disk allocation. Each VM acts as a standard Linux system. Hence, the VM administrator is responsible for allocating disk space for each user and group. This is the second-level disk quota. The first-level CPU scheduler of OpenVZ decides which VM to give the time slice to, taking into account the virtual CPU priority and limit settings.

The second-level CPU scheduler is the same as that of Linux. OpenVZ has a set of about 20 parameters which are carefully chosen to cover all aspects of VM operation. Therefore, the resources that a VM can use are well controlled. OpenVZ also supports checkpointing and live migration. The complete state of a VM can quickly be saved to a disk file. This file can then be transferred to another physical machine and the VM can be restored there. It only takes a few seconds to complete the whole process. However, there is still a delay in processing because the established network connections are also migrated.