In a cluster built with mixed nodes of host and guest systems, the normal method of operation is to run everything on the physical machine.

In a cluster built with mixed nodes of host and guest systems, the normal method of operation is to run everything on the physical machine. When a VM fails, its role could be replaced by another VM on a different node, as long as they both run with the same guest OS. In other words, a physical node can fail over to a VM on another host. This is different from physical-to-physical failover in a tradi-tional physical cluster. The advantage is enhanced failover flexibility. The potential drawback is that a VM must stop playing its role if its residing host node fails. However, this problem can be mitigated with VM life migration. Figure 3.20 shows the process of life migration of a VM from host A to host B. The migration copies the VM state file from the storage area to the host machine.

There are four ways to manage a virtual cluster. First, you can use a guest-based manager, by which the cluster manager resides on a guest system. In this case, multiple VMs form a virtual cluster. For example, openMosix is an open source Linux cluster running different guest systems on top of the Xen hypervisor. Another example is Sun’s cluster Oasis, an experimental Solaris cluster of VMs supported by a VMware VMM. Second, you can build a cluster manager on the host systems. The host-based manager supervises the guest systems and can restart the guest system on another physical machine. A good example is the VMware HA system that can restart a guest system after failure.

These two cluster management systems are either guest-only or host-only, but they do not mix. A third way to manage a virtual cluster is to use an independent cluster manager on both the host and guest systems. This will make infrastructure management more complex, however. Finally, you can use an integrated cluster on the guest and host systems. This means the manager must be designed to distinguish between virtualized resources and physical resources. Various cluster management schemes can be greatly enhanced when VM life migration is enabled with minimal overhead.

VMs can be live-migrated from one physical machine to another; in case of failure, one VM can be replaced by another VM. Virtual clusters can be applied in computational grids, cloud platforms, and high-performance computing (HPC) systems. The major attraction of this scenario is that virtual cluster-ing provides dynamic resources that can be quickly put together upon user demand or after a node failure. In particular, virtual clustering plays a key role in cloud computing. When a VM runs a live ser-vice, it is necessary to make a trade-off to ensure that the migration occurs in a manner that minimizes all three metrics. The motivation is to design a live VM migration scheme with negligible downtime, the lowest network bandwidth consumption possible, and a reasonable total migration time.

Furthermore, we should ensure that the migration will not disrupt other active services residing in the same host through resource contention (e.g., CPU, network bandwidth). A VM can be in one of the following four states. An inactive state is defined by the virtualization platform, under which 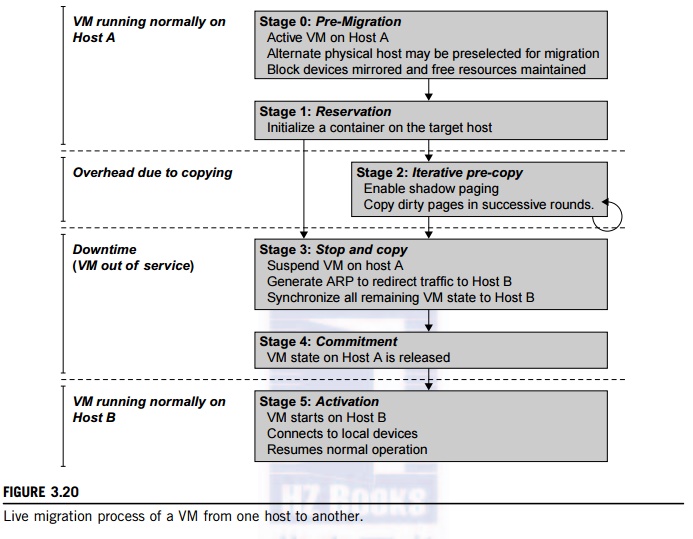 the VM is not enabled. An active state refers to a VM that has been instantiated at the virtualization platform to perform a real task. A paused state corresponds to a VM that has been instantiated but disabled to process a task or paused in a waiting state. A VM enters the suspended state if its machine file and virtual resources are stored back to the disk. As shown in Figure 3.20, live migration of a VM consists of the following six steps:

Steps 0 and 1: Start migration. This step makes preparations for the migration, including determining the migrating VM and the destination host. Although users could manually make a VM migrate to an appointed host, in most circumstances, the migration is automatically started by strategies such as load balancing and server consolidation.

Steps 2: Transfer memory. Since the whole execution state of the VM is stored in memory, sending the VM’s memory to the destination node ensures continuity of the service provided by the VM. All of the memory data is transferred in the first round, and then the migration controller recopies the memory data which is changed in the last round. These steps keep iterating until the dirty portion of the memory is small enough to handle the final copy. Although precopying memory is performed iteratively, the execution of programs is not obviously interrupted.

Step 3: Suspend the VM and copy the last portion of the data. The migrating VM’s execution is suspended when the last round’s memory data is transferred. Other nonmemory data such as CPU and network states should be sent as well. During this step, the VM is stopped and its applications will no longer run. This “service unavailable” time is called the “downtime” of migration, which should be as short as possible so that it can be negligible to users.

Steps 4 and 5: Commit and activate the new host. After all the needed data is copied, on the destination host, the VM reloads the states and recovers the execution of programs in it, and the service provided by this VM continues. Then the network connection is redirected to the new VM and the dependency to the source host is cleared. The whole migration process finishes by removing the original VM from the source host.

Figure 3.21 shows the effect on the data transmission rate (Mbit/second) of live migration of a VM from one host to another. Before copying the VM with 512 KB files for 100 clients, the data throughput was 870 MB/second. The first precopy takes 63 seconds, during which the rate is reduced to 765 MB/second. Then the data rate reduces to 694 MB/second in 9.8 seconds for more iterations of the copying process. The system experiences only 165 ms of downtime, before the VM is restored at the destination host. This experimental result shows a very small migration overhead in live transfer of a VM between host nodes. This is critical to achieve dynamic cluster reconfiguration and disaster recovery as needed in cloud computing. We will study these techniques in more detail in Chapter 4.

With the emergence of widespread cluster computing more than a decade ago, many cluster con-figuration and management systems have been developed to achieve a range of goals. These goals naturally influence individual approaches to cluster management. VM technology has become a popular method for simplifying management and sharing of physical computing resources. Platforms 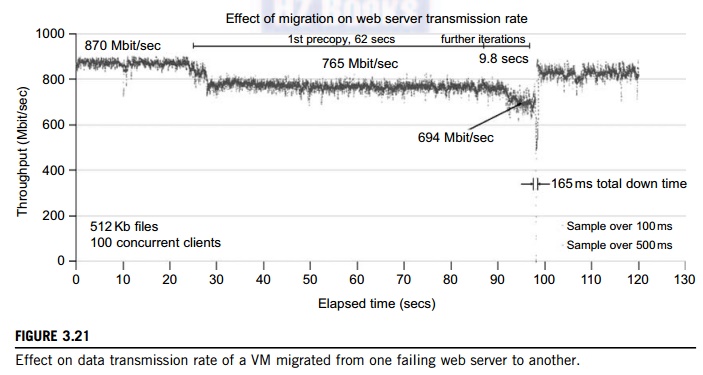 such as VMware and Xen allow multiple VMs with different operating systems and configurations to coexist on the same physical host in mutual isolation. Clustering inexpensive computers is an effective way to obtain reliable, scalable computing power for network services and compute-intensive applications