In virtualization environments, a virtualization layer is inserted between the hardware and traditional operating systems or a traditional operating system is modified to support virtualization. This procedure complicates storage operations. On the one hand, storage management of the guest OS per-forms as though it is operating in a real hard disk while the guest OSes cannot access the hard disk directly. On the other hand, many guest OSes contest the hard disk when many VMs are running on a single physical machine. Therefore, storage management of the underlying VMM is much more complex than that of guest OSes (traditional OSes).

In addition, the storage primitives used by VMs are not nimble. Hence, operations such as remap-ping volumes across hosts and checkpointing disks are frequently clumsy and esoteric, and sometimes simply unavailable. In data centers, there are often thousands of VMs, which cause the VM images to become flooded. Many researchers tried to solve these problems in virtual storage management. The main purposes of their research are to make management easy while enhancing performance and reducing the amount of storage occupied by the VM images. Parallax is a distributed storage system customized for virtualization environments. Content Addressable Storage (CAS) is a solution to reduce the total size of VM images, and therefore supports a large set of VM-based systems in data centers.

Since traditional storage management techniques do not consider the features of storage in virtualization environments, Parallax designs a novel architecture in which storage features that have traditionally been implemented directly on high-end storage arrays and switchers are relocated into a federation of storage VMs. These storage VMs share the same physical hosts as the VMs that they serve. Figure 3.26 provides an overview of the Parallax system architecture. It supports all popular system virtualization techniques, such as paravirtualization and full virtualization. For each physical machine, Parallax customizes a special storage appliance VM. The storage appliance VM acts as a block virtualization layer between individual VMs and the physical storage device. It provides a virtual disk for each VM on the same physical machine.

The architecture of Parallax is scalable and especially suitable for use in cluster-based environments. Figure 3.26 shows a high-level view of the structure of a Parallax-based cluster. A cluster-wide administrative domain manages all storage appliance VMs, which makes storage management easy. The storage appliance 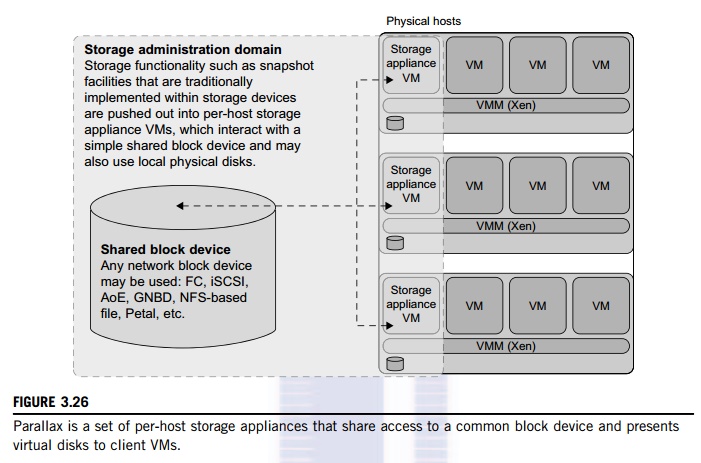 VM also allows functionality that is currently implemented within data-center hardware to be pushed out and implemented on individual hosts. This mechanism enables advanced storage features such as snapshot facilities to be implemented in software and delivered above commodity network storage targets.

Parallax itself runs as a user-level application in the storage appliance VM. It provides virtual disk images (VDIs) to VMs. A VDI is a single-writer virtual disk which may be accessed in a location-transparent manner from any of the physical hosts in the Parallax cluster. The VDIs are the core abstraction provided by Parallax. Parallax uses Xen’s block tap driver to handle block requests and it is implemented as a tapdisk library. This library acts as a single block virtualization service for all client VMs on the same physical host. In the Parallax system, it is the storage appliance VM that connects the physical hardware device for block and network access. As shown in Figure 3.30, physical device drivers are included in the storage appliance VM. This imple-mentation enables a storage administrator to live-upgrade the block device drivers in an active cluster.