Virtual clusters are built with VMs installed at distributed servers from one or more physical clusters.

The provisioning of VMs to a virtual cluster is done dynamically to have the following interest-ing properties:

•    The virtual cluster nodes can be either physical or virtual machines. Multiple VMs running with different OSes can be deployed on the same physical node.

•    A VM runs with a guest OS, which is often different from the host OS, that manages the resources in the physical machine, where the VM is implemented.

•    The purpose of using VMs is to consolidate multiple functionalities on the same server. This will greatly enhance server utilization and application flexibility. 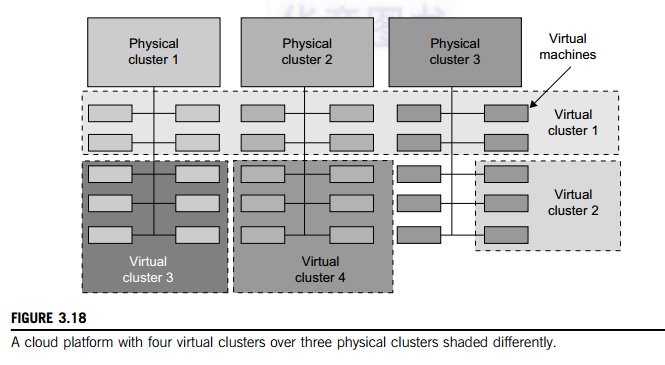 •    VMs can be colonized (replicated) in multiple servers for the purpose of promoting distributed parallelism, fault tolerance, and disaster recovery.

•    The size (number of nodes) of a virtual cluster can grow or shrink dynamically, similar to the way an overlay network varies in size in a peer-to-peer (P2P) network.

•    The failure of any physical nodes may disable some VMs installed on the failing nodes. But the failure of VMs will not pull down the host system.

Since system virtualization has been widely used, it is necessary to effectively manage VMs running on a mass of physical computing nodes (also called virtual clusters) and consequently build a high-performance virtualized computing environment. This involves virtual cluster deployment, monitoring and management over large-scale clusters, as well as resource scheduling, load balancing, server consolidation, fault tolerance, and other techniques. The different node colors in Figure 3.18 refer to different virtual clusters. In a virtual cluster system, it is quite important to store the large number of VM images efficiently.

Figure 3.19 shows the concept of a virtual cluster based on application partitioning or customi-zation. The different colors in the figure represent the nodes in different virtual clusters. As a large number of VM images might be present, the most important thing is to determine how to store those images in the system efficiently. There are common installations for most users or applica-tions, such as operating systems or user-level programming libraries. These software packages can be preinstalled as templates (called template VMs). With these templates, users can build their own software stacks. New OS instances can be copied from the template VM. User-specific components such as programming libraries and applications can be installed to those instances. 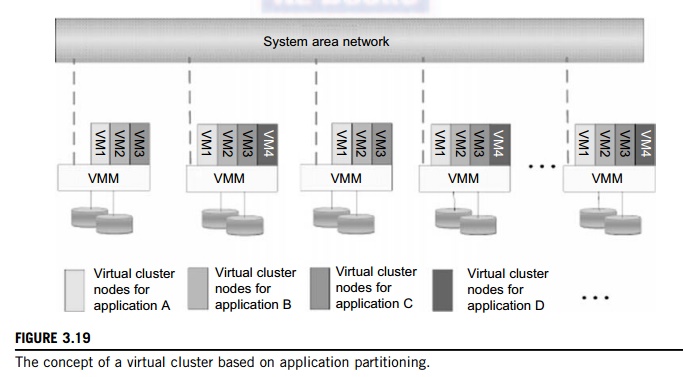 systems. Each VM can be installed on a remote server or replicated on multiple servers belonging to the same or different physical clusters. The boundary of a virtual cluster can change as VM nodes are added, removed, or migrated dynamically over time.

The system should have the capability of fast deployment. Here, deployment means two things: to construct and distribute software stacks (OS, libraries, applications) to a physical node inside clus-ters as fast as possible, and to quickly switch runtime environments from one user’s virtual cluster to another user’s virtual cluster. If one user finishes using his system, the corresponding virtual cluster should shut down or suspend quickly to save the resources to run other VMs for other users.

The concept of “green computing” has attracted much attention recently. However, previous approaches have focused on saving the energy cost of components in a single workstation without a global vision. Consequently, they do not necessarily reduce the power consumption of the whole clus-ter. Other cluster-wide energy-efficient techniques can only be applied to homogeneous workstations and specific applications. The live migration of VMs allows workloads of one node to transfer to another node. However, it does not guarantee that VMs can randomly migrate among themselves. In fact, the potential overhead caused by live migrations of VMs cannot be ignored.

The overhead may have serious negative effects on cluster utilization, throughput, and QoS issues. Therefore, the challenge is to determine how to design migration strategies to implement green computing without influencing the performance of clusters. Another advantage of virtualiza-tion is load balancing of applications in a virtual cluster. Load balancing can be achieved using the load index and frequency of user logins. The automatic scale-up and scale-down mechanism of a virtual cluster can be implemented based on this model. Consequently, we can increase the resource utilization of nodes and shorten the response time of systems. Mapping VMs onto the most appro-priate physical node should promote performance. Dynamically adjusting loads among nodes by live migration of VMs is desired, when the loads on cluster nodes become quite unbalanced.

The template VM can be distributed to several physical hosts in the cluster to customize the VMs. In addition, existing software packages reduce the time for customization as well as switching virtual environments. It is important to efficiently manage the disk spaces occupied by template software packages. Some storage architecture design can be applied to reduce duplicated blocks in a distributed file system of virtual clusters. Hash values are used to compare the contents of data blocks. Users have their own profiles which store the identification of the data blocks for corresponding VMs in a user-specific virtual cluster. New blocks are created when users modify the corresponding data. Newly created blocks are identified in the users’ profiles.

Basically, there are four steps to deploy a group of VMs onto a target cluster: preparing the disk image, configuring the VMs, choosing the destination nodes, and executing the VM deployment command on every host. Many systems use templates to simplify the disk image preparation process. A template is a disk image that includes a preinstalled operating system with or without certain application software. Users choose a proper template according to their requirements and make a duplicate of it as their own disk image. Templates could implement the COW (Copy on Write) format. A new COW backup file is very small and easy to create and transfer. Therefore, it definitely reduces disk space consumption. In addition, VM deployment time is much shorter than that of copying the whole raw image file.

Every VM is configured with a name, disk image, network setting, and allocated CPU and memory. One needs to record each VM configuration into a file. However, this method is inefficient when managing a large group of VMs. VMs with the same configurations could use preedited profiles to simplify the process. In this scenario, the system configures the VMs according to the chosen pro-file. Most configuration items use the same settings, while some of them, such as UUID, VM name, and IP address, are assigned with automatically calculated values. Normally, users do not care which host is running their VM. A strategy to choose the proper destination host for any VM is needed. The deployment principle is to fulfill the VM requirement and to balance workloads among the whole host network.