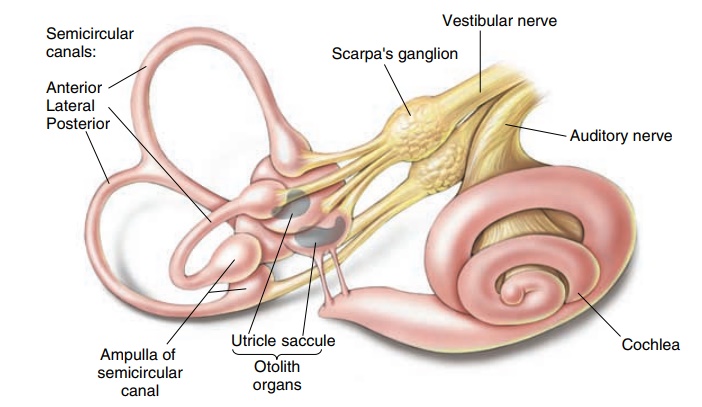 This paired organ is part of the inner ear (see Figure 5.48) and sensations produced here are conveyed to the brain along with that of hearing via the vestibulo-cochlear nerve.

This paired organ is part of the inner ear (see Figure 5.48) and sensations produced here are conveyed to the brain along with that of hearing via the vestibulo-cochlear nerve. Because it is directly related to equi-librium and balance, it is discussed in this section. 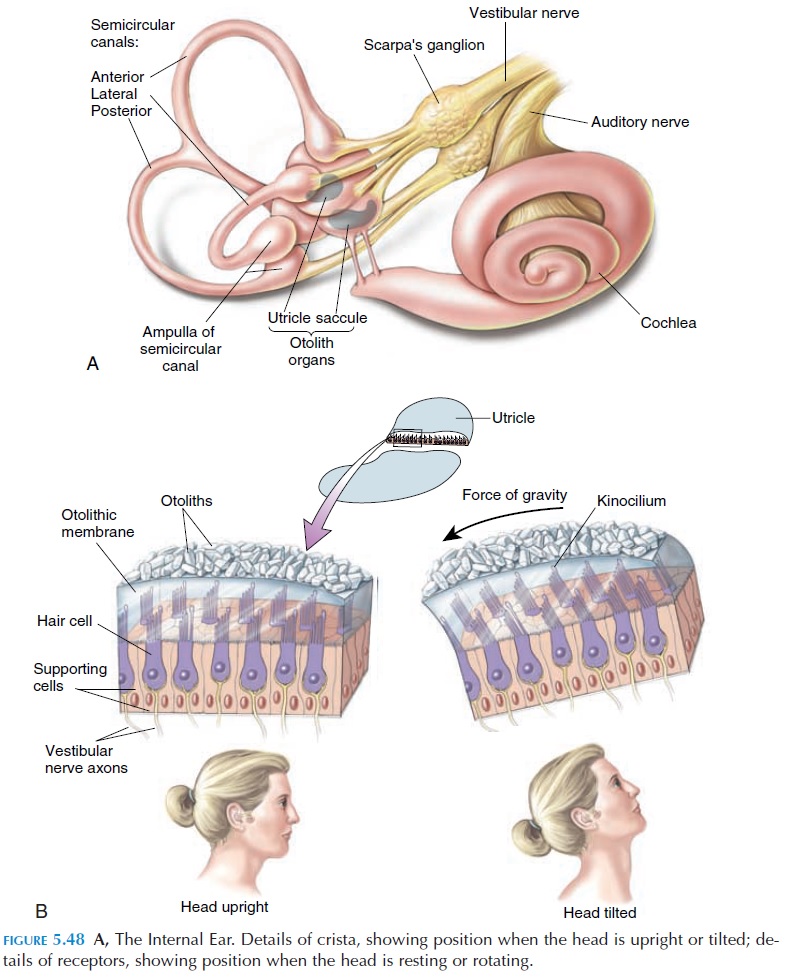 The vestibular apparatus, on each side, consists of three circular canals. Each canal lies perpendicular to each other and is enclosed in a bony labyrinth. To visualize this, place a half-open book, vertically on a table. Then each canal would lie along the two halves of the book, with one canal flat on the table. The canals are interconnected and filled with fluid. At the point where they meet, the canal is expanded to form the ampulla, which, in turn, is connected to fluid-filled structures called utricle and saccule. The am-pulla of the canals, the utricle and saccule have re-ceptors that respond to movement. 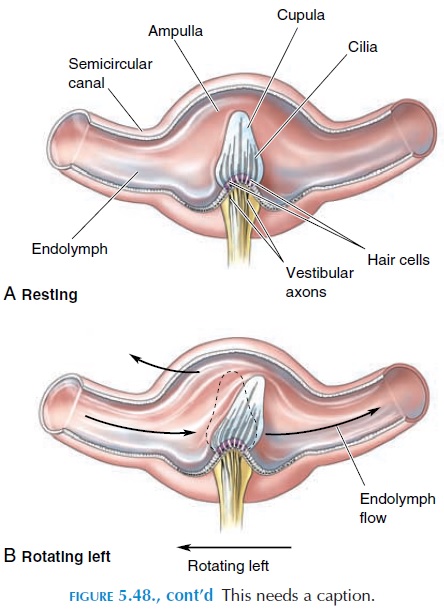 The receptors in the utricle and saccule are found in a small, thickened area called the macula. The receptors are in the form of hair cells with cilia, surrounded by a glycoprotein membrane, the otolithic mem-brane. Calcium carbonate crystals, known as otoliths, are found on top of the membrane. When the head is tilted, the otoliths move as a result of gravity and pull on the hair cells, resulting in changes in membrane potential and impulse formation. The receptors in the utricle and saccule respond when the head moves for-ward or backward—linear acceleration.

The receptors in the canals respond maximally when the head is rotated—rotational acceleration. These receptors are located in small, elevated regions in the ampulla known as crista. Here, too, the recep-tors are in the form of hair cells, but they are covered by a gelatinous mass known as the cupula. Every time the head is moved, the fluid in the semicircular canals is set in motion. Depending on which side of the head is turned, fluid in specific semicircular canals of the two sides move, causing the cupula to move in turn and generate impulses in the receptors.

The impulses travel to the brainstem where some descend as the vestibulospinal tract that affects lower motor neurons. Certain impulses enter the cerebel-lum to give information about head movement. Cer-tain neurons take information to the cranial nerves that supply the eye to help the eye adjust to the move-ment; others take information to the motor cortex. In this way, the body is able to increase and decrease tone and maintain balance and equilibrium.

Because fluid has inertia, it continues to move even after stopping a rotational movement. This is the reason why individuals continue to feel giddy when they stop after turning rapidly. If the eyes were watched closely, rapid movements would be observed after stopping the movement (i.e., the eye movement persists for as long as the fluid continues to move in the canal).

The vestibular apparatus is important for orienta-tion in space. Orientation of the body is aided by vi-sual input, input from proprioceptors, and from touch and pressure receptors.