Anatomic Structure of the Spinal Cord 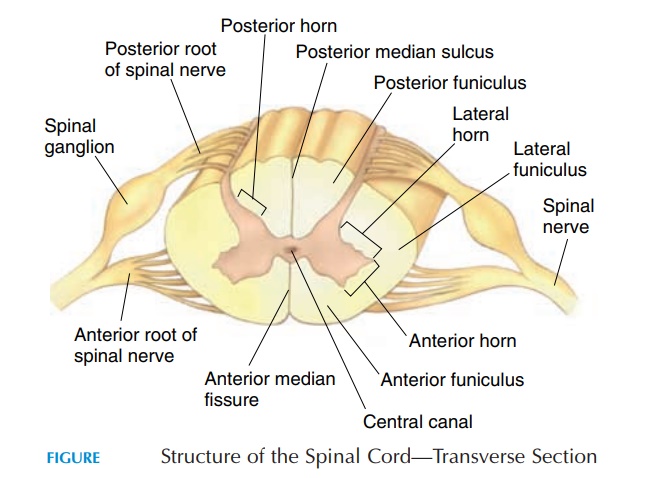 ANATOMIC STRUCTURE OF THE SPINAL CORD

The spinal cord has 31 pairs of spinal nerves leaving through the intervertebral foramen located between the vertebrae. Some nerves are large because they sup-ply a larger area of the body. Large nerves are seen in the lower neck region, supplying the arms, forearms, and hands. Such nerves are also seen in the lumbar and sacral regions, supplying the thighs, legs, and feet. The cord is enlarged slightly in the cervical (cervical en-largement) and lumbosacral (lumbosacral enlarge-ment) regions, as it has to accommodate the cell bod-ies of a greater number of neurons. The lower end of the spinal cord becomes conical and tapers into the conus medullaris region. A thin, fibrous tissue ex-tends from its tip to the sacral region, the filum termi-nale. This fibrous tissue gives longitudinal support tothe spinal cord.

A segment is the part of the spinal cord that cor-responds to a single pair of spinal nerves. Therefore, there are 31 segments in the spinal cord: 8 cervical, 12 thoracic, 5 lumbar, 5 sacral, and 1 coccygeal.

Protection of the Spinal Cord 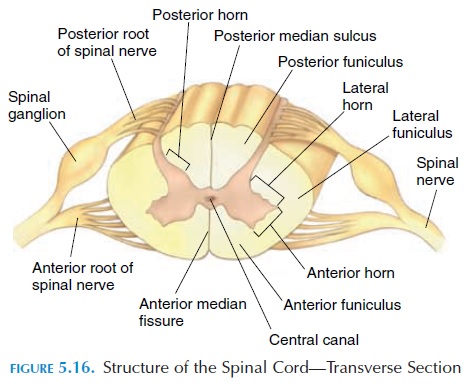 The dura mater is a tough fibrous sheath that is the outer covering of the spinal cord. Its collagen fibers are oriented longitudinally. At the foramen magnum, it fuses with the periosteum of the occipi-tal bone. Distally, it forms a cord that surrounds the filum terminale to form the coccygeal ligament. This way, it provides longitudinal stability to the spinal cord. Laterally, the dura fuses with the con-nective tissue surrounding the spinal nerves as they exit through the intervertebral foramen. The space between the dura and the vertebral canal is the epidural space, containing loose connective tissue,adipose tissue, and blood vessels.

The arachnoid mater is the membrane lying deep to the dura. A potential space—the subdural space— separates it from the dura. The arachnoid is lined by squamous epithelium. From its inner surface, deli-cate, loose collagen and elastic fibers extend between the epithelium and the inner layer pia. This space, the subarachnoid space, is filled with cerebrospinal fluid (CSF). The CSF, discussed, serves asa shock absorber and a medium that transports dis-solved gases, nutrients, chemical messengers, and waste products.

The pia mater is firmly bound to the spinal cord. Collagen and elastic tissue from this layer extend lat-erally from either side of the spinal cord as the den-ticulate ligament. This ligament, after piercing thearachnoid, becomes attached to the dura, giving the spinal cord lateral stability.

Sectional Anatomy of the Spinal Cord

If a transverse section is made of the spinal cord (see Figure 5.16) and viewed, two areas are noted. Around the center, there is a gray area—the gray mater. Sur-rounding it is a white area known as the white mater. The cell bodies of neurons and short nervefibers are located in the gray mater. The white mater contains neuroglia and fiber tracts. The gray mater appears as if it has many horns. Depending on the lo-cation, the horns are called the posterior or dorsalgray horns, anterior or ventral gray horns,and lat-eral gray horns. The cell bodies of nerves supplyingskeletal muscles (motor neurons) are located in the ventral horn. The lateral horn contains cell bodies of the autonomic nerves, and the dorsal horn has cell bodies of nerves that receive impulses from the spinal nerves. At the center of the gray mater is the centralcanal through which cerebrospinal fluid flows.

Functions of the Gray Materof the Spinal Cord

The gray mater of the spinal cord has two functions. First, synapses relay signals between the periphery and the brain in both directions. It is in the dorsal horns that sensory signals are relayed from the sen-sory roots of the spinal nerves to other parts of the CNS. It is mainly in the ventral and lateral horns that motor signals are relayed from the neurons descend-ing from the brain to the motor nerves and auto-nomic nerves.

Second, the gray mater of the cord integrates some motor activities. For example, if you touch a hot ob-ject with your hand, the hand is withdrawn within a few seconds. This reflex occurs even without the sig-nals reaching the brain.

Other similar reflexes that occur at the level of the cord are contraction of the extensors when standing, stretch reflexes that cause the muscle to contract when stretched and, in lower animals, the scratch reflex.

Function of the White Mater

The white mater surrounding the gray mater is white because of the myelinated fibers. It contains bundles of axons that carry impulses across spinal segments, as well as to and from the brain. The horns of the gray mater divide the white mater into three distinct columns. The two dorsal, or poste-rior white columns, lie between the dorsal grayhorns. The two lateral white columns lie on each side of the cord lateral to the gray mater. Two ven-tral, or anterior white columns, lie anterior to theventral gray horns. Axons from neurons having the same function, conduction speed, diameter, and myelination are bundled together as tracts in these columns. Tracts carrying sensory information to the brain are the ascending tracts, and those from the brain are the descending tracts, conveying com-mands from the brain to the spinal cord. 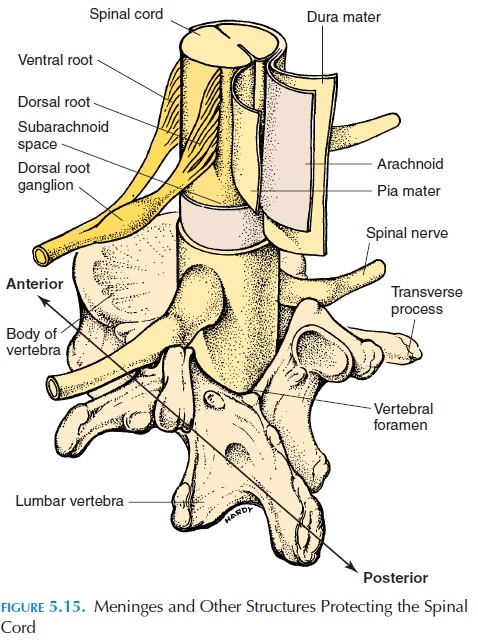