For the proper functioning of all the cells in the body, the internal environment must be maintained within a narrow range: The temperature of the body, pH, oxygen levels, volume of blood, blood pressure, in-take of food, digestion and absorption of food and water, and excretion of waste products must be monitored and regulated.

For the proper functioning of all the cells in the body, the internal environment must be maintained within a narrow range: The temperature of the body, pH, oxygen levels, volume of blood, blood pressure, in-take of food, digestion and absorption of food and water, and excretion of waste products must be monitored and regulated. All these levels are largely main-tained without us being conscious of it. The auto-nomic nervous system (ANS) is responsible for thisactivity by coordinating the functions of almost all systems of the body.

The autonomic nerves are slightly different in structure than the somatic nerves. The somatic mo-tor nerves reach the effector—the skeletal muscle di-rectly form the central nervous system—nerves be-longing to the ANS always synapse and communicate with another neuron that lies outside the CNS before they reach the effectors (see Figure 5.50). 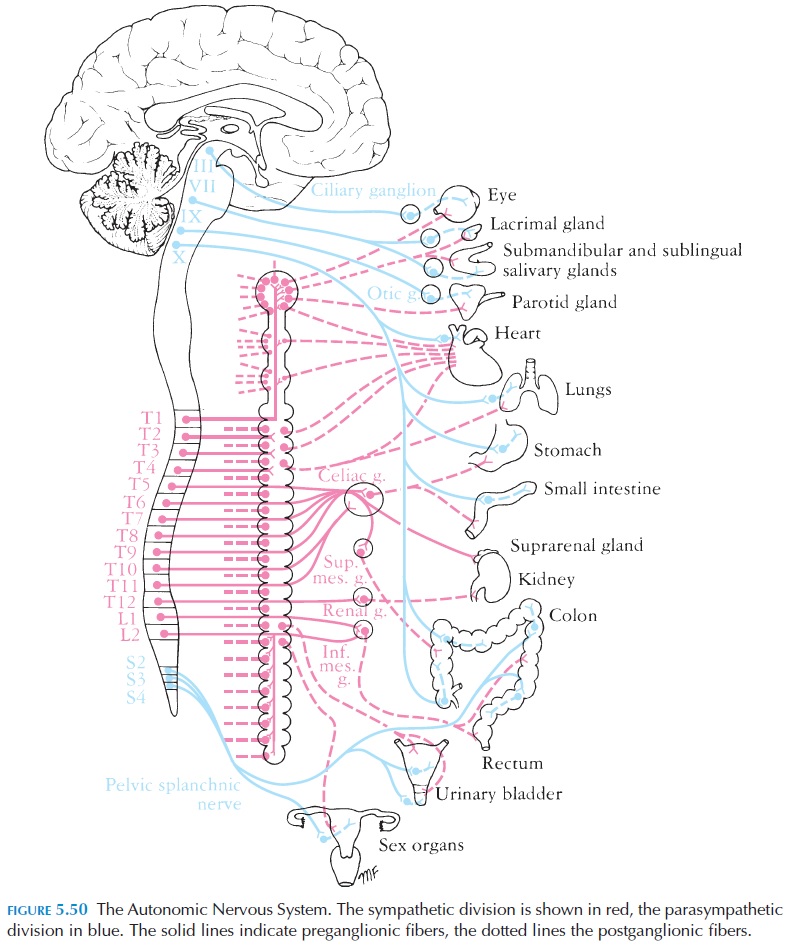 However, this is not always true; sometimes the two divisions may work in-dependently, with the structure innervated by one di-vision or the other. At other times, both divisions may have the same type of effect, with each division con-trolling one part of the complex process.

The preganglionic fibers of the parasympathetic divi-sion arise from the cranial and sacral parts of the ner-vous system, and this division is, therefore, referred to as thecraniosacral outflow (Figure 5.50). The parasympathetic division to the head (cranial compo-nent) reaches the target organs via the oculomotor (III), facial (VII), and glossopharyngeal (IX) cranial nerves. The supply to the thorax and upper abdomen reaches the target organs via the vagus (V) cranial nerves. Nerves from the sacral region supply the pelvic viscera via the pelvic branches of sacral spinal nerves S2–S4. The preganglionic fibers from the cranial and sacral region synapse with short, postganglionic fibers located close to or in the target organs that they supply. 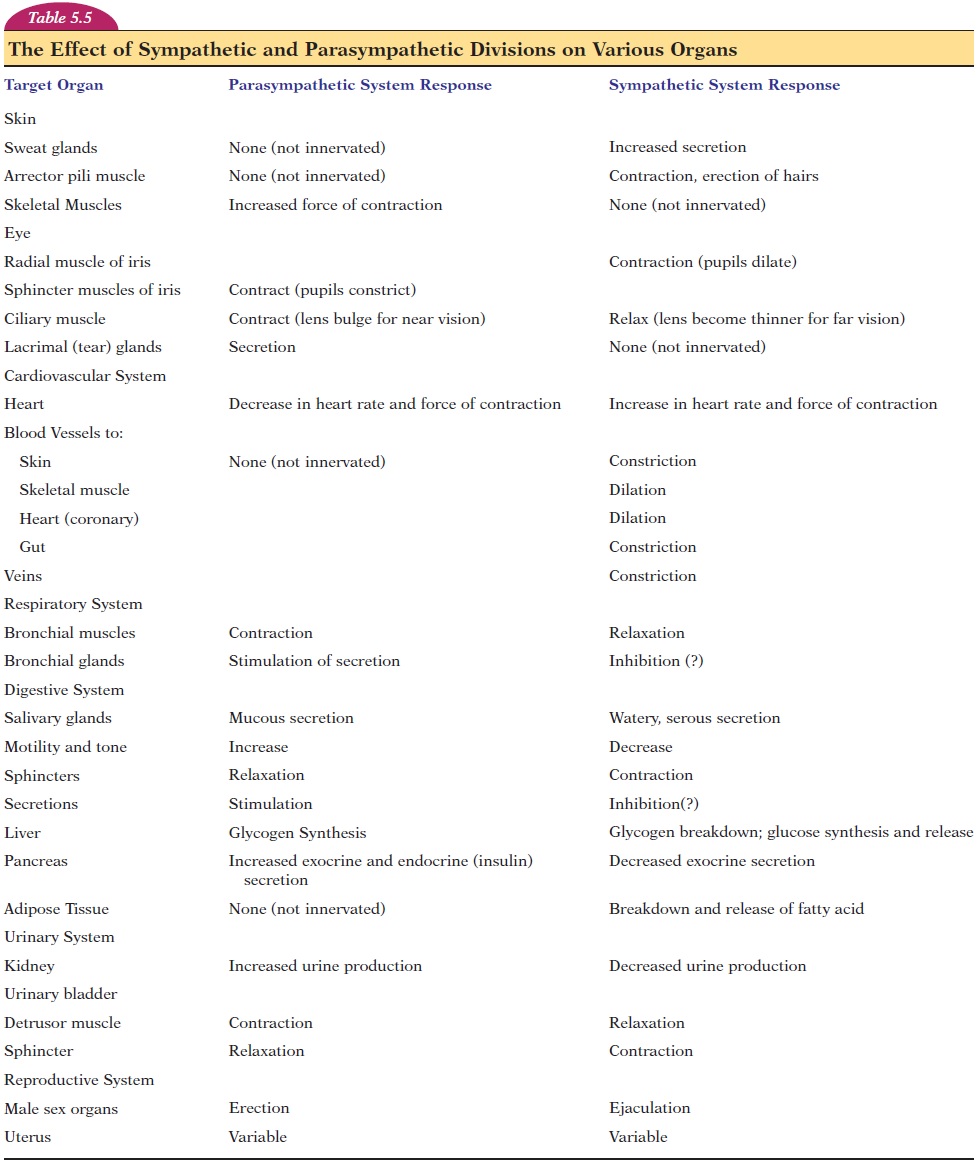 Receptors of the Sympathetic System

At the same time, beta-1 receptors present in the skeletal muscles are stimulated to increase the metabolic activity. In the heart, the beta-1 receptors increase the rate and force of contraction. Beta-2 receptors present in the smooth muscle of the bronchi have an inhibitory ef-fect. When they are stimulated by norepinephrine re-leased by the postganglionic sympathetic cells, the bronchi relax and increase their caliber, allowing more air to enter the lungs. In this way, the same neu-rotransmitter norepinephrine is able to produce var-ied effects in different organs, based on the type of re-ceptor the organ possesses.

When the neurotransmitter is released by the nerve ending, it is quickly destroyed by the enzymes present in the vicinity. Thus, their effects last for a short time. However, the epinephrine and norepi-nephrine released by the adrenal medulla are not re-moved as fast, as the blood and most tissue have rel-atively low concentration of the enzymes.

THE SYMPATHETIC SYSTEM AND THE ADRENAL MEDULLA

GENERAL PATTERN OF RESPONSE PRODUCED BY THE SYMPATHETIC AND PARASYMPATHETIC SYSTEMS

Table 5.5 compares the effect of the sympathetic and parasympathetic divisions on various organs. In gen-eral, the sympathetic division prepares a person to ei-ther flee or fight—the fight-or-flight response. To list some of the effects it has on various organs, think of a situation in which you are hiding from a predator. Your body responds by making you more alert. Activ-ities such as digestion and urination are slowed and blood flow to the skeletal muscles is increased. Your heart beats faster, and you start breathing rapidly. You feel a trickle of sweat down your back (and, if you were an animal, your hackles would rise), your hair stands on end, you feel warm, and your mouth goes dry. Your pupils dilate and, if your blood pres-sure were measured, it would surely be high. This summarizes some of the effects of the sympathetic system.

The parasympathetic system generally produces a rest-and-repose response. In brief, it increases secre-tion and smooth muscle activity along the digestive tract, relaxing the sphincters; produces contraction of the urinary bladder and relaxation of the sphincters such as occurs during urination; and is largely re-sponsible for sexual arousal and stimulation of sexual glands. Pupils constrict and hormones that promote the absorption and utilization of nutrients by periph-eral tissue increase. The parasympathetic system is often referred to as the anabolic system because it leads to increased nutrient content in the blood and increased absorption that supports growth, cell divi-sion, and creation and storage of energy.

Receptors of the Parasympathetic System

Similar to the sympathetics, the effect of the parasym-pathetic postganglionic fibers on a target organ de-pends on the type of receptors present in the cells. Two types of receptors—nicotinic and muscarinic—have been identified. The nicotinic receptors are present in the parasympathetic and sympathetic ganglions (Re-member that acetylcholine is secreted here?) and in the neuromuscular junction (recollect that acetyl-choline is secreted by motor neurons). The muscarinic receptors are located in target organs supplied by post-ganglionic parasympathetic fibers. The terms nicotinic and muscarinic are based on the effects of nicotine, a powerful toxin obtained from a variety of sources, in-cluding tobacco, and muscarine, a toxin present in poisonous mushrooms. If a large quantity of nicotine is ingested, it produces symptoms in accordance to the presence of nicotinic receptors; for example, vomiting, diarrhea, sweating (parasympathetic effects), high blood pressure, rapid heart rate and sweating (sympa-thetic effects). By stimulating skeletal muscles, con-vulsion may also occur.

The symptoms of muscarine poisoning produce symptoms that are almost all a result of parasympa-thetic effects, including vomiting, diarrhea, bronchi constriction, low blood pressure, and slow heart rate.

Knowledge of receptors and the actions and distri-bution of parasympathetics and sympathetics is im-portant for all health care professionals. Almost all drugs used in conditions such as asthma, hyperten-sion, common cold, constipation, diarrhea, and many others, have been developed and are being used based on this knowledge. Adverse effects of these drugs can be logically derived if one knows which receptors they affect and whether the drug imitates or opposes the sympathetic/parasympathetic systems.

Although the term autonomic implies automatic func-tion without much interference, the autonomic sys-tem can be influenced and regulated (see Figure 5.51). Similar to the somatic motor system, the autonomic system has many levels of regulatory control. At the lowest level, are the visceral reflexes. Similar to the re-flex arc in the somatic motor system, the visceral re-flex arc consists of a receptor that senses the stimuli and continues as the sensory (afferent) neuron. The sensory neuron conveys the impulse to the spinal cord or brainstem and enters along with the dorsal spinal and cranial nerves. Here, they synapse with a motor (efferent) neuron. In the autonomic system, this is the cell body of the preganglionic fiber. There may be in-terneurons interspersed between the synapses here. Also, other neurons from the brain, hypothalamus, or other areas may synapse with the preganglionic fiber, altering and influencing the reflex. The preganglionic fibers leave the spinal cord/brainstem ventrally to in-nervate the target organs. 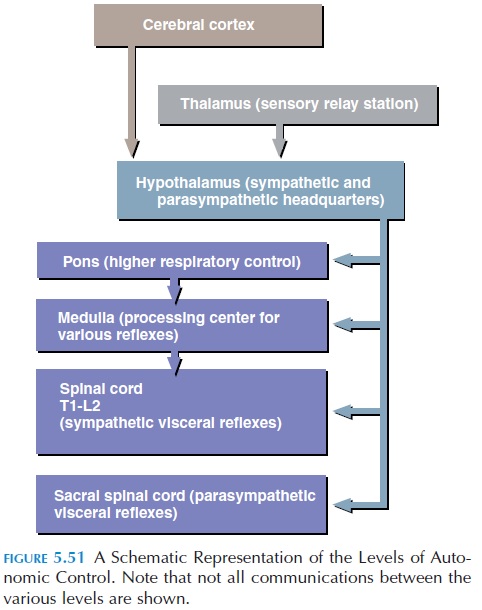 There are of many kinds of reflexes in the viscera. Short reflexes control simple motor responses such as motility of short segments of the gut. The synapse(s) between sensory and motor neurons may be located in a ganglion. Long reflexes tend to control the activity of a whole organ. Many visceral reflexes exist in the body, including the micturition reflex, defecation reflex, and swallowing reflex.

The levels of activity in the sympathetic and parasympathetic divisions are controlled by centers located in the brainstem, which have an effect on spe-cific visceral functions. For example, there are net-works of neurons in the medulla such as those that control: (1) the heart rate and force of contraction— the cardiac center, (2) the caliber of blood vessels— the vasomotor center, (3) the swallowing center, (4) the coughing center, (5) the respiratory center, (6) and defecation and urination. The pons, too, has net-works such as the respiratory center. The centers in the medulla and pons are, in turn, subject to regula-tion by the hypothalamus.

The hypothalamus can be considered the head-quarters for the autonomic system. It must be re-membered that the hypothalamus has numerous nervous connections. For example, it has connec-tions with the limbic system, which is related to emotions, etc.; it communicates with the thalamus, the sensory relay station; it also connects with the cerebral cortex. Thus, activities in any region with which it communicates can influence its own func-tion and that of the autonomic system. Think of all the physiologic changes that take place when you are angry or stressed. Your heart rate goes up, your mus-cles become tense, and your blood pressure rises. The trigger for your anger or stress could be some-thing or someone around you, but the physiologic changes that occur are deep inside you. By reducing stress, perhaps by massage or changing your outlook on life, the functions of the internal organs can be in-fluenced via the autonomic system and its higher lev-els of control.