According to the explanation above, all stimuli seem to be converted to action potentials.

According to the explanation above, all stimuli seem to be converted to action potentials. If so, how does the body know what the original stimulus was? This doctrine, stated by Muller, explains how this hap-pens. The sensation perceived depends on which part of the brain they activate. The pathway taken by action potentials generated by a sense organ is specific from sense organ to the brain. The sensation that is perceived is that for which the receptor is specialized, no matter where along the pathway the activity is initiated. For example, the sense of pressure is perceived as coming from the hand irrespective of where the sensory nerve is stimulated: pressure receptors in the hand, nerve at the elbow, the axilla, in the posterior aspect of the spinal cord where it travels, or even in the brain where it finally arrives.

This law explains that wherever the nerve is stimulated in a sensory pathway, the sensation is projected (perceived) in the area of the body where the sensation normally originates. For example, if, during brain surgery on a conscious patient, the brain receiving area for impulses from the right hand is stimulated, the patient reports sensation in the right hand and not in the hand where the actual stimulation was.

Again, if all stimuli are converted to action potentials, how does the body perceive variations in intensity?

There are two ways by which intensity is transmitted to the brain. One is by altering the frequency of stim-ulation. The other is by the number of receptors that have been stimulated.

Another mechanism the CNS uses to better perceive sensations is lateral inhibition, in which the neuron that is most stimulated inhibits surrounding neurons via interneurons. For example, when the sound produced by striking middle C reaches the ear, the neurons that respond to this particular pitch are most stimulated. When responding by production of action potentials, they inhibit surrounding neurons that respond to the next closest pitch. This way, the sound of middle C is heard sharply.

This term is applied to a single sensory neuron and all its peripheral branches. The number of branches varies, and branches are numerous, especially in the skin. Thereceptive field of a sensory unit is the area from which a stimulus produces a response in that unit. The sensory units tend to overlap the areas sup-plied by other sensory units.

As the stimulus is increased, more and more sensory units are stimulated because the stimuli affect a large area. As a result, more pathways are affected, and the brain perceives more stimuli intensity.

Why Are Some Areas MoreSensitive Than Others?

Some areas, such as the face, fingertips, and toes, are more sensitive than others because there are more sensory neurons innervating a unit area of skin, each with a smaller receptive area. In areas such as the back, the receptive field of each sensory neuron is large and the number of innervating nerves is less (see Figure 5.13). That is why a light touch on the face feels good. But the touch has to be more intense, covering a larger area, in regions such as the back. This is one reason why fingertips are used on the face and the entire palm is used to massage the back. 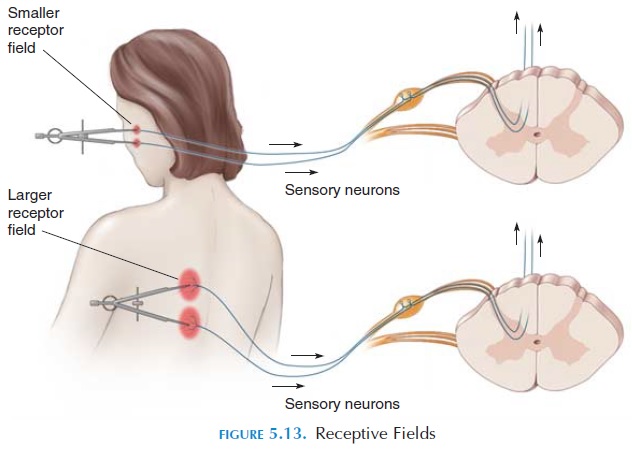