Neurons are classified in many ways, according to their anatomic structure and function.

Neurons are classified in many ways, according to their anatomic structure and function. 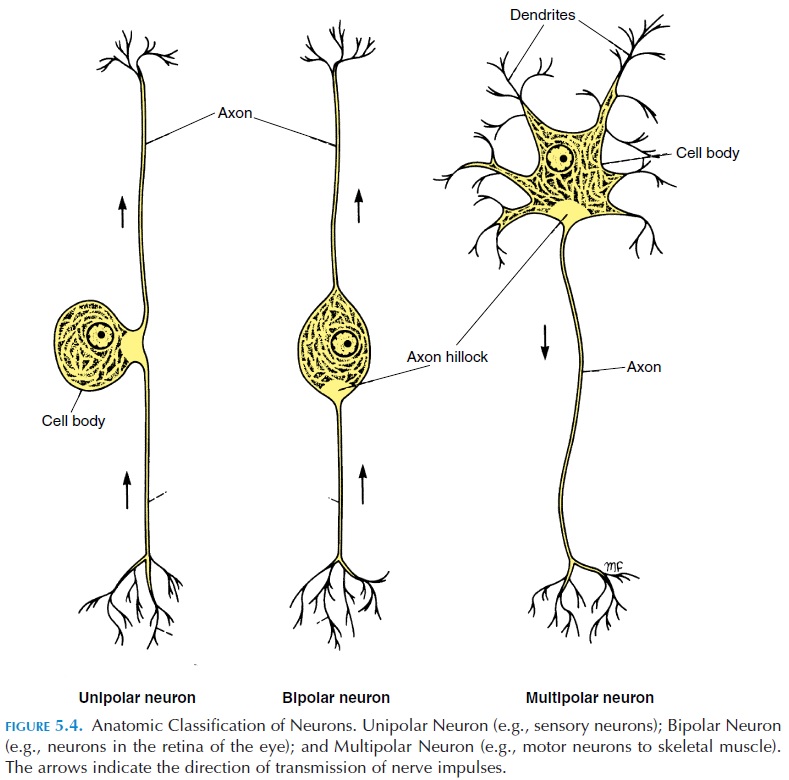 These neurons have two processes extending from ei-ther end of the cell body, the dendrite and the axon (see Figure 5.4). This type of neuron is rare and is found in the retina of the eye.

The cell body in this type lies to one side, with a sin-gle process leading off from one side of the body. This process divides at once into two processes: the axon and the dendrite. Sensory neurons are of this type.

This is the most common neuron, with the cell body having several dendrites and one axon. All the neu-rons motor to the skeletal muscles are of this type.

The neurons may be also classified according to func-tion. These are the sensory, motor, and interneu-rons, or association neurons. Those that take im-pulses to the CNS are known as the sensory neurons or afferent fibers. Of the sensory neurons, the vis-ceral afferents innervate the organs, and the so-matic afferents carry impulses from the surface ofthe body. Sensory neurons may be named according to the type of information they sense. Those afferents that sense information in the external environment are called exteroceptors. Afferents sensing changes in the inside of the body are called interoceptors.

Those that monitor position and movement of skele-tal muscles and joints are the proprioceptors.

The neurons that take impulses away from the CNS are the motor neurons or efferents. Somaticmotor neurons innervate skeletal muscles. Visceral motor neurons are part of the autonomic nervoussystem that innervates various organs of the diges-tive, cardiovascular, respiratory, reproductive, and re-nal systems.

Interneurons are neurons situated between a sen-sory and motor neuron or between any two neurons. Most in number, they are responsible for distribution of sensory information to different areas of the CNS and play an important role in the coordination of mo-tor activity.

Neurons are also classified on the basis of myelination (i.e., according to the presence or absence of myelin sheaths as myelinated or nonmyelinated neurons).