Organization of the Nervous System

The nervous system includes all neural tissue present in the body and accounts for just 3% of total body weight.

Organization of the Nervous System

Classically, the brain and spinal cord are known as the central nervous system (CNS); the rest of the nervous system is theperipheral nervous system(PNS). The CNS (see Figure 5.1) helps integrate, process, and coordinate the sensory input and motor commands. For example, when you see a car hurtling directly toward you, you jump out of its path. The CNS processes the input (the sight of a car) and, based on past experiences and learning (processing and integration), decides that you need to jump out of the way. It commands the relevant muscles to con-tract and move the body and, perhaps, yell at the same time (coordination). Of course, more than this happens inside your body—your heart beats faster, your palms sweat, and your blood pressure increases. 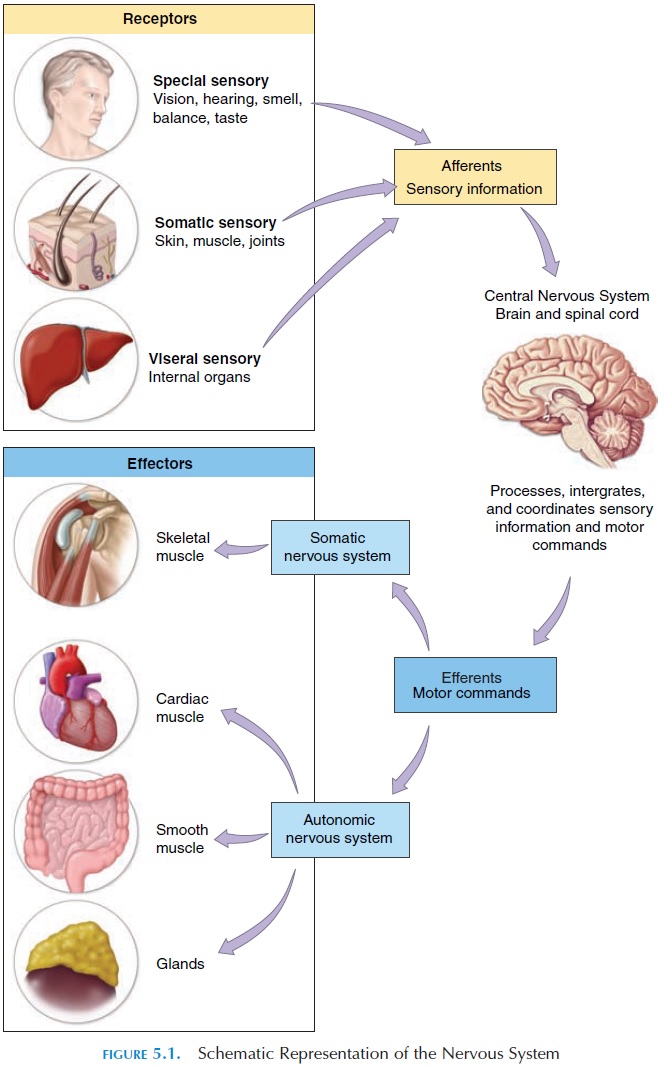 The parts of the nervous system are referred to ac-cording to function. The sensors that sense changes in the internal and external environment are the recep-tors. The nerves that carry impulses from the recep-tors to the CNS are the sensory nerves, or afferents.

The organs that respond to impulses from the CNS are the effectors. The nerves that go to skeletal muscle comprise the somatic nervous system. Reaction may take place before the stimuli reach the conscious level; this response is known as a reflex.

The part of the nervous system responsible for au-tomatic, involuntary regulation of smooth muscle, cardiac muscle, and glands is theautonomic ner-vous system. This system, described later, has two divisions: the sympathetic and parasympathetic di-visions.