Production and Propagation of Impulses

Impulse formation is a complex process and is related to the properties of the cell membrane (review the section on cell membrane, if necessary).

PRODUCTION AND PROPAGATION OF IMPULSES

Impulse formation is a complex process and is related to the properties of the cell membrane (review the section on cell membrane, if necessary). The neurons communicate with each other by chang-ing the electrical potential inside the cell. This is achieved by movement of ions in and out of the cell and is determined by the permeability of the nerve cell membrane. The changes in the neuron (at rest and when stimulated) have been studied using minute electrodes that penetrate inside the neuron.

If two electrodes are placed on the surface of the cell membrane of a neuron and connected to a measuring device (see Figure 5.6), no electrical changes are de-tected. However, if one of the electrodes is pushed into the cell and the other placed on the surface, the recording device will show that the inside of the cell is negative to that of the outside. This is known as the resting membrane potential, or transmembrane potential. 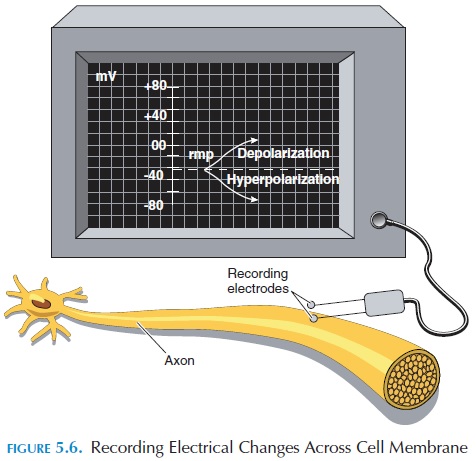 The resting membrane potential is caused by the distribution of ions inside and outside the neurons. The inside of the cell contains large, negatively charged organic particles, and the movement of smaller positively and negatively charged inorganic molecules occurs only through special channels. The cell membrane also has active pumps that use energy to pump ions in and out; therefore, at rest, the inside is maintained more negative than the outside.

At rest, the inside of the neuron (intracellular fluid) has more potassium ions (K ) and proteins (Pr ), and the outside has more sodium (Na ) and chloride ions (Cl ). This is mainly because the cell membrane is not freely permeable to the ions. If it was, the ions would diffuse in and out to equalize the composition in and out of the cell. In this case, because of semiperme-ability, the ions only move in and out of the cell through channels on the cell membrane specific for each ion.

Membrane channels (see Figure 5.7), which are actu-ally proteins,  remain closed, partly closed, or fully opened and are affected by many fac-tors. Some channels are operated by changes in volt-age (voltage-gated channels). At a particular voltage specific to the channel, the channel may be open, al-lowing its particular ions to move freely along the concentration gradient. At other voltages, the chan-nel may be closed, shutting off entry or exit of that ion. Some channels open fully at a positive voltage, others at a negative voltage. 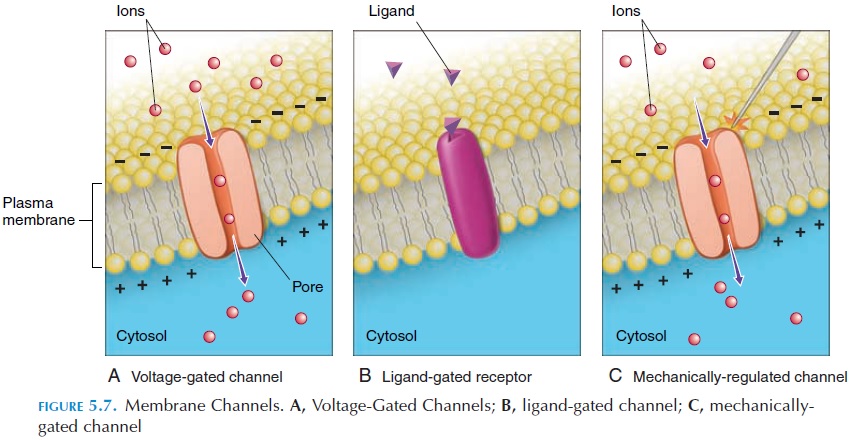 The resting membrane potential in a neuron is about -70 millivolts (mV). The concentration differ-ence of ions (chemical gradient), as well as the dif-ference in electrical charges (electrical gradient), serve as a force to reinforce or oppose movement of ions when the channels open.

For example, when the sodium channels open, sodium tends to move into the cell (along the con-centration gradient). The electrical gradient also helps as sodium is positively charged and the inside is negative (remember that opposite charges attract). Movement of sodium will occur into the cell as long as the channels are open and the gradient exists.

When the potassium channels are open, potassium tends to move from inside the cell to the outside along the chemical gradient. Because the inside is negative, the electrical gradient will tend to oppose it.

When a cell is stimulated, sodium channels open and sodium diffuses into the cell along its electrochemi-cal gradient. The inside becomes less negative and this is known as depolarization. In some cells, if potassium channels open instead, potassium moves out of the cell and the inside becomes more negative, known as hyperpolarization.Soon after the stimuli are removed, the cell returns to its original state and this is known as repolarization (see Figure 5.8). 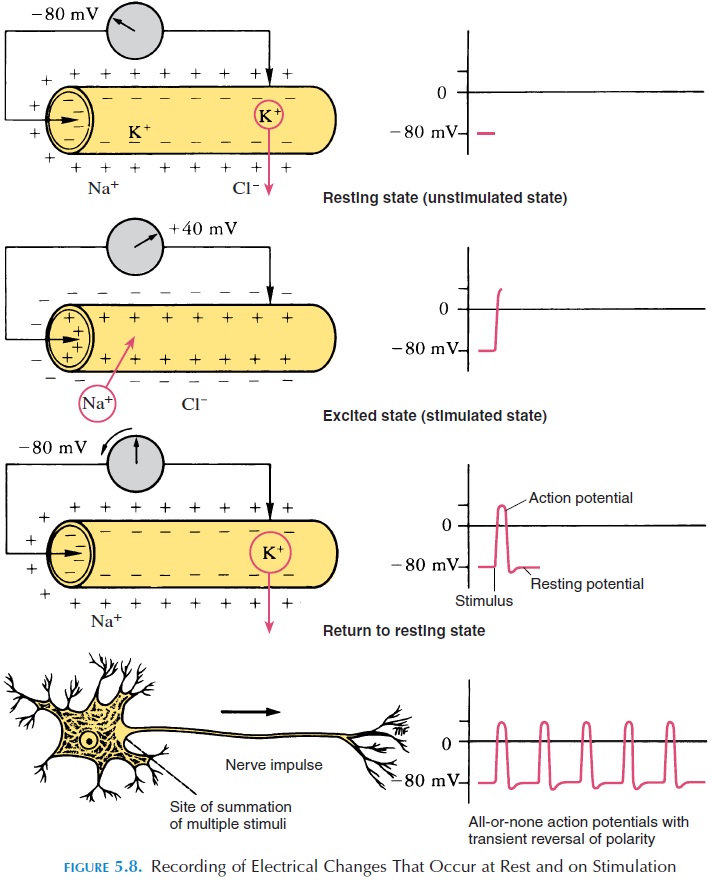 When a neuron is sufficiently stimulated to depolar-ize it to a threshold value of about -60 to -55 mV, many voltage-gated sodium channels are opened and sodium rushes in, further depolarizing the cell. This depolar-ization is rapid and propagated throughout the cell along the axon. An action potential or nerve impulse is a rapid change in potential that is propagated along the cell. The direction of propagation of action poten-tials is from the dendrite or cell body down an axon.

As a result of opening and closing of other voltage-gated channels, the depolarization does not last long and the cell is repolarized to reach its original resting potential. The voltage-gated sodium channels close when the potential becomes more and more positive.

If the stimulus is given again, another action po-tential results. In some neurons, many action poten-tials are produced continuously as long as the stimulus remains (i.e., the stimulus does not have to be given over and over again) and the generation of ac-tion potentials stops after the stimulus is removed.