Neurons generally have a limited capacity to regenerate. For most neurons, cell division stops at birth.

Effect of Pressure on Neurons

Neurons generally have a limited capacity to regenerate. For most neurons, cell division stops at birth. Although the whole neuron cannot be replaced if dam-aged, it is possible for the dendrites and axons to regenerate if the cell body is intact.

If pressure is applied to the axon of a neuron, the lack of oxygen and blood supply reduces its ability to conduct. If the pressure is released after a few hours, the neurons recover in a few weeks.

More severe pressure will present with the same symptoms as a cut to the nerve. If the axon of a neu-ron is cut, the part of the axon distal to the cut de-generates and is phagocytized by the Schwann cells that surround it. This process is known as walleriandegeneration. Macrophages come to the area and re-move the debris. The Schwann cells, however, do not degenerate. Instead, they multiply along the path of the original axon. The axon stump connected to the cell body grows with multiple small branches into the injury site, guided by the cellular cord of multiplying Schwann cells. It is believed the Schwann cells secrete chemicals that attract the growing axon. If the axon grows in the right direction, it may reach its original synaptic contacts and recover. If it grows into the wrong direction, normal function does not return. Chances of recovery are high if the cut ends of the axon are in close contact. The rate of growth of axons is about 1 mm to 2 mm per day and recovery depends on the distance the axon has to regrow to reach the structure it originally innervated (see Figure 5.11). 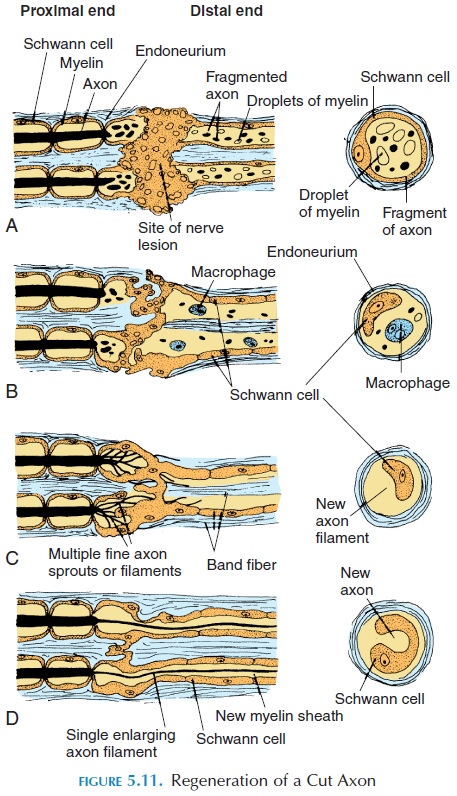 In a cutting-type injury, if the cut ends are in close contact, chance of recovery is high. However, the alignment of the cut ends also matters. It is im-portant for the axon to grow back into the same area occupied by the original axon. If many adjacent ax-ons are cut, the nerve must be aligned so that the right axon grows into the right area. For example, if an axon innervating skeletal muscle grows into the area occupied by a sensory nerve, the neuron eventu-ally dies.

Injury in the CNS

Damaged neurons in the CNS have greater difficulty recovering. This is because, invariably, many neurons are involved. Also, the astrocytes (neuroglia) form scar tissue, which makes it difficult for axons to grow back. In addition, chemicals that inhibit neuron growth may be liberated in the area. After a spinal cord injury, many cells not directly injured die by apoptosis (cell suicide). The reason for this is notclear. Although it was believed that nerves do not multiply, it was recently discovered that new neurons are formed in certain areas of the brain (such as the area for learning). This discovery is encouraging, es-pecially for those with injury to the CNS.

Although the brain accounts for only 2% of the body weight, it accounts for 18% of the energy consumption at rest. Neurons rely solely on aerobic metabolism for their survival. Because they do not have stored glycogen, oxygen and glucose must be continuously sup-plied by the blood. Therefore, injury to neurons occurs if their blood supply is cut off for even a few seconds. The injury is in proportion to the duration of inter-ruption of the blood supply. Stroke is a result of impairment of blood supply to areas of the brain.

Having considered the functional unit of the nervous system: the neuron and its structure and classification; how impulses are generated, propagated, and communicated to other neurons; and how the neurons recover from injury, the structures involved in sensations are addressed.