Neuroglias are the supporting cells. They are five times more abundant than neurons.

Neuroglias are the supporting cells. They are five times more abundant than neurons. There are four types of glial cells in the CNS: the ependymal cells, astro-cytes, microglia, and oligodendrocytes and twotypes in the PNS: Schwann cells, or neurolemmo-cytes,and satellite cells, or ganglionic gliocytes.

The ependymal cells line the cavities in the brain and spinal cord and are responsible for producing, circulating, and monitoring the cerebrospinal fluid—the fluid inside and around the CNS that cushions and protects the brain.

The astrocytes, as the name suggests, are star-shaped. They are present between the blood capillaries and the brain and spinal cord, monitoring the sub-stances that enter and leave the brain and preventing sudden changes in the environment around the CNS. This is the blood-brain barrier, and the astrocytes are responsible for its creation. The astrocytes also help at the time of tissue injury. In addition, they take up neu-rotransmitters from the synapses, break them down and release the products, and make them available to neurons to produce more neurotransmitters. The net-work of astrocytes, located over the entire brain and spinal cord, form a supporting framework for the CNS. The astrocytes are the most abundant of the neu-roglial cells.

Microglia are small cells similar to the monocytes and macrophages in the blood. They engulf dead cells and cellular remnants in the CNS.

Oligodendrocytes are neuroglia with long, slender processes that come in contact with cell bodies and axons in the CNS. The processes form thin sheaths in the region where they contact an axon. This sheath is wound around the axon, serving as insulation. Be-cause the sheath around the axon is made of many layers of the cell membrane, it is composed of 80% lipids and 20% protein.

Now imagine many thin strips of paper (processes of different oligodendrocytes) wrapped around the pencil (axon), separated by small gaps between the strips. This is how an axon is typically myelinated. The gaps between the myelin, known as nodes ofRanvieror internodes, help speed the impulses thattravel down it, and the myelin helps insulate the axon from the surrounding interstitial fluid. The myeli-nated neurons conduct impulses much faster than those that are unmyelinated. The myelinated axons appear white, and the regions dominated by this type of axon tend to be white (white mater). The areas with cell bodies and/or unmyelinated neurons appear gray (gray mater). It is believed that the gray col-oration is a result of the presence of Nissl bodies. 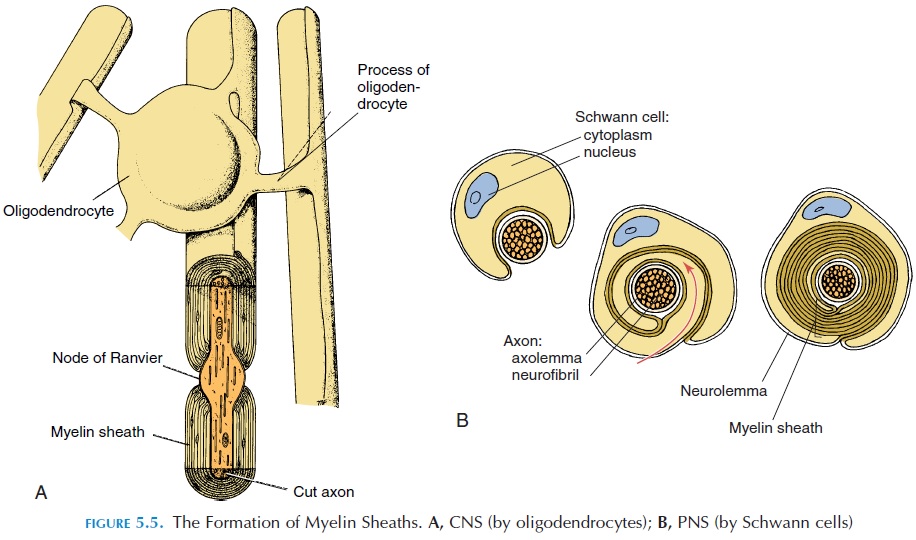 Neuroglial cells also exist in the PNS. One type, theSchwann cells or neurilemmal cells, surround ax-ons and protect them from the surrounding intersti-tial fluid. They are similar in function to the oligo-dendrocytes of the CNS—formation of myelin (see Figure 5.5). Such protection is important as impulses are produced and propagated by ions flowing in and out of the neurons (see below). While all axons are protected by Schwann cells, some axons have the cell membrane of many Schwann cells wrapped around them in segments, with small gaps between the wrappings of any two Schwann cells. These are the myelinated axons.

One type, satellite cells or ganglionic gliocytes, surround the collections of cell bodies of neurons (ganglions) lying outside the CNS.