The arrangement of spinal nerves in the segments controlling the muscles of the neck and limbs is a little complicated because, in the embryo, small muscles supplied by nerves in the ventral rami fuse to form larger muscles.

The arrangement of spinal nerves in the segments controlling the muscles of the neck and limbs is a little complicated because, in the embryo, small muscles supplied by nerves in the ventral rami fuse to form larger muscles. These larger muscles (now identified as single muscles) have compound nerve supply (i.e., they are supplied by nerves originating from more than one spinal segment).

The ventral rami also blend their fibers with that of adjacent ones and a complex interwoven network of nerves is found. These networks are termed nerve plexus, and there are three major ones: thecervical plexus, brachialplexus, and lumbosacral plexus (Figure 5.14).

The cervical plexus consists of the ventral rami of spinal nerves C1–C5 (Figure 5.14). Nerves from here innervate muscles of the neck, shoulder, and the di-aphragm (phrenic nerves C3–5). The sensory compo-nent of this plexus can be visualized in Figure 2.6, showing the dermatomal pattern. It suppliesthe skin of the ear, neck, and upper chest.

The plexus lies in relation to the first four cervical vertebrae, venterolateral to the levator scapulae mus-cle and scalenus medius and deep to the sternoclei-domastoid muscle. Impingement of the plexus results in headaches, neck pain, and breathing difficulties and is most often a result of pressure on the nerves by the suboccipital and sternocleidomastoid muscles or by shortening of the connective tissue located in the base of the skull.

This plexus (Figures 5.14 and 5.18) is formed by the ventral rami of spinal nerves C5–T1. It innervates the shoulder girdle and upper limb. The ventral rami combine and divide in a specific manner as they pass from the vertebral column and neck region into the upper limbs.

These trunks divide into anterior and posterior di-visions. All the divisions pass under the clavicle andover the first rib into the axilla (armpit), where they fuse to form the three cords—lateral, medial, and posterior cords. The cords align around the axillaryartery in the axilla and give rise to the major nerves of the upper limb. Branches from these nerves supply the skin and muscles of the upper limb. 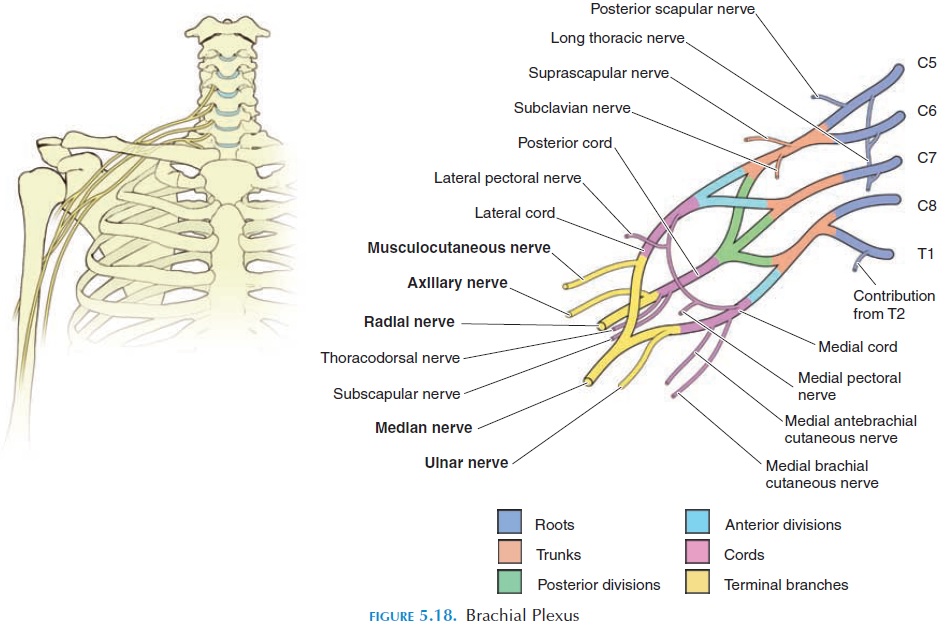 The brachial plexus, being more accessible than the others, is prone for injury in the neck and axilla. Some nerves are also prone for damage, especially those branches that lie superficially. It is important for therapists to understand the relationship of the brachial plexus in the neck and axilla. In the neck, the brachial plexus lies in the posterior triangle and is covered by skin, platysma, and deep fascia. The roots lie between the scaleni anterior and medius. The plexus then becomes dorsal to the clavicle and sub-clavius and superficial to the first digitation of the serratus anterior and the subscapularis to enter the axillary region. Impingement of the brachial plexus is most often a result of the scalenes, pectoralis minor, and subclavius.

Courses of the Major Nerves

The axillary nerve (C5–C6) curves around the upper and anterior aspect of the humerus to supply the del-toid and teres minor muscles and the skin of the shoulder and the shoulder joint (see Figure 5.19). 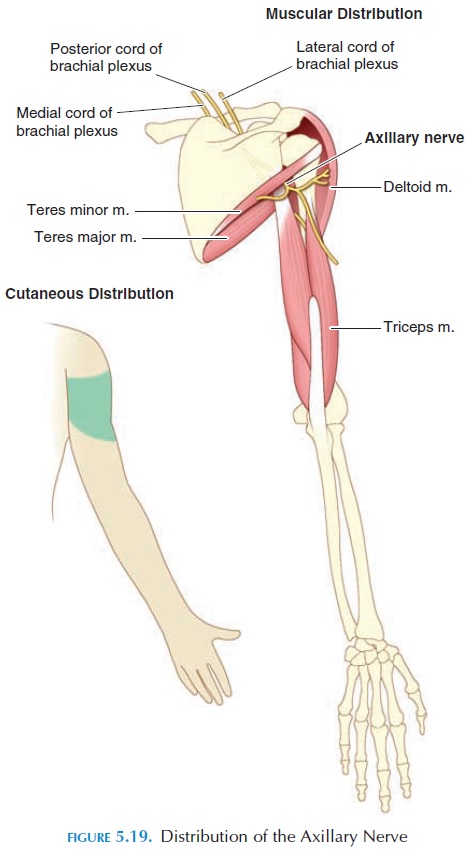 The musculocutaneous nerve (C5–C7) curves lat-erally through the deep portions of the anterior arm and then continues superficially down the lateral sur-face of the forearm to provide sensory innervation (see Figure 5.20). The biceps brachii, coracobrachialis, and brachialis are some major muscles innervated. 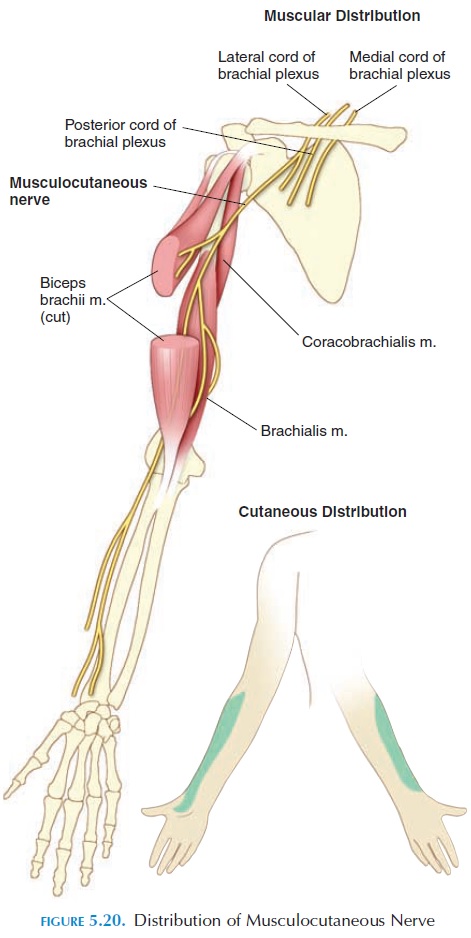 The radial nerve (C5–C8, T1) curves posteriorly and laterally behind the humerus and enters the forearm over the lateral epicondyle of the humerus (see Figure 5.21). Thereafter, it follows the lateral border of the radius and finally continues into the posterior portions of the thumb and first three fin-gers. The principal movements controlled by the ra-dius are (1) extension of the elbow, (2) supination of the forearm and hand, (3) extension of the wrist, fin-gers, and thumb, and (4) abduction of the thumb.

The median nerve (C6–C8, T1) passes down the anteromedial portion of the arm, then distally in the anterolateral portions of the forearm, into the lateral palm of the hand, and into the anterior compartment of the thumb and first two fingers and lateral half of the third finger (see Figure 5.22). 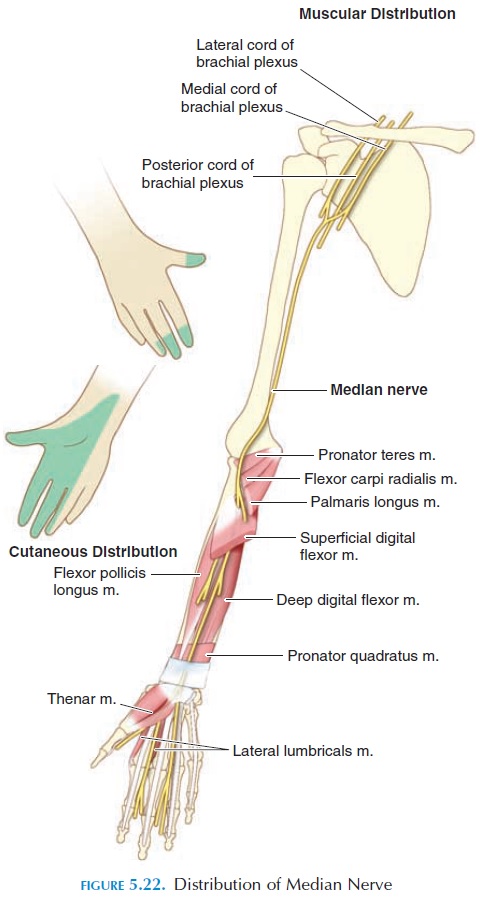 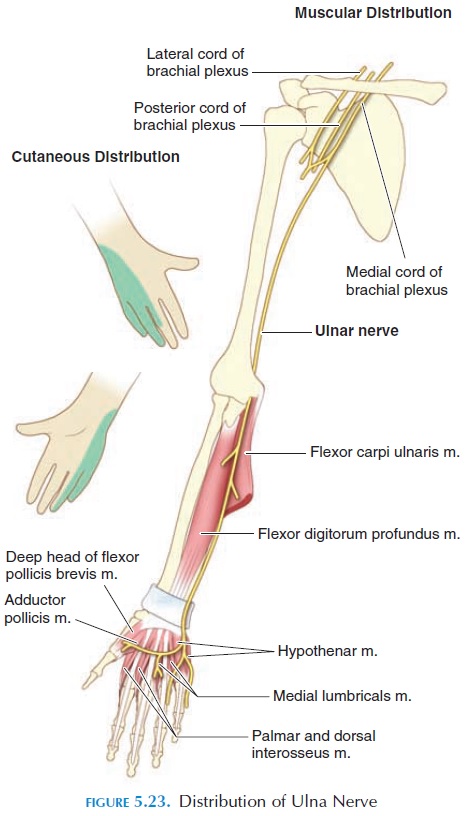 The lumbosacral plexus (see Table 5.3) is formed from the ventral rami of segments T12 to S4 and nerves arising from this plexus supply the pelvic girdle and the lower limbs. This plexus can be divided into the lumbar plexus and the sacral plexus. 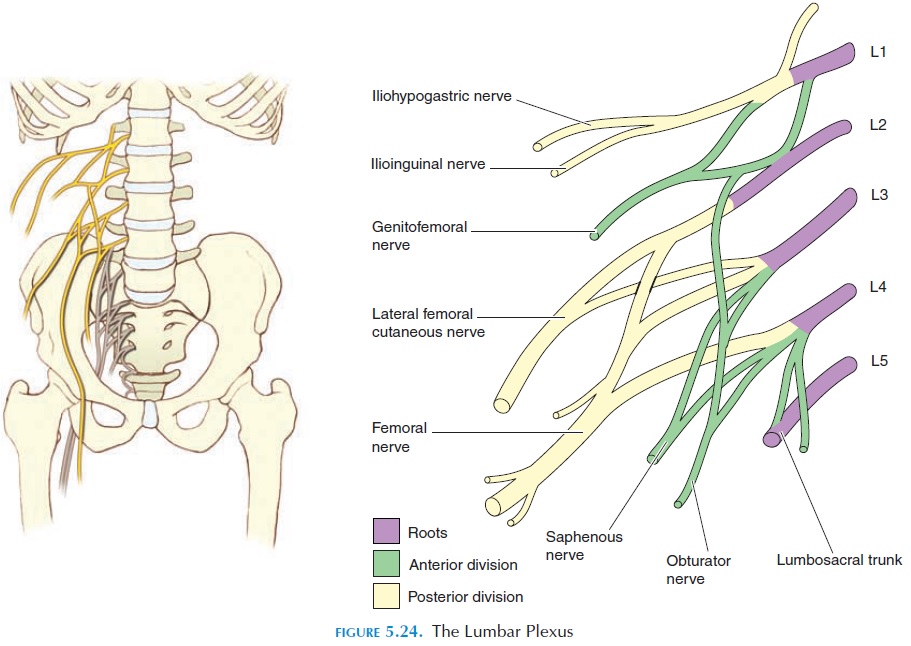 The lumbar plexus is formed from the ventral rami of L1 to L4, with some fibers from T12. The plexus is located anterior to the transverse processes of the lumbar vertebrae on the posterior abdominal wall, ei-ther posterior to the psoas major or among its fasci-culi. Nerves arising from this plexus supply the struc-tures of the lower abdomen and anterior and medial aspect of the lower limb. The lumbar plexus is not as complex as the brachial plexus and has only roots and divisions (anterior and posterior). The major nerves are shown in Figure 5.24. The distribution of the femoral nerve and obturator nerve is shown in Figures 5.25 and 5.26.

Nerve impingement in the lumbar plexus results in pain in the lower back, abdomen, genitalia, thigh, and lower legs. Impingement is often a result of spasm of quadratus lumborum and psoas muscles and shortening of the lumbar dorsal fascia.

The sacral plexus is formed from the ventral rami of L4, L5, and S1–S4. It is located against the lateral and posterior walls of the pelvis between the piriformis and the internal iliac blood vessels. Nerve impingement is most often a result of the piriformis or shortening of the ligaments that stabilize the sacroiliac joint. The nerves arising from this plexus supply the lower back, pelvis, perineum, posterior surface of the lower limb, and the plantar and dorsal surface of the foot (see Fig-ure 5.27). The sciatic nerve is the largest nerve that arises here. 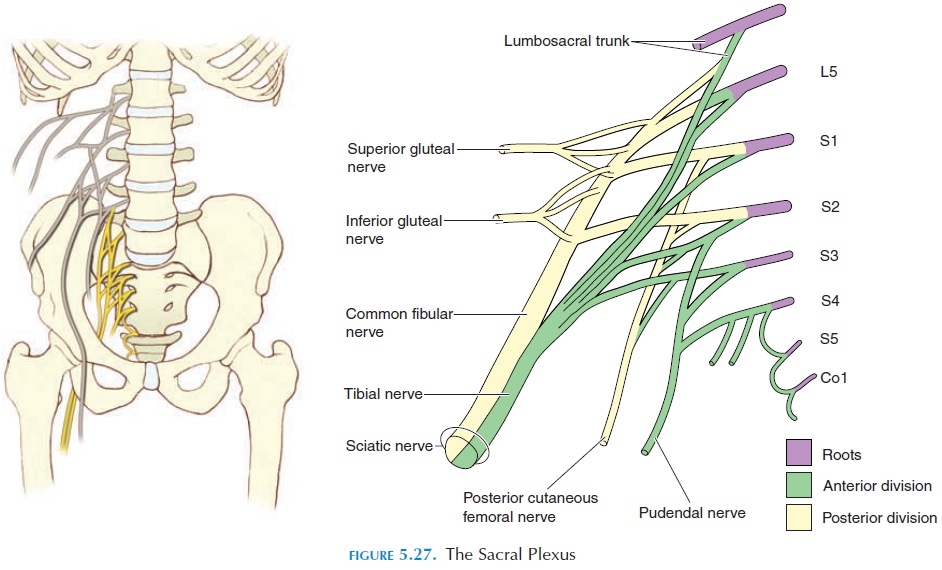 The sciatic nerve (see Figure 5.28) is the largest nerve of the body. It is made up of two nerves, the tibial and common peroneal (common fibular), that are held to-gether by a connective tissue sheath. It originates mainly from L5–S2 and leaves the posterior pelvis medial to the ischial tuberosity. It passes posterior to the femur and deep to the long head of the biceps femoris muscle. At the popliteal fossa, the sciatic nerve divides into the common peroneal and tibial nerves. 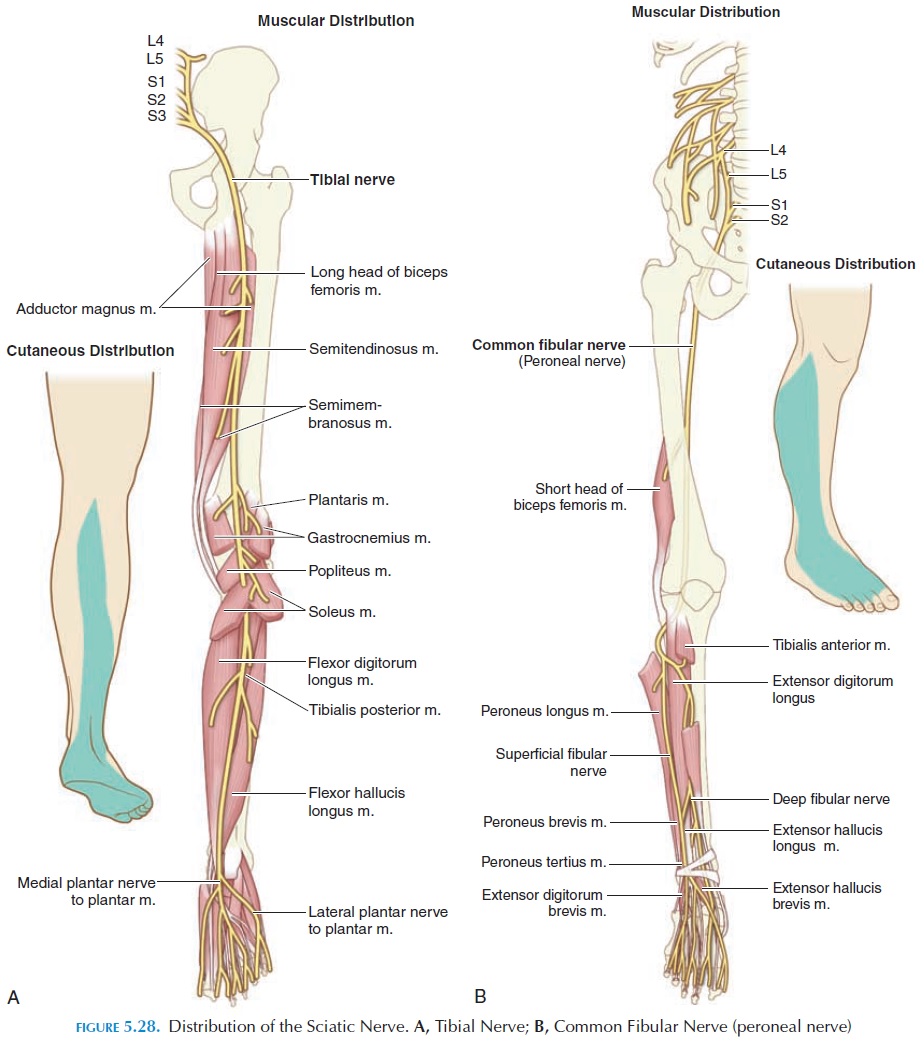 The tibial nerve continues distally in the pos-terior compartment of the leg, lying in the gap be-tween the tibia and the fibula and finally enters the medial side of the foot behind the medial malleolus. In its course, it supplies sensory branches to the skin as well as branches to all muscles of the back of the leg, especially the soleus, gastrocnemius, tibialis pos-terior, and the flexors of the toes.

The common peroneal nerve wraps around the lat-eral side of the fibula where it divides into a superfi-cial and deep peroneal branch. The superficial per-oneal nerve descends in the lateral leg to provide motor innervation to the peroneus muscles and cuta-neous innervation to the dorsum of the foot. These muscles help evert the foot. The deep branch de-scends in the anterior compartment of the leg and controls the tibialis anterior and the extensor mus-cles of the toes. The principal action of these muscles is dorsiflexion of the toes.

Knowledge of the route taken by the major nerves and muscles and area of skin they innervate would help bodyworkers avoid regions where these nerves lie against bone (e.g., ulnar nerve posterior to the medial epicondyle) or are superficial. Occasionally, spasm of muscles overlying the nerves (e.g., piriformis superfi-cial to the sciatic nerve in the gluteal region) may cause pain along the region supplied by the nerve. Therapists, by relaxing these muscles or releasing trigger points, may be able to facilitate pain reduction.