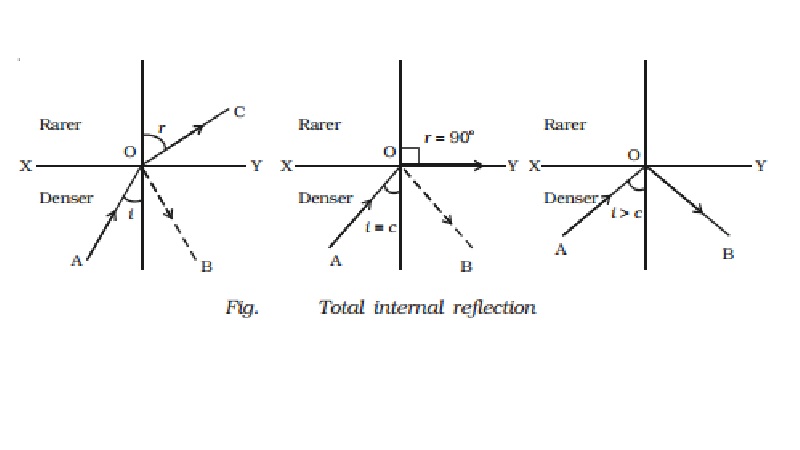 If the angle of incidence is gradually increased, the angle of refraction r will also gradually increase and at a certain stage r becomes 90o. Now the refracted ray OC is bent so much away from the normal and it grazes the surface of separation of two media. The angle of incidence in the denser medium at which the refracted ray just grazes the surface of separation is called the critical angle c of the denser medium.

If i is increased further, refraction is not possible and the incident ray is totally reflected into the same medium itself. This is called total internal reflection.

Hence for total internal reflection to take place (i) light must travel from a denser medium to a rarer medium and (ii) the angle of incidence inside the denser medium must be greater than the critical angle i.e. i > c.

Critical angle for some media 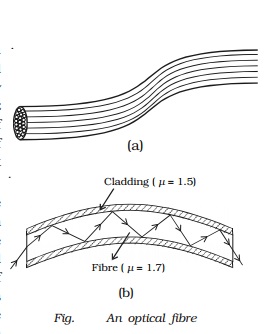 thin fibre made of glass or quartz having radius of the order of micrometer (10?6m). A bundle, of

Fig. b shows the principle of light transmission inside an optical fibre. The refractive index of the material of the core is higher than that of the cladding. When the light is incident at one end of the fibre at a small angle, the light passes inside, undergoes repeated total internal reflections along the fibre and finally comes out. The angle of incidence is always larger than the critical angle of the core material with respect to its cladding. Even if the fibre is bent or twisted, the light can easily travel through the fibre.

Light pipes are used in medical and optical examination. They are also used to transmit communication signals.