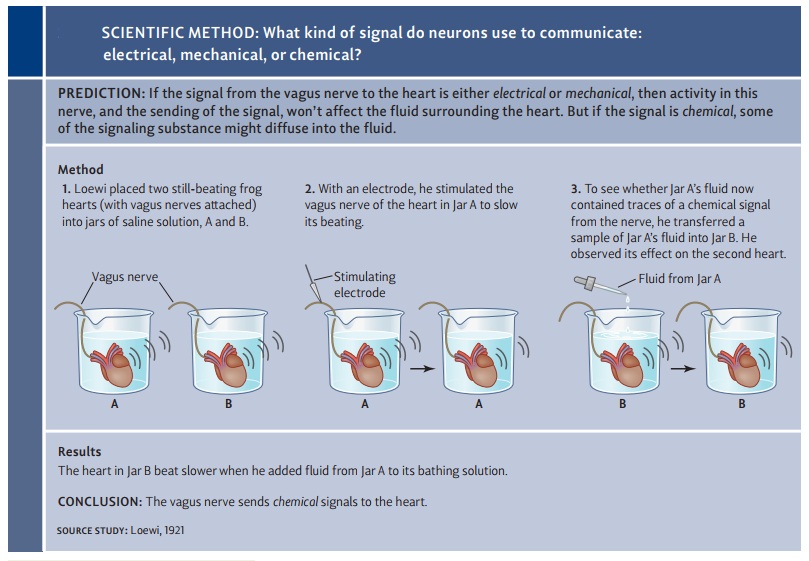 So far, we’ve suggested that communication across the synapse (communication between neurons) functions differently from—and is slower than—the transmission ofinformation within a neuron.

So far, we’ve suggested that communication across the synapse (communication between neurons) functions differently from—and is slower than—the transmission ofinformation within a neuron. But how exactly do neurons communicate across the synapse? The answer turns out to be chemical—the neuron on the “sending” side of the synapse releases certain molecules that drift across the synapse and trigger a response on the “receiving” side. This process is entirely different from the electrical signaling that takes place within a single neuron.

Early insight into these points came in 1921 from an experiment by Otto Loewi, who later earned the Nobel Prize for his work. Loewi knew that activity in the vagusnerve causes the heart rate to slow down, and he hypothesized that the nerve commu-nicates with the heart by releasing a certain chemical. To test this hypothesis, he dis-sected two frogs and removed their hearts. He placed each of the hearts, with nerves still attached, in a separate container filled with fluid. He then electrically stimulated one of the vagus nerves and—not surprisingly—the attached heart immediately slowed its rate of beating. Loewi then took a sample of the fluid from that container and dripped it into the separate container holding the second heart. What should happen? If the signal from the vagus nerve was electrical or mechanical, then this signal would not change the fluid in the first container; and so shifting the fluid into the second container should have no effect. But if the signal was chemical, then some of the relevant molecules would probably diffuse out into the fluid of the first con-tainer and be carried along when the fluid was dripped into the other container. As a result, the fluid (with these molecules) should slow the second heart, just as it slowed the first. This is exactly what happened; so apparently, the signal was chemi-cal (Figure 3.13). 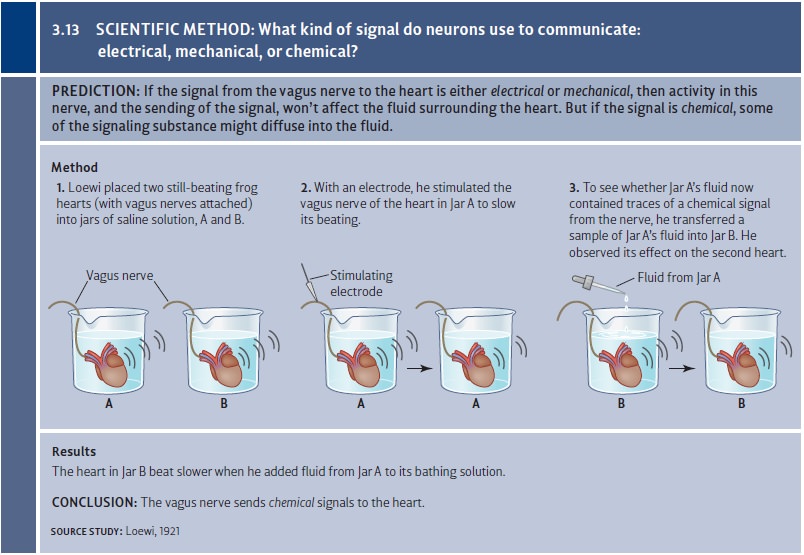 In Loewi’s procedure, the output from the vagus nerve was a chemical that influenced the muscle tissue in the heart. In many other contexts, the output from a neuron is a chemical that triggers a response in another neuron. But how exactly do these chemical messages work? Let’s focus on what happens when one neuron is sending a signal to another neuron. The cell that sends the message is called the presynaptic neuron (it’s the one “before the synapse”), and the actual transmission process begins in the tiny axon terminals of this cell. Within these swellings are many tiny sacs, or synaptic vesicles (“little vessels”), that are like water balloons filled with neurotransmitters—the chemicals that will, when released, influence other neurons.

When the presynaptic neuron fires, some of the vesicles literally burst. They eject their contents into the gap separating the presynaptic cell from the cell that will receive the signal—the postsynaptic neuron (the one “after the synapse”). The neurotransmitter molecules diffuse across this gap and latch onto receptors on the membrane of the post-synaptic cell (Figure 3.14; Figure 3.15A and B). This sequence causes certain ion channels in the postsynaptic membrane to open or close.

As we’ll see, there are several types of neurotransmitters, and each type has different effects on the postsynaptic cell. For example, some neurotransmitters open the chan-nels to (positively charged) sodium ions (Figure 3.15C and D). This flow of ions will decrease membrane’s voltage difference, but if the voltage change is small, the mem-brane may be able to compensate and thus restore the resting potential. 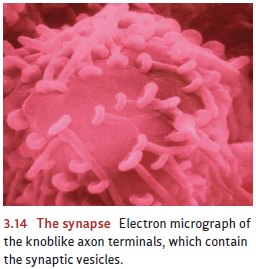 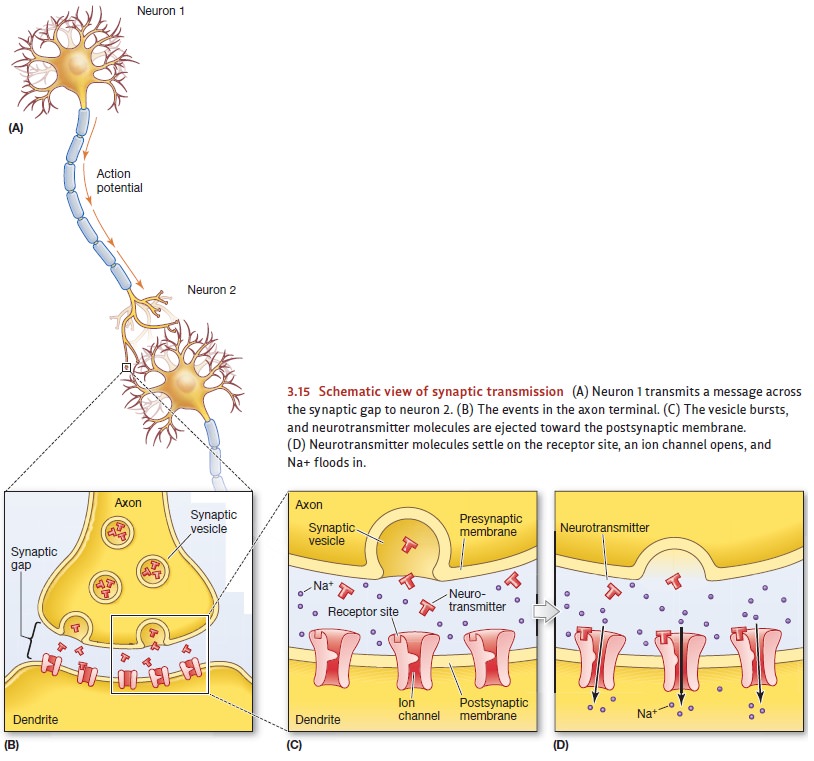 It’s important to realize, though, that this postsynaptic cell is probably receiving inputs from other presynaptic cells: They’re also releasing neurotransmitters that latch onto the cell’s receptors. This activity causes a further flow of sodium into the postsynaptic neuron, driving its voltage farther and farther from the resting level. Eventually, the voltage differ-ence for the postsynaptic cell may reach the cell’s excitation threshold. This triggers an action potential in this cell that will speed down this neuron’s axon, causing it to release neurotransmitters of its own.

Most neurons have synaptic connections with neurons that excite  them  (i.e., that  depolarize  the  membrane, making  an action  potential  more  likely),  as  well  as  with  others  that inhibit them (by hyperpolarizing the membrane, making an action potential less likely). We can think of these inputs  as  “yes”  votes  and  “no”  votes,  and  the response of  the postsynaptic cell will depend on a final tally of the votes—the balance of excitatory yeas and inhibitory nays. If the net value is excitatory, and if this value exceeds the threshold, the cell will fire—that is, produce an action potential.

What happens to the transmitter molecules after they’ve affected the postsynaptic neuron? They can’t just stay where they are, because they might continue exerting their effects long after the presynaptic neuron has stopped firing, thus making any input per-manent. To avoid this problem, some transmitters are inactivated shortly after they’ve been discharged; this is done by special “cleanup” enzymes that break them up into their chemical components. More commonly, though, neurotransmitters are not destroyed but reused. In this process, called synaptic reuptake, the neurotransmitter molecules (after they’ve had their effect on the postsynaptic cell) are ejected from the receptors, vacuumed up by molecular pumps back into the presynaptic axon terminals, and repackaged into new synaptic vesicles.