Methods for Studying the Nervous System: Recording from the Whole Brain 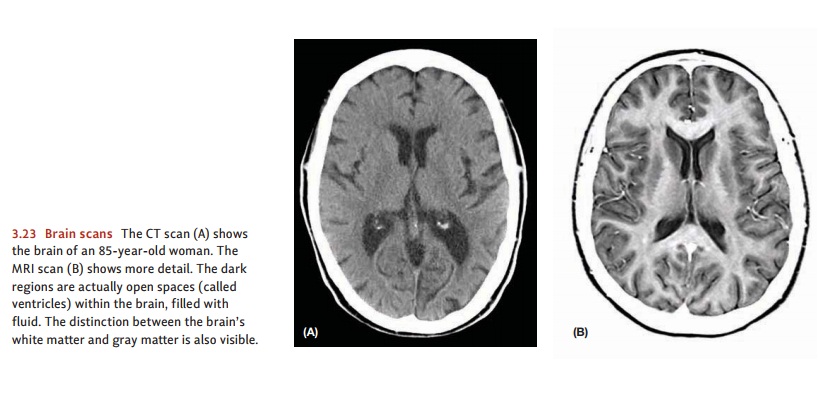 Neuroscientists also rely on techniques that can provide detailed portraits of the whole brain—without in any way disrupting the brain’s functioning.

Recording from the Whole Brain

Neuroscientists also rely on techniques that can provide detailed portraits of the whole brain—without in any way disrupting the brain’s functioning. There’s actually a wide array of such techniques, each with its own strengths and limitations: Some tell us the exact shapes and positions of brain structures but give no information about how active those brain sites are at the moment; others do the reverse—they provide information about activity levels but not about the exact anatomy. Some techniques are exquisitely accurate in locating where the brain is especially active, but they’re less exact about when exactly the activity is occurring. Other techniques reverse this pattern and give us tem-poral information, but not spatial.

As we’ve discussed, communication from one neuron to the next typically relies on chemical signals. However, communication within each neuron (e.g., communica-tion down the axon) relies on an electrical signal. The amount of current involved here is minute—but, of course, many millions of neurons are all active at the same time, and the current generated by all of them together is great enough to be detected by sensitive electrodes placed on the surface of the scalp. This is the basis for electroencephalography—a recording of voltage changes occurring at the scalp that reflect activity in the brain underneath. The result of this procedure is an electroencephalogram, or EEG (Figure 3.22). 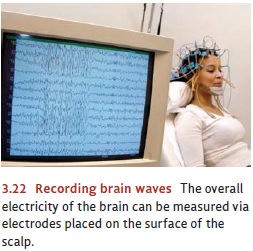 EEGs tell us, for example, that there is often a detectable rhythm in the brain’s elec-trical activity—a rhythm that results from many, many neurons all firing at more or less the same rate.

To detect the brain’s rhythms, we need to record the brain activity over a period of several seconds or longer. Sometimes, though, researchers want to ask how the brain responds electrically to a specific event that takes place at a particular moment in time. In this case, we can measure the changes in the EEG in the brief period just before, during, and after the event. These changes are referred to as an event-related potential (ERP).

Our understanding of the linkage between brain and behavior has been revolution-ized by the development of neuroimaging techniques. These provide remarkable three-dimensional portraits of the brain’s anatomy and functioning, with absolutely no invasion of brain tissue and with the brain’s owner awake and fully conscious throughout the procedure.

One technique for imaging brain anatomy is the CT (computerized tomography)scan, also known as aCAT (computerized axial tomography) scan(Figure 3.23A).In thistechnique, researchers take a series of X-ray pictures of the brain, each from a differ-ent angle, and then use a computer to construct a detailed composite portrait from these images. These scans, which yield precise information about the exact shape and position of structures within a brain, are immensely useful for medical diagnosis (e.g., in detecting tumors or structural abnormalities) and for research (e.g., for locating the brain damage that is the source of a patient’s behavioral or cognitive difficulties). 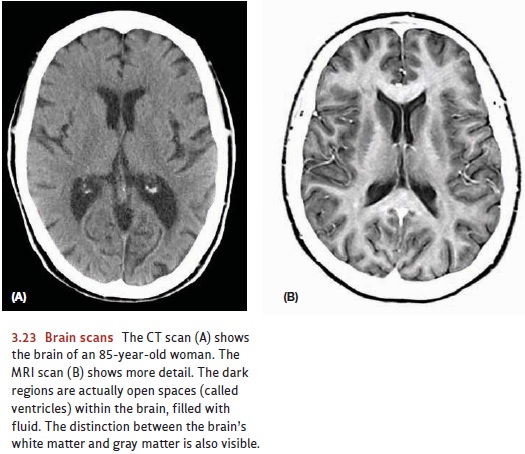 A more widely used neuroimaging technique is magnetic resonance imaging(MRI). MRI scans are safer than CT scans because they don’t involve X-rays. Instead,the person is placed in a strong magnetic field; this aligns the spinning of the nuclei of atoms that make up the brain tissue. Then a brief pulse of electromagnetic energy (a radio wave) is used to disrupt these spins. After the disruption, the spins of the nuclei shift back into alignment with the magnetic field; as this shift happens, the atoms give off electromagnetic energy. This energy is recorded by detectors arrayed around the person’s head, analyzed by a computer, and assembled into a three-dimensional representation of the brain that can show the healthy tissue as well as tumors, tissue degeneration, and the blood clots or leaks that may signal strokes (Figure 3.23B).

CT and MRI scans provide precise anatomical depictions; but they cannot tell us about the brain’s moment-by-moment functioning, including which areas of the brain are particularly active at any point in time and which are less active. To record this kind of brain activity, experimenters use other techniques, including positron emissiontomography (PET) scans. In a PET scan, the participant is injected with a safe dose ofsome radioisotope—often an isotope of a sugar that resembles glucose, the brain’s metabolic fuel. The PET scan then keeps track of how this radioactivity is distributed across the brain. The key idea here is that the brain cells that are more active at any moment will need to use more glucose and so, in this setup, will absorb more radioac-tivity. By keeping track of the pattern of radioactivity, we can know where the glucose is being used, and hence we can know which regions within the brain are particularly active.

A newer technique called functional MRI (fMRI) scanning adapts standard MRI procedures to study brain activity (Figure 3.24). In most cases, fMRI scans rely on the fact that hemoglobin—the molecule that carries oxygen in the bloodstream—is less sensitive to magnetism when it is actually transporting an oxygen molecule than when it is not. By keeping track of the hemoglobin, therefore, detectors can measure the ratio of oxygenated to deoxygenated blood; this ratio yields a measurement called the blood-oxygenation-level-dependent signal, or BOLDsignal. When neural regions are especially active, this ratio increases because theactive tissue is demanding more oxygen. By tracking the BOLD signal, therefore, we can measure activity in the brain. 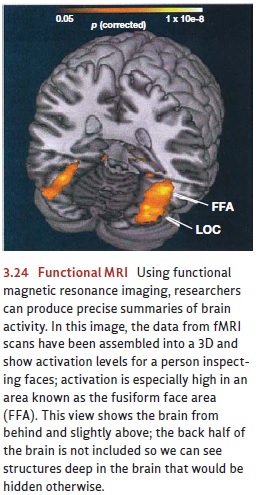 One advantage of fMRI scans over PET scans lies in their spatial precision, and fMRI scans can identify locations within 3 or 4 millimeters. A larger advantage, though, lies in fMRI’s ability to tell when the brain activity took place. PET scans sum-marize the brain’s activity level over a period of 40 seconds or so; and they cannot tell us when, within this time window, the activity took place. The BOLD signal, in con-trast, provides measurements across just a few seconds; and this greater temporal precision is one of several reasons that fMRI scans are used far more often than PET. (We should note that an EEG record yields even more precise information about timing, but—unlike an fMRI—it cannot tell us exactly where in the brain the activity is taking place.)

Whether we’re relying on PET scans or fMRI scans, though, we need to keep a com-plication in view: The entire brain is active all of the time—its cells are always using glu-cose and always needing oxygen. This is because neurons are living cells and require energy to sustain themselves and, in particular, to maintain their resting potential. What PET and fMRI seek to measure, therefore, are the increases beyond this constant state of activity. In other words, the measurement is not “which areas are active when someone is (say) listening to music?” Instead, the measurement is “which areas become more active when someone is listening to music?” These increases are typically assessed by a process that, in the end, resembles simple subtraction: Researchers measure the brain’s activity when someone is engaged in the task that’s being investigated, and they subtract from this value a measurement of the brain’s activity when the person is not engaged in the task. Of course, it’s important to design this baseline measurement carefully, so that (like any control condition) it is identical to the experimental condition in all ways except for the factor that the researchers are especially interested in. Thus, careful design of the control condition becomes part of the craft of using neuroimaging techniques.