Communication through the Bloodstream 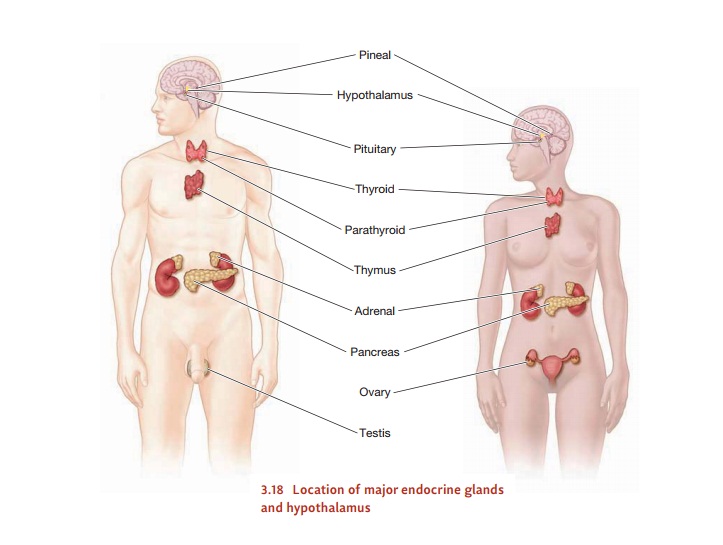 We’re almost done with our discussion of how the nervous system manages its communication.

COMMUNICATION THROUGH  THE BLOODSTREAM

We’re almost done with our discussion of how the nervous system manages its commu-nication. But we need to touch briefly on one more aspect of this communication; namely, the signals that are transmitted by means of chemical messages mixed into the blood and thus distributed throughout the body. This type of communication is, in important ways, very different from the one we’ve been considering. Still, there are also important parallels between signaling from neuron to neuron, across the synapse, and signaling across much greater distances, via the bloodstream.

In the brain and throughout the body, the circulation of blood serves many pur-poses. Blood delivers oxygen and nutrients and carries away the waste products created by ordinary cell metabolism. This supply of nutrients is, of course, crucial for all cells; but it’s especially important for the nervous system because neurons are energy glut-tons. Although the human brain averages just 2 or 3% of our body weight, it burns up roughly 18% of the calories we take in; it uses a similarly high proportion of the total oxygen taken in by our lungs. 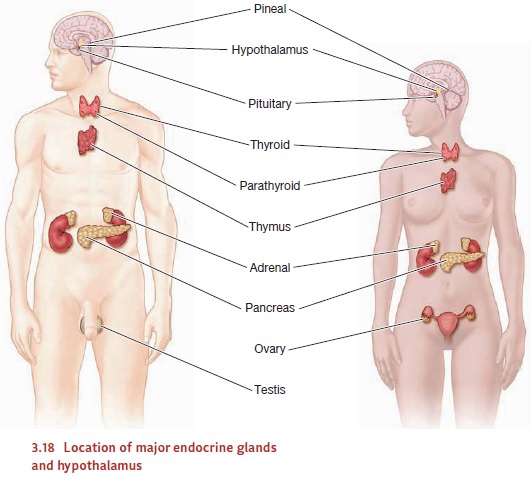 The circulation of blood also provides a means of sending signals from one loca-tion to another. This other means of internal communication is called the endocrinesystem (Table 3.2 and Figure 3.18). In this system, variousglandsrelease chemicalsecretions called hormones into the bloodstream and in this way affect structures that are often far removed from their biochemical birthplace. As an example, take the pituitary gland. One of its components secretes a hormone that tells the kidney to decrease the amount of water excreted in the urine—a useful mechanism when the body is short of water. Or consider the adrenal glands, positioned on top of the kidneys. These glands produce several chemicals that govern the body’s response to fear or stress; we’ll have much more to say about these two glands and their function-ing in our later discussion of motivation.

At first glance, the communication provided by the endocrine glands seems very dif-ferent from that provided by the nervous system. Neurotransmitters only have to cross the synaptic gap, which is less than 1/10,000 of a millimeter wide, and their effects are virtually immediate. The transmitters are then quickly reabsorbed or destroyed, and so their effects are quite brief. In contrast, the chemical messages employed by the endocrine system often have to travel great distances within the body, and so their effect is inevitably slower but also longer lasting.

Despite these differences, the two communication systems have a lot in common. Endocrine messages are launched into the bloodstream and thus travel everywhere the blood travels, reaching virtually all parts of the body. Still, these messages are detected only by specialized receptors at particular locations; in this way, endocrine messages have well-defined targets just like the neurotransmitters do.

Neurotransmission and the endocrine system are also alike because both systems rely on chemical substances as their messengers. Indeed, they often use the same substances because a number of chemicals serve both as hormones and as neurotransmitters.

Norepinephrine, for example, is one of the hormones secreted by the adrenal gland; and it’s also an important neurotransmitter. Moreover, the effects produced by norepinephrine as a hormone overlap substantially with the effects produced by activating the neurons that use norepinephrine as their transmitter. Relationships like these suggest that neurons and the cells of the endocrine glands may have evolved from a common origin— an ancestral signaling system from which both our endocrine and nervous systems are derived (LeRoith, Shiloach, & Roth, 1982).