Notice, then, that plasticity has its advantages and disadvantages. On the positive side, plasticity makes it possible to “rewire” the nervous system in response to new informa-tion and new experience.

Repairing Damage to the Nervous System

Notice, then, that plasticity has its advantages and disadvantages. On the positive side, plasticity makes it possible to “rewire” the nervous system in response to new informa-tion and new experience. On the negative side, plasticity may in some circumstances undermine the stability of a pattern of neural connections and thus may be disruptive. So perhaps it’s not surprising that different species have evolved to have different degrees of plasticity, with the pattern presumably dependent on that species’ need for flexibility or for longer-term retention.

There’s one arena, though, in which plasticity is certainly desirable: If the nervous system is damaged through injury or disease, the effects can be disastrous. It would be wonderful, therefore, if the nervous system could repair itself by growing new neurons or reestablishing new connections. This sort of self-repair is often possible in the peripheral nervous system; there, neurons can regenerate their axons even after the original axon has been severed. Unfortunately, this sort of regrowth after damage seems not to occur in humans’ central nervous system, and here, once nerve fibers are dam-aged, they generally stay damaged. (For some of the mechanisms blocking this self-repair, see W.-Y.Kim & Snider, 2008.)

Is there some way, however, to use the processes of plasticity observed in healthy brains to restore damaged brains? If so, we might be able to repair the damage created by injury—such as the spinal injury suf-fered by actor Christopher Reeve, well known for his role in the Superman movies (Figure 3.39). After his injury, Reeve spent the rest of his life paralyzed but devoted his energy and talent to encouraging research on spinal cord injuries and other nerve damage. A means of restoring damaged brains might also give hope to those suffering from Alzheimer’s dis-ease or Parkinson’s disease, both of which involve the destruc-tion of brain tissue (Figure 3.40).

Researchers are actively exploring these issues; some of their efforts are focused on encouraging the growth of new neurons (e.g., W.-Y. Kim & Snider, 2008), and other research 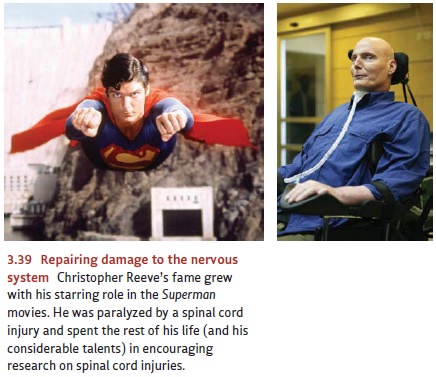 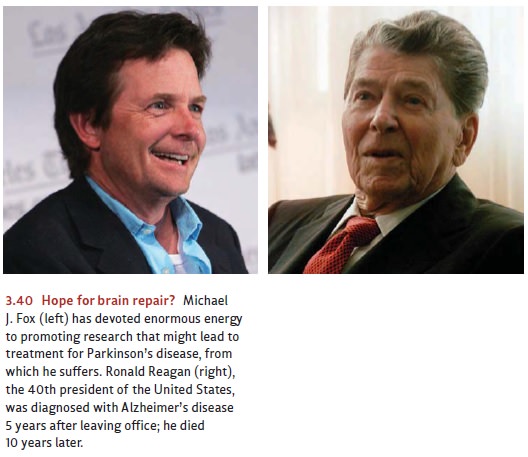 is seeking to implant new tissue into the brain in order to replace the damaged cells. Some of the most exciting work, however, is in a third category and involves a mix of implanting tissue and encouraging growth. Specifically, this effort involves implanting, into an area of damage, the same sorts of stem cells that are responsible for building the nervous system in the first place. Stem cells are, in general, cells that are found in early stages of an organ-ism’s development and that have not yet begun to specialize or differentiate in any way. The idea in using these cells is that we would not be replacing the damaged brain tissue directly. Instead, the stem cells would, once in place, serve as precursors of the cells the brain needs—so the brain could, in effect, grow its own replacements.

Preliminary studies in animals suggest that when stem cells are injected into a patch of neurons, the cells are—as we would hope—induced to turn into healthy neurons just like their neighbors, taking the same shape, producing the same neurotransmitters, and filling in for dead neurons (Holm et al., 2001; Isacson, 1999; Philips et al., 2001; Sawamoto et al., 2001). Thus it seems plausible that stem-cell therapy may provide a means of treatment for various forms of brain injury—and so far the results have been quite encouraging (Kondziolka et al., 2000; Veizovic, Beech, Stroemer, Watson, & Hodges, 2001). In one remarkable study, researchers inserted human stem cells into the damaged spines of laboratory rats. The rats, which had been paralyzed at the study’s start, recovered well enough so that they could walk again (Cizkova et al., 2007).

Research in this domain continues. In early 2009, the U.S. Food and Drug Administration gave permission for the first clinical trials for stem-cell therapy in humans who had suffered spinal cord injury. However, the progress of research in this arena has been slow—largely due to an ethical debate over where the stem cells usually come from. As part of a fertility treatment, a woman’s ova are sometimes removed, fertilized in a labo-ratory, and allowed to develop into large masses of cells. One of these masses is then placed back into the woman in hopes that it will implant in the uterus and develop into a normal pregnancy. The other masses—the ones not implanted—were for many years the main sources for stem cells, and there lies the problem: In principle, these other masses might also have been implanted and might also have developed into a human fetus. On that basis, some people have argued that use of these cells for any other purpose is essen-tially a form of abortion and thus is unacceptable to anyone who opposes abortion.

This issue led President George W. Bush to limit the use of federal research money for studies relying on embryonic stem cells. Early in 2009, President Barack Obama reversed that policy—so we can now expect the pace of research to accelerate. Meanwhile, investigators are also seeking to develop alternative sources of stem cells; this may allow us to avoid the ethical debate altogether. One way or another, stem cell research is certain to continue; and in light of the evidence so far, this research holds enormous promise for treating—and perhaps reversing—a range of profoundly dis-abling diseases as well as helping people who have suffered tragic injuries.