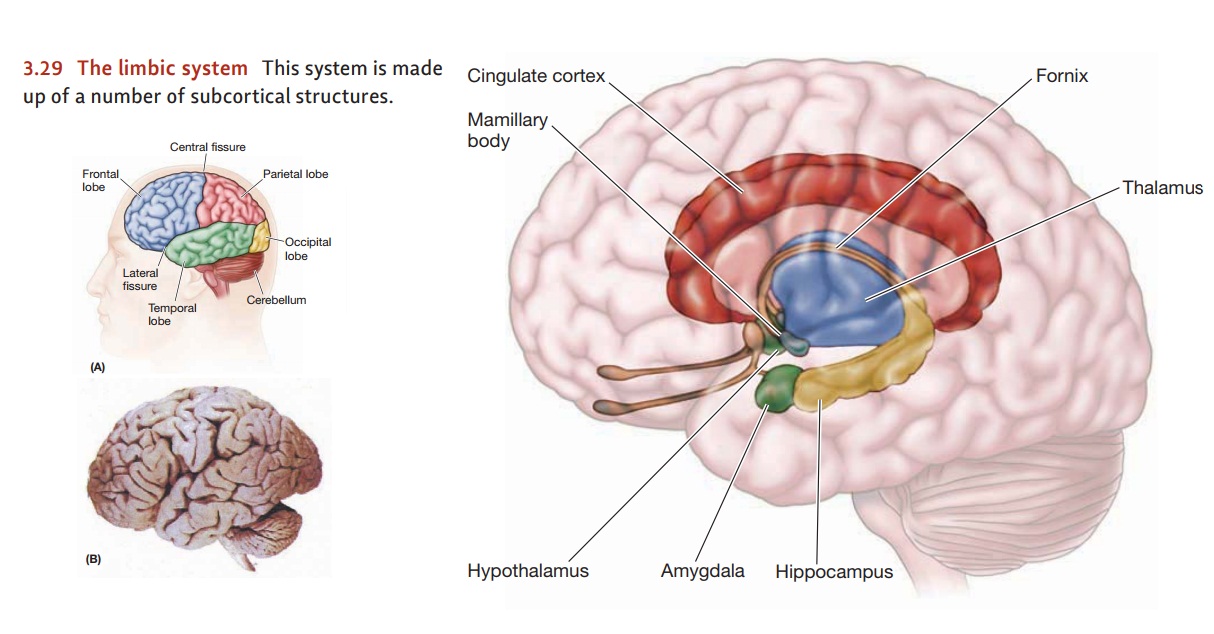 The peripheral nervous system is crucial. Without it, no motion of the body would be possible; no information would be received about the external world; the body would be unable to control its own digestion or blood circulation.

The peripheral nervous system is crucial. Without it, no motion of the body would be possible; no information would be received about the external world; the body would be unable to control its own digestion or blood circulation. Still, the aspect of the nervous system most interesting to psychologists is the central nervous system. It’s here that we find the complex circuitry crucial for perception, memory, and thinking. It’s the CNS that contains the mechanisms that define each person’s personality, control his or her emotional responses, and more.

The CNS, as we’ve seen, includes the spinal cord and the brain itself. The spinal cord, for most of its length, actually does look like a cord; it has separate paths for nerves carrying afferent information (i.e., information arriving in the CNS) and nerves carrying efferent commands (information exiting the CNS). Inside the head, the spinal cord becomes larger and looks something like the cone part of an ice cream cone. Structures at the very top of the cord—looking roughly like the ice cream on top of the cone—form the brain stem (Figure 3.27). The medulla is at the bottom of the brain stem; among its other roles, the medulla controls our breathing and blood circulation. It also helps us maintain our balance by controlling head orientation and limb positions in relation to gravity. Above the medulla is the pons, which is one of the most

important brain areas for controlling the brain’s overall level of attentiveness and helps govern the timing of sleep and dreaming. 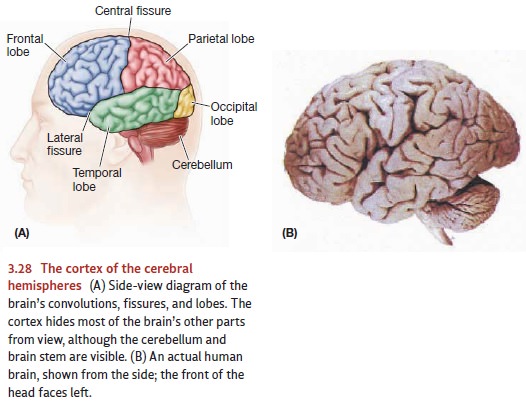 Just behind the brain stem is the cerebellum (Figure 3.28A). For many years, inves-tigators believed the cerebellum’s main role was to control balance and coordinate movements—especially rapid and carefully timed movements. Recent studies confirm this role, but suggest that the cerebellum also has a diverse set of other functions. Damage to this organ can cause problems in spatial reasoning, in discriminating sounds, and in integrating the input received from various sensory systems (J. Bower & Parsons, 2003).

Sitting on top of the pons are two more structures—the midbrain and thalamus (see Figure 3.27). Both of these structures serve as relay stations directing information to the forebrain, where the information is more fully processed and interpreted. But these structures also have other roles. The midbrain, for example, helps regulate our experience of pain and plays a key role in modulating our mood as well as shaping our motivation.

On top of these structures is the forebrain—by far the largest part of the human brain. Indeed, photographs of the brain (Figure 3.28B) show little other than the forebrain because this structure is large enough in humans to surround most of the other brain parts and hide them from view. Of course, we can see only the outer sur-face of the forebrain in such pictures; this is the cerebral cortex (cortex is the Latin word for “tree bark”).

The cortex is just a thin covering on the outer surface of the brain; on average, it is a mere 3 mm thick. Nonetheless, there is a great deal of cortical tissue; by some estimates, the cortex constitutes 80% of the human brain (Kolb & Whishaw, 2009). This consider-able volume is made possible by the fact that the cortex, thin as it is, consists of a very large sheet of tissue; if stretched out flat, it would cover roughly 2.7 square feet (2,500 cm2). But the cortex isn’t stretched flat; instead, it’s crumpled up and jammed into the limited space inside the skull. This crumpling produces the brain’s most obvious visual feature—the wrinkles, or convolutions, that cover the brain’s outer surface.

Some of the “valleys” in between the wrinkles are actually deep grooves that divide the brain into different anatomical sections. The deepest groove is the longitudinal fissure, run-ning from the front of the brain to the back and dividing the brain into two halves— specifically, the left and the right cerebral hemispheres. Other fissures divide the cortex in each hemisphere into four lobes, named after the bones that cover them—bones that, as a group, make up the skull. The frontal lobes form the front of the brain, right behind the forehead. The central fissure divides the frontal lobes on each side of the brain from the parietal lobes, the brain’s topmost part. The bottom edge of the frontal lobes is marked bythe lateral fissure, and below this are the temporal lobes. Finally, at the very back of the brain—directly adjoining the parietal and temporal lobes—are the occipital lobes. 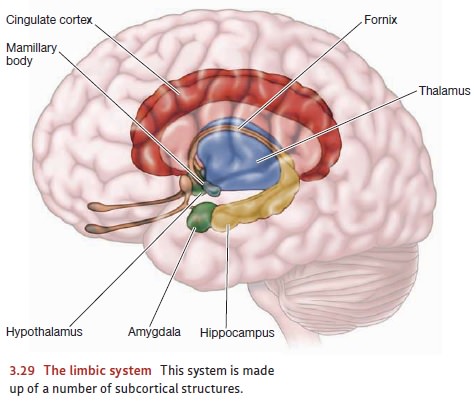 As we’ll see, the cortex—the outer surface of all four lobes—controls many func-tions. Because these functions are so important to what we think, feel, and do, we’ll address them in detail in a later section. But the structures beneath the cortex are just as important. One of these is the hypothalamus, positioned directly under-neath the thalamus and crucially involved in the control of motivated behaviors such as eating , drinking , and sexual activity . Surrounding the thal-amus and hypothalamus is a set of interconnected structures that form the limbicsystem (Figure 3.29). This system—especially one of its parts, the amygdala—plays a key role in modulating our emotional reactions and seems to serve roughly as an “evaluator ” that helps determine whether a stimulus is a threat or not, famil-iar or not, and so on. Nearby is the hippocampus, which is pivotal for learning and memory as well as for our navigation through space. (In some texts, the hippocam-pus is considered part of the limbic system, following an organization scheme laid down more than 50 years ago. More recent analyses, however, indicate that this ear-lier scheme is anatomically and functionally misleading. For the original scheme, see MacLean, 1949, 1952; for a more recent perspective, see Kotter & Meyer, 1992; LeDoux, 1996.)