The Results of Cortical Damage 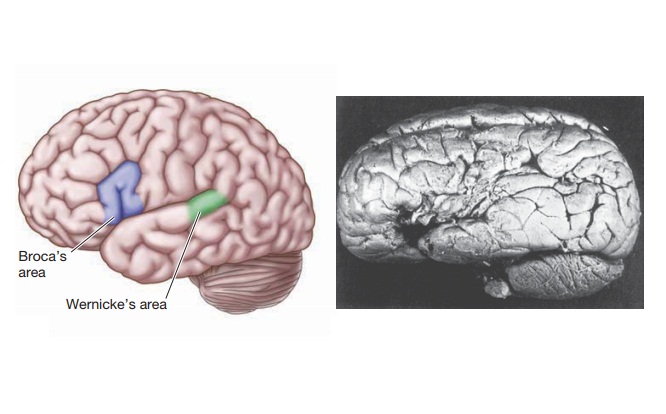 We mentioned earlier that our understanding of any brain region depends on multiple sources of data.

The Results of Cortical Damage

We mentioned earlier that our understanding of any brain region depends on multiple sources of data. For studies of the association cortex, however, neuropsychological studies (studies of brain damage) have often been our earliest indicators of a brain region’s function. Let’s therefore take a closer look at the association cortex through the lens provided by brain damage.

Lesions in the cortex of the frontal lobe sometimes produce apraxias—serious distur-bances in the initiation or organization of voluntary action. In some apraxias, the patient cannot perform well-known actions such as saluting or waving good-bye when asked to do so. In other cases, seemingly simple actions become fragmented and dis-organized. When asked to light a cigarette, the patient may strike a match against a matchbox and then keep striking it after it’s already burning; or, he may light the match and then put it into his mouth instead of the cigarette. These deficits are not the result of simple paralysis, since the patient can readily perform each part of the action by itself. His problem is in initiating the sequence or in selecting the right com-ponents and fitting them together.

DISORDERS OF  PERCEPTION AND ATTENTION

In other disorders, the patient suffers a disruption in the way she perceives the world. Some patients (for example) lose the ability to perceive motion, and so they cannot tell the speed or direction of a moving object. As one patient put it, “When I’m looking at the car first, it seems far away. But then when I want to cross the road, suddenly the car is very near” (Zihl, Von Cramon, & Mai, 1983). Other patients suffer brain damage that disrupts their ability to perceive color; they describe the world as clothed only in “dirty shades of gray” (Gazzaniga, Ivry, & Mangun, 2009).

Other patients seem able to see, but they can’t recognize what they see. This pattern is referred to as visual agnosia and is usually produced by damage to the occipital cor-tex or the rearmost part of the parietal cortex. A patient with agnosia can often describe the shape, color, and texture of an object before her eyes; but can recognize the object only through means other than vision. For example, a patient shown an ordinary fork might describe it as “points on top of a stick,” but she would not be able to name the object or describe how to use it. However, the moment the patient feels the fork in her hands, she easily identifies it.

Agnosia is a problem in recognition, not in seeing. This is made especially clear by a case in which a patient was shown a glove and asked what it was. The patient described the glove as “a continuous surface infolded in itself . . . [with] five outpouch-ings, if this is the word”. Perhaps, the patient thought, it might be a “change purse . . . for coins of five sizes.” Plainly, there’s nothing wrong with this per-son’s vision (or his verbal fluency!), but it’s clear that he had no clue about what the glove actually was.

One subtype of agnosia, known as prosopagnosia, usually involves damage to areas in both the temporal and parietal lobes. Patients with prosopagnosia have trouble recog-nizing faces—even immensely familiar faces. In one often-quoted case, a person suffer-ing from prosopagnosia complained to a waiter that another patron in the restaurant was rudely staring at him while he ate. It turned out, however, that this prosopagnosic diner was looking into a mirror on the restaurant wall and had failed to recognize his own reflection.

In still other disorders, the patient’s problem is one of attention, so that the patient seems utterly oblivious to certain aspects of the world. A striking example is the so-called neglect syndrome, which typically results from damage to certain areas on the right side of the parietal lobe. A patient with this disorder seems not to realize that the left-hand side of the world exists. If asked, for example, to read compound words like toothpick or baseball, the patient reads pick and ball. When asked to draw the face of a clock, he squeezes all the numbers onto the clock’s right side (Figure 3.35). When eating , he selects and eats food only from the right side of his plate. When dressing , he ignores the left shirt sleeve and pants leg; when shav-ing , he leaves the left side of his face unshaven (Awh, Dhaliwal, Christensen, & Matsukura, 2001; Duncan et al., 1999; Rafal & Robertson, 1995; Robertson & Manly, 1999). 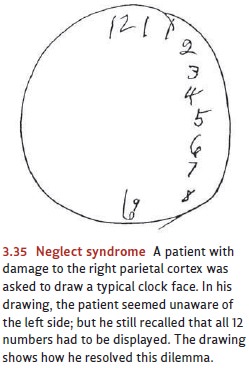 Other lesions in the cortex lead to disruptions of the production or comprehension of language. Disorders of this kind are called aphasias, and they’re almost always pro-duced by lesions (strokes, typically) in the left hemisphere.

Early studies suggested that aphasias could be divided into two broad types: one that seemed primarily to involve the production of speech, and one that seemed primarily to involve the comprehension of speech. Aphasias of speech production were often referred to as nonfluent aphasias and typically involved lesions in a region of the left frontal lobe, called Broca’s area after the French physician Pierre-Paul Broca, who in 1861 first pre-dicted its relation to speech (Figure 3.36). The result of this disorder may be mute silence, or speech that resembles a staccato, spoken telegram: “Here . . . head . . . opera-tion . . . here . . . speech . . . none . . . talking . . . what . . . illness”. 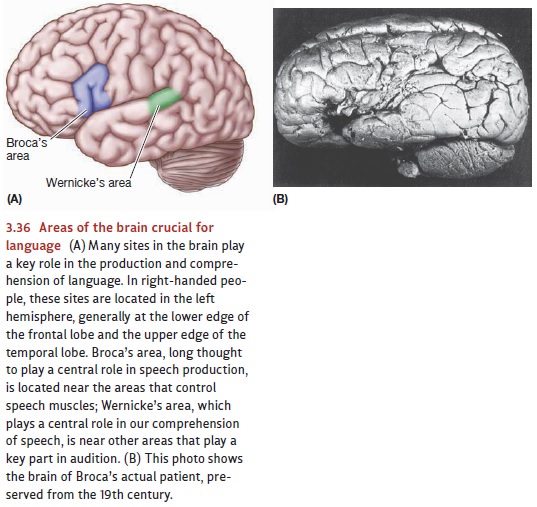 A different pattern is associated with the so-called fluent aphasias—cases in which patients seem able to produce speech but don’t understand what is said to them, though they usually answer anyway. Unlike patients with nonfluent aphasias, those with fluent aphasias talk freely and rapidly; but while they utter many words, they say very little. The sentences they produce are reasonably grammatical, but they’re “word salad”—largely composed of the little filler words that provide scant information. A typical example is, “I was over the other one, and then after they had been in the depart-ment, I was in this one”. Fluent aphasias are usually asso-ciated with damage to a brain site known as Wernicke’s area—a region that borders on the auditory primary projection area and is named after the nineteenth-century neurol-ogist Carl Wernicke.

This distinction—between disorders of speech production associated with damage to Broca’s area and those of comprehension associated with damage to Wernicke’s area—works as a coarse characterization of aphasia. But to capture the real nature and the full range of types of aphasia, we must considerably refine the distinction. The rea-son is simple: Like most mental activities, speech production and comprehension involve the coordination of many different steps, and many different processes. These include processes needed to “look up” word meanings in one’s “mental dictionary,” processes needed to figure out the structural relationships within a sentence, processes needed to integrate information gleaned about a sentence’s structure with the mean-ings of the words within the sentence, and so on . Since each of these processes relies on its own set of brain pathways, damage to those pathways disrupts the process. As a result, the disruption observed in aphasia is often quite specific—it involves impairment to a particular processing step, which then leads to disruption of all subsequent processes that depend on that step. In many cases, this disruption seems mostly to affect speech production; in other cases, the disruption is primarily visible in comprehension; and in still other cases, the disruption is clear in both activities (see Cabeza & Nyberg, 2000; Demonet, Wise, & Frackowiak, 1993; Grodzinsky & Santi, 2008; Habib, Demonet, & Frackowiak, 1996).

DISORDERS OF PLANNING AND SOCIALCOGNITION

Earlier, we referred to the famous case of Phineas Gage. After an iron rod was driven through his head, Gage could still speak and move fairly normally. But something subtler had changed. A medical report on Gage put it this way:

He is fitful, irreverent, indulging at times in the grossest profanity (which was not pre-viously his custom), manifesting but little deference for his fellows, impatient of restraint or advice when it conflicts with his desires, at times pertinaciously obstinate, yet capricious and vacillating, devising many plans of future operation, which are no sooner arranged than they are abandoned in turn for others appearing more feasible. Previous to his injury . . . he possessed a well-balanced mind . . . was energetic and per-sistent in executing all his plans of operation. In this regard his mind was radically changed, so decidedly that his friends and acquaintances said he was “no longer Gage.”

Gage’s symptoms fit reasonably well with other things we know about the effect of damage to the frontmost part of the frontal lobe—the prefrontal area (Bradshaw, 2001; Lichter & Cummings, 2001; Milner & Petrides, 1984). In general, damage here seems to disrupt the person’s executive control over her own thinking—and so she loses the capacity to set pri-orities, override habits, make plans, choose a strategy, ignore a distractor, and more.

This disruption shows up in many aspects of the person’s behavior. Outside the lab-oratory, she is unable to control her own impulses. She is likely to give in to habit and seize on whatever temptation a situation offers. In the lab, we can document this dis-ruption with the Wisconsin Card-Sorting Task. In this task, the person is given a deck of cards, with symbols on each card; the cards vary in the number, shape, and color of the symbols. Initially, the person has to sort the cards according to (say) the color of the symbols; midway through the task, however, the rule is changed. Now he has to sort according to the symbols’ shape. Patients with frontal lobe damage have enormous difficulty with the task and typically show a pattern of perseveration—continuing to sort according to the initial rule despite explicit feedback that they’re now doing the task incorrectly (e.g., Goldman-Rakic, 1998).

A related pattern is revealed when patients with frontal lobe damage are asked to make a copy of a drawing. For example, when asked to copy Figure 3.37A, a patient 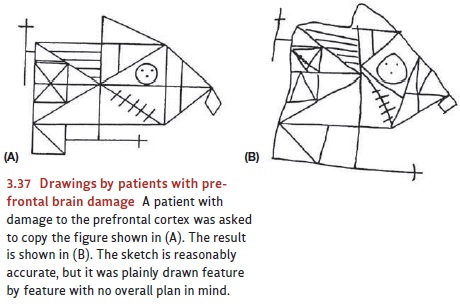 produced the drawing shown in Figure 3.37B. The copy preserves many features of the original, but close inspection makes it clear that the patient drew the copy with no particular plan in mind. The large rectangle that defines much of the shape was never drawn; the diagonal lines that organize the figure were drawn in a piecemeal fashion. Many details are correctly reproduced but were not drawn in any sort of order; instead, these details were added whenever they happened to catch the patient’s attention (Kimberg, D’Esposito, & Farah, 1998; for more on the brain’s processes of executive control, see Duncan, 1995; Gilbert & Shallice, 2002; Kane & Engle, 2003; Stuss & Levine, 2002).