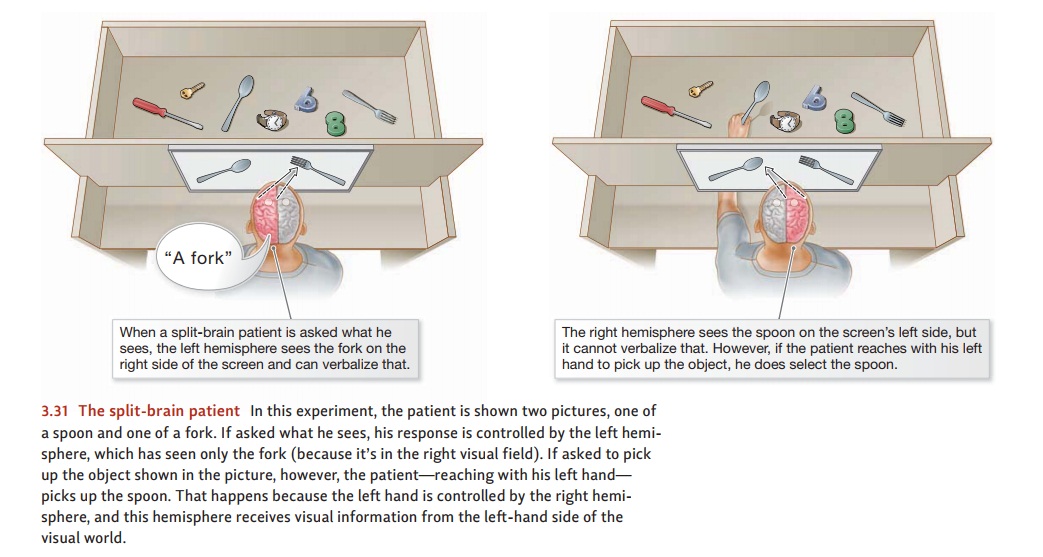 The entire human brain is more or less symmetrical around the midline, so there’s a thalamus on the left side of the brain and another on the right.

The entire human brain is more or less symmetrical around the midline, so there’s a thalamus on the left side of the brain and another on the right. There’s also a left-side amygdala and a right-side one. Of course, the same is true for the cortex itself: There’s a temporal cortex in the left hemisphere and another in the right, a left occipital cortex and a right one, and so on. In almost all cases—cortical and subcortical—the left and right structures have roughly the same shape, the same position in their respective sides of the brain, and the same pattern of connections to other brain areas. Even so, there are some anatomical distinctions between the left-side and right-side structures. We can also document differences in function, showing that the left-hemisphere structures play a somewhat different role from the corresponding right-hemisphere structures.

The asymmetry in function between the two brain halves is called lateralization, and its manifestations influence phenomena that include language use and the per- 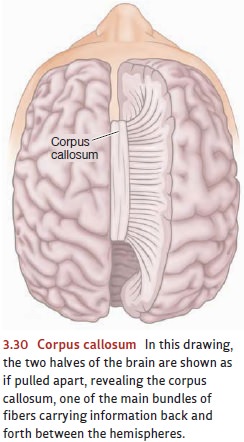 ception and understanding of spatial organization (Springer & Deutsch, 1998). Still, it’s important to realize that the two halves of the brain, each performing somewhat different functions, work closely together under almost all circumstances. This inte-gration is made possible by the commissures—thick bundles of fibers that carry infor-mation back and forth between the two hemispheres. The largest and probably most important commissure is the corpus callosum, but several other structures also ensure that the two brain halves work together as partners in virtually all mental tasks (Figure 3.30).

In some people, these neurological bridges between the hemispheres have been cut for medical reasons. This was, for example, a last-resort treatment for many years in cases of severe epilepsy. The idea was that the epileptic seizure would start in one hemisphere and spread to the other, and this spread could be prevented by disconnect-ing the two brain halves from each other (Bogen, Fisher, & Vogel, 1965; D. Wilson, Reeves, Gazzaniga, & Culver, 1977). The procedure has largely been abandoned by physicians, who are turning to less drastic surgeries for even the most extreme cases of epilepsy (Woiciechowsky, Vogel, Meyer, & Lehmann, 1997). Nonetheless, this medical procedure has produced a number of “split-brain patients”; this provides an extraordi-nary research opportunity by allowing us to examine how the brain halves function when they aren’t in full communication with each other.

This research makes it clear that each hemisphere has its own specialized capacities (Figure 3.31). For most people, the left hemisphere has sophisticated language skills and is capable of making sophisticated inferences. The right hemisphere, in contrast, has only limited language skills; but it outperforms the left hemisphere in a variety of spa-tial tasks such as recognizing faces and perceiving complex patterns (Gazzaniga, Ivry, & Mangun, 2002; Kingstone, Freisen, & Gazzaniga, 2000). 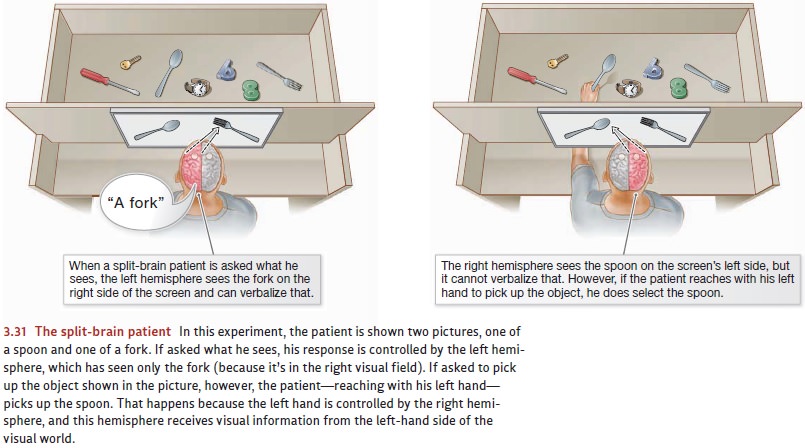 These differences between the left and right cerebral hemispheres are striking, but they’re clearly distinct from many of the conceptions of hemispheric function written for the general public. Some popular authors go so far as to equate left-hemisphere function with Western science and right-hemisphere function with Eastern culture and mysticism. In the same vein, others have argued that Western societies overemphasize rational and analytic “left-brain” functions at the expense of intuitive, artistic, “right-brain” functions.

These popular conceptions contain a kernel of truth because, as we’ve seen, the two hemispheres are different in several aspects of their functioning. But these often-mentioned conceptions go far beyond the available evidence and are sometimes inconsistent with it (Efron, 1990; J. Levy, 1985). Worse, these popular conceptions are entirely misleading when they imply that the two cerebral hemi-spheres, each with its own talents and strategies, endlessly compete for control of our mental life. Instead, each of us has a single brain. Each part of the brain—not just the cerebral hemispheres—is quite differentiated and so contributes its own specialized abilities to the activity of the whole. But in the end, the complex, sophis-ticated skills that we each display depend on the whole brain and on the coordinated actions of all its components. Our hemispheres are not cerebral competitors. Instead, they pool their specialized capacities to produce a seamlessly integrated, single mental self.