Building Blocks of the Nervous System 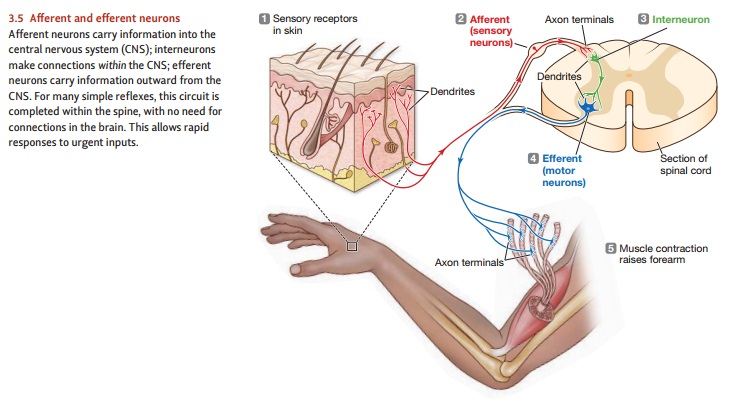 Descartes’ views were based largely on conjecture, because in his time scientists knew little about how the nervous system functions.

BUILDING BLOCKS OF THE NERVOUS SYSTEM

Descartes’ views were based largely on conjecture, because in his time scientists knew little about how the nervous system functions. Today, roughly five centuries later, we know  far  more  and  our  theorizing  can  be  correspondingly  more  sophisticated. In fact, the data and research tools now available have allowed the development of a new and rapidly growing field called neuroscience—a multidisciplinary effort that seeks  to  understand  the  nature,  function,  and  origins  of  the  nervous  system. Neuroscience draws some of its insights from psychology but also draws on biol-ogy,  computer  science,  medicine,  and  other  fields.  The  subject  matter  of  neuro-science  is  similarly  broad,  ranging  from  fine-grained  research  projects  that scrutinize  molecular  interactions  inside  individual  nerve  cells  to  much  broader efforts asking how large tracts of neural tissue give rise to conscious experience.

Let’s be clear from the start that studying the brain is, to say the least, an enormously daunting task. Within the human brain, the total number of neurons—the individual cells that act as the main information processors of the nervous system—has been esti-mated to be as high as 100 billion, roughly the number of stars in the Milky Way, and each of these neurons connects to as many as 50 thousand others (Nauta & Feirtag, 1986). The brain also contains another type of cell, glia, whose function we’re just begin-ning to understand. In some parts of the brain, glia outnumber the neurons by 10 to 1. All these cells, and all their interconnections, are contained within an organ that weighs only 3 to 4 pounds—leading many writers to suggest that the human brain is the most complex object in the universe.

As a first step in understanding this complexity, let’s look at the basic building blocks of the nervous system—the neurons and glia. We’ll then turn to the nerveimpulse—the means through which individual neurons communicate with each other.

The neuron is a cell that specializes in sending and receiving information. Neurons typically have three main parts: the dendrites, the cell body (or soma), and the axon (Figure 3.3). The dendrites, the “input” side of the neuron, receive signals from many other neurons. In most neurons, the dendrites are heavily branched, like a thick and tan-

gled bush. The cell body contains the neuron’s nucleus and all the elements needed for the normal metabolic activities of these cells. The axon, finally, is the “output” side of the neuron and sends neural impulses to other neurons. The axon usually extends outward from the cell body like a wispy thread, and it may fork into several branches at its end.

Neurons come in many shapes and sizes (Figure 3.4). Their cell bodies vary from 5 to about 100 microns in diameter (1 micron = 1/1,000 millimeter). In comparison, the aver-age human hair has a diameter of about 100 microns. Neurons’ dendrites are typically short—say, a few hundred microns. Axons, however, can be much longer. For example, the longest axons in humans are those of the motor neurons, which transmit neural impulses from the brain to the muscles. The motor neurons that allow us to wiggle our toes are, in most people, more than a meter long. As a result, these particular neurons, with their small cell bodies connected to very long axons, have roughly the same proportions as a basket-ball attached to a garden hose a mile and a half long.

The motor neuron carries an efferent signal 1that allows the brain to control the mus-cles. Efferent neurons in general carry information from the brain to some destination outside the brain. Other neurons convey information inward; these afferent neurons keep the nervous system informed about both the external world and the body’s internal environment (Figure 3.5).* Some of the afferent neurons are attached to spe-cialized receptor cells that respond to external energies such as pressure, chemical changes, light, and so on. These receptor cells translate (more technically, transduce) the physical stimuli into electrical changes, which then trigger a nervous impulse in other neurons.

It turns out, though, that roughly 99% of the brain’s nerve cells are neither afferent nor efferent neurons. Instead, they’re neurons that make connections within the central nervous system, and they’re divided into two types: The projection neurons link one area of the central nervous system to some other (perhaps distant) area; to perform this function, these nerve cells typically have long axons. The interneurons, in contrast, make “local” connections within the nervous system and usually have either very short axons or none at all. (Be aware that some neuroscientists use the term interneuron to refer to both of these nerve cell types—e.g., Kolb & Whishaw, 2009.) 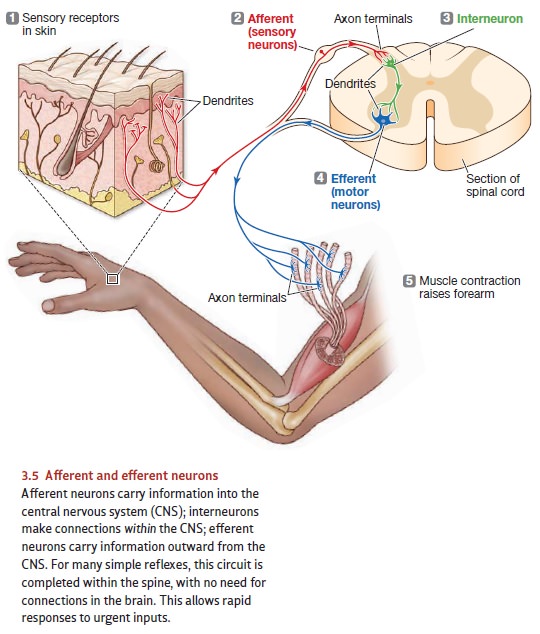 What about the other type of cells that make up the brain—the glia (Figure 3.6)? For many years, scholars thought the glia played only a few roles—holding the neurons in place and supplying them with nutrients and oxygen. Indeed, this second-class status is reflected in the word glia itself, which comes from the Greek for “glue” or “slime.” 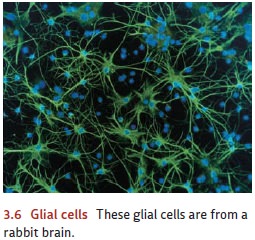 It turns out, however, that glia have a rather broad set of crucial functions. First, as we’ve long supposed, glia do provide the nourishment for the neurons—but we’ve also learned that glia play a key role in controlling the nutrient supply. For example, the sugar glucose is the main fuel for the nervous system, but most of the energy neurons need does not come from glucose directly. Instead the glia convert the glucose into another molecule, called lactate, that feeds the neurons. The glia are also sensitive to the activity level in each neuron and increase the blood flow (providing more oxygen and fuel) whenever the neurons in the brain region become more active (Rouach, Koulakoff, Abudara, Willecke, & Giaume, 2008).

The glia also play a central role in the brain’s development. Before birth and in the months afterward, the human brain grows at a remarkable rate as its cells rapidly reproduce and differentiate. The newly created neurons then migrate from one posi-tion in the brain to another, moving at a speed of up to 1 millimeter each day. This migration is guided by glia, acting as guidewires—much like beanpoles guiding the growth of bean shoots in the garden. Then, once the neurons have reached their des-tinations and established the appropriate connections, the glia produce chemicals that help to shut down the process of neural growth. In this way, the glia ensure a rel-atively stable pattern of connections. 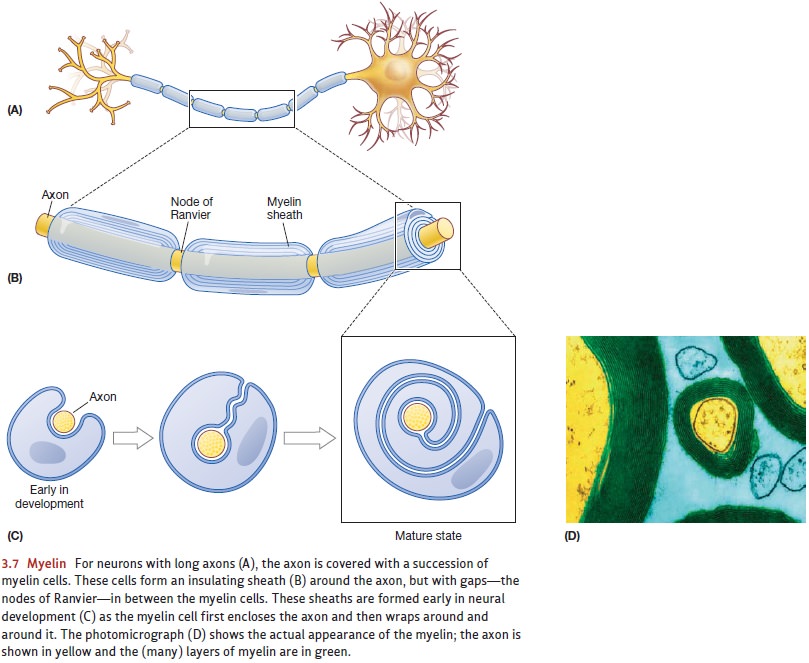 Yet another function of glial cells is to increase the speed of neuronal communi-cation. The glia that accomplish this are mostly made of a fatty substance known as myelin; and soon after birth, these glia start to wrap themselves around the axons ofneurons—especially the longer axons that span greater distances and thus need greater transmission speed (Figure 3.7). Each of the “wrappers” in this myelin sheath covers a portion of the axon, and soon the entire length of the axon is covered by a series of these wrappers. Crucially, though, there are gaps—called the nodes ofRanvier—between the successive wrappers, and it’s this combination of wrappersand gaps that speeds up the nerve impulses traveling along these myelinated axons. (We’ll discuss later why the myelination speeds up the impulse.) 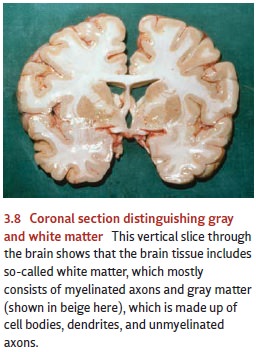 The glia may also have other jobs to do. For example, several recent studies suggest that glia can “talk back” to the neurons, sending signals that help regulate the strength of connections between adjacent neurons. In some circumstances, glia can also release chemicals that increase the reactivity of neurons. This is usually helpful—it makes the nervous system more sensitive to important inputs—but, unfortunately, this same mechanism can sometimes make the neurons too reactive. In the extreme, this increased reactivity may be the source of so-called neuropathic pain—a condition in which people suffer extreme pain in response to even a mild touch—and it may also play a role in the development of epilepsy and several other illnesses (G. Miller, 2005a).

Still other evidence suggests that the glial cells themselves may constitute a separate, slow signaling system within the brain. Glial cells are known to respond to various elec-trical, chemical, and mechanical stimuli. They also form networks that communicate with each other and that may modulate the activity level of neurons nearby. The extent to which these networks of glia interact with neurons in the brain has not yet been determined, but it may be considerable (Bullock et al., 2005; Gallo & Chitajallu, 2001; Newman & Zahs, 1998; Verkhratsky, 1998).