On the face of it, the nervous system might seem to need only two transmitters: an excita-tory one that makes the postsynaptic cell more likely to fire and an inhibitory one that makes the cell less likely to fire. But the reality is different; there are actually a great number of transmitter substances. About a hundred have been isolated so far, and many more are sure to be discovered. (A few of these neurotransmitters are listed in Table 3.1.)

Why does the nervous system need so many signal types? For one thing, the variety helps the nervous system to keep separate the different types of information being passed back and forth. The key idea here is that individual neurons are selective in what neurotransmitters they will respond to. Many neurons are responsive to more than one transmitter; but even so, each neuron has its own pattern of sensitivities. For example, a neuron inhibited by GABA will respond differently—or perhaps not at all—to mole-cules of serotonin that happen to float by. Thus, in each part of the brain, the nervous system can use one transmitter to send one type of message and a different transmitter to send a different type of message. 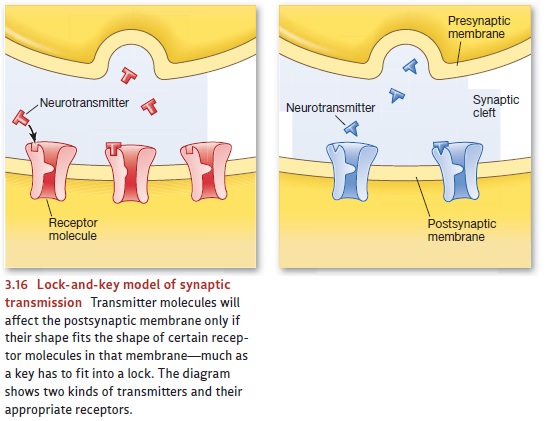 How do neurons manage to be selective in this way? The answer, which depends on the exact shape of the receptors on the postsynaptic neuron, is sometimes described in terms of the lock-and-key model of transmitter action. This theory proposes that trans-mitter molecules will affect the postsynaptic membrane only if the molecule’s shape fits precisely into the receptor, much as a key will work only if it has exactly the right shape for that lock (Figure 3.16).

Let’s be clear, though, that the lock-and-key model provides a highly simplified account of the dynamics linking transmitters to receptors. Thus, our ultimate theory will need to include a number of significant complications (e.g., Bullock et al., 2005). Even so, the notion of receptors being selective in their response, and the idea of different neurotransmitters providing different signals, are key elements in controlling the complex flow of information throughout the brain.