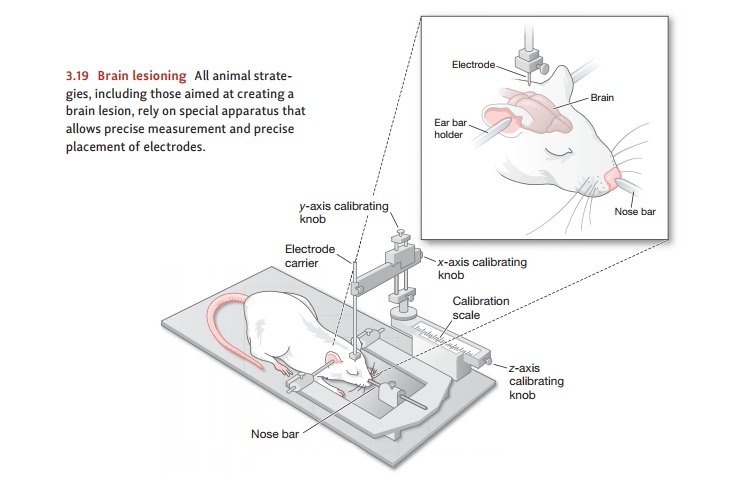 In many cases, we gain further insights into brain functioning by asking what happens if the brain is somehow changed—either deliberately in our research or through accident or injury.

Studying the Effects of Brain Damage

In many cases, we gain further insights into brain functioning by asking what happens if the brain is somehow changed—either deliberately in our research or through accident or injury. For example, in the laboratory, we can use chemicals or weak applications of electricity to stimulate particular brain areas and then observe the resulting changes in behavior. Likewise, we can use different chemicals, or slightly stronger electric currents, to create a brain lesion—damage to the brain cells—at a particular site and then com-pare how the brain functions with this damage to how it functions when the site is unharmed. Alternatively, we can disrupt the flow of information into or out of an area by cutting—technically, transecting—the relevant pathways and then observing the result (Figure 3.19).

Although each of these techniques has been a valuable source of new knowledge, it should be obvious that these procedures, which involve altering the brain of another liv-ing creature, raise some ethical questions. In some cases, the ethical concerns can be weighed against the direct medical benefits of a procedure. (Lesions or transections are sometimes used to treat extreme cases of epilepsy; even though these procedures are car-ried out for therapeutic purposes, we can still gain valuable information by studying the results.) In other cases, the brain manipulation is done not for medical treatment but as 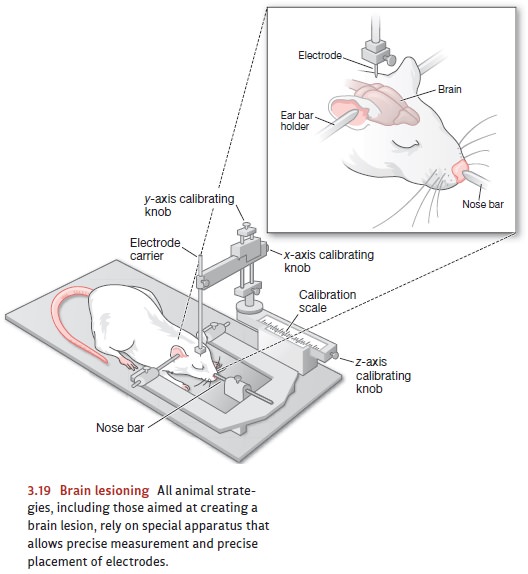 part of a scientific study; here, the ethical concerns must be weighed against the study’s potential scientific benefits. These benefits are, however, often large; for example, stud-ies of brain lesions have allowed enormous progress in our understanding of Parkinson’s disease, multiple sclerosis, and Alzheimer’s disease. This progress will undoubtedly con-tribute to new forms of treatment for these conditions.

Outside of the laboratory, people sometimes suffer disease or injuries that can cause damage to the brain. These naturally occurring cases are tragic, but they can provide information useful both for researchers and for those involved in treating the afflicted individual. The study of these cases defines the special field of neuropsychology—the effort to gain insights into the brain’s function by closely examining individuals who have suffered some form of brain damage.

Early studies in neuropsychology relied on clinical observation of patients with brain damage or disease: What were their symptoms? How was their behavior disrupted? For example, consider the grisly case of Phineas Gage, who in 1848 was working as a con-struction foreman. Gage was preparing a site for demolition when some blasting powder misfired and launched a 3-foot iron rod into his cheek, through the front part of his brain, and out the top of his head (Figure 3.20). Gage lived, but not well. As we’ll discuss later, he suffered intellectual and emotional impairments that gave researchers valuable clues about the roles of the brain’s frontal lobes (Valenstein, 1986). 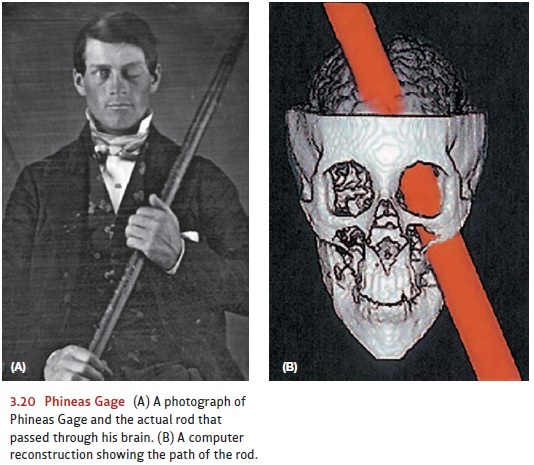 In Gage’s case, the brain damage was clear; the task for investigators was to define the consequences of the damage. In other cases, the situation is reversed: The behavioral effects are obvious, but the nature of the brain damage needs to be discovered. More than a century ago, physicians were able to describe the disruption itself—the difficulties their patients had in speaking or understanding. It was not until years later that they identified the affected brain regions—regions that we now know are crucial for language.

In more recent studies, neuropsychologists have moved beyond clinical observation. Now they often do fine-grained experiments to find out exactly what a brain-damaged individual can and cannot do. These experiments are usually combined with the neu-roimaging techniques we’ll describe in a moment, so that the investigators can match a precise picture of the person’s brain damage with an equally precise assessment of her deficits.

Over the past 25 years, investigators have developed a new experimental technique that can produce temporary brain disruption and allow investigators to perform experiments that would otherwise not be possible. This technique—transcranial magnetic stimula-tion (TMS)—involves creating a series of strong magnetic pulses at a particular locationon the scalp (Figure 3.21). At certain intensities and frequencies, these pulses stimulate the brain region directly underneath that scalp area; thus, investigators can use TMS to activate otherwise sluggish brain regions.

At other intensities, though, TMS has a different effect: It creates a temporary dis-ruption in the brain region just beneath the scalp—allowing investigators to “turn off ” certain brain mechanisms for a brief period of time and observe the results (Fitzgerald, Fountain, & Daskalakis, 2006). This technique obviously presents an enormous range of experimental options and lets investigators examine in detail the function of this or that brain region. However, TMS does have limits as a research tool: It influences only structures near the surface of the brain (i.e., immediately inside the skull). Even so, TMS is a powerful addition to the neuroscientists’ tool kit.

We should also mention that TMS is more than just a research tool, because investigators are also exploring its therapeutic potential (e.g., Gershon, Dannon, & Grunhaus, 2003). Some uses are already in place: In late 2008, the U.S. Food and Drug Administration approved the use of TMS as a therapeutic procedure for some cases of clinical depression.