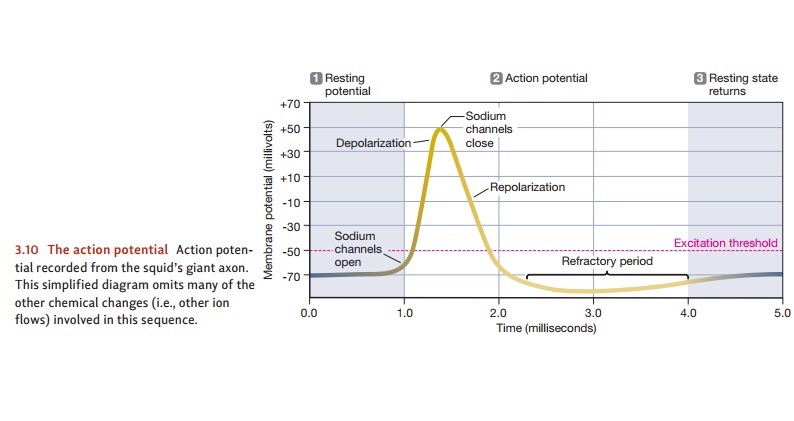 We’ve just described the action potential in terms of electrical measurements, but what lies behind these measurements?

We’ve just described the action potential in terms of electrical measurements, but what lies behind these measurements? What is going on inside the neuron—and, crucially, at the neuron’s cell membrane—that causes this momentary change in the neuron’s electrical state? The answers lie in the movements of ions through the neuron’s mem-brane. Ions are molecules (or single atoms) that have a positive or negative electrical charge. When a neuron is at rest (i.e., not stimulated), the inside of the cell contains both positive ions and negative ones, and the same is true for the fluid outside the cell membrane. What’s crucial is the concentration of each ion type, and these concentra-tions are different inside the cell than they are outside.

What governs the ion concentrations? As one factor, the cell’s membrane contains mechanisms called ion pumps that—as their name implies—actively pump ions into or out of the cell. For the most part, these pumps work to move sodium (Na+) out of the cell and potassium (K+) into the cell, but they do so unevenly: three sodium ions move out for every two potassium ions that move in.

In addition, the cell membrane contains ion channels—actual passageways through the membrane. When open, these channels allow certain ions (but not others) simply to pass through. In other words, the channels work roughly like bouncers at a party or a bar—they let desired guests pass through unchallenged but block undesired visitors.

When a neuron is at rest, sodium ions are barely able to pass through these channels, but potassium ions flow through freely. We need to bear in mind, though, that (thanks to the ion pumps) there are more potassium ions inside the cell than outside, and (as a general fact of chemistry) ions tend to move from areas of higher concentration to areas of lower concentration. Therefore, the dominant movement of potassium through these channels is outward—out of the cell interior and into the extracellular fluid. This creates a surplus of positive ions outside of the cell, and this is the main source of the resting potential—again: the voltage difference across the neuron’s membrane, with the cell interior electrically negative relative to the cell exterior.

The situation changes dramatically when some portion of the membrane is stimu-lated in some way (mechanically, electrically, or chemically). In this case, a new set of ion channels—ones that allow sodium to pass—spring open and so sodium ions flood into the cell (Figure 3.10). This process leads to an excess of positively charged particles on the inside of the membrane, and this is why our electrodes detect a sudden swing toward a positive voltage. Immediately after, though, the membrane returns to its orig-inal status: The sodium pumps resume their evacuation of sodium to the outside of the 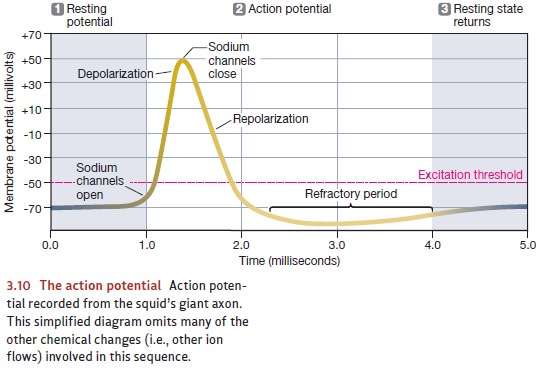 neuron, and the sodium channels slam shut to keep it out. This process reestablishes the membrane’s stability and restores the resting potential.

This restoration is fast, but it does take a moment; and during this restoration process, there is still an imbalance of ions. This is why, during this brief interval, it is much more difficult to launch a new action potential. This interval is referred to as the refractory period—the time after an action potential during which the cell mem-brane is unprepared for the next action potential. Once the refractory period is done, however—a time span of just a few milliseconds—the membrane is back to its resting state and ready for the next input.