Benzene could be constructed as a straight chain or ring compound but it not feasible since it does not show the properties of alkenes or alkynes.

Elemental Analysis and molecular weight determination have proved that the molecular formula of benzene is C6H6. This indicates that benzene is a highly unsaturated compound.

Benzene could be constructed as a straight chain or ring compound but it not feasible since it does not show the properties of alkenes or alkynes. for example, it did not decolourise bromine in carbon tetrachloride or acidified KMnO4. It did not react with water in the presence of acid.

i) substitution of benzene:

Benzene reacts with bromine in the presence of AlCl3 to form mono bromobenzene.

Formation of only one monobromo compound indicates that all the six hydrogen atoms in benzene were identical. This is possible only if it has a cyclic structure of six carbons each containing one hydrogen.

Benzene can add on to three moles of hydrogen in the presence of nickel catalyst to give cyclohexane.

This confirms cyclic structure of ben-zene and the presence of three carbon-car-bon double bond.

In 1865, August Kekule suggest-ed that benzene consists of a cyclic planar structure of six carbon with alternate sin-gle and double bonds.

There were two objections: 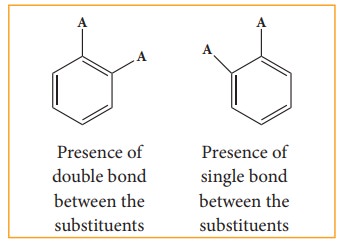 ii) Kekule’s structure failed to explain why benzene with three double bonds did not give addition reactions like other alkenes.To overcome this objection, Kekule suggested that benzene was mixture of two forms (1 and 2)which are in rapid equilibrium.

The structures 1 and 2 exist only in theory. The actual structure of benzene is the hybrid of two hypothetical resonance structures. 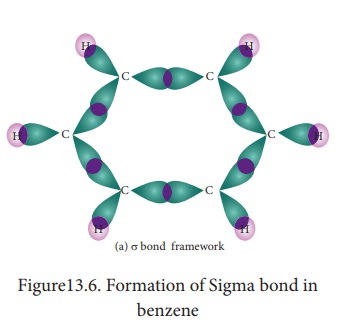 All the σ bonds in benzene lie in one plane with bond angle 120°. Each carbon atom in benzene possess an un hybridized p-orbital containing one electron. The lateral overlap of their p-orbital produces 3 π- bond The six electrons of the p-orbitals cover all the six carbon atoms and are said to be delocalised. Due to delocalization, strong π-bond is formed which makes the molecule stable. Hence unlike alkenes and alkynes benzene undergoes substitution reactions rather addition reactions under normal conditions. 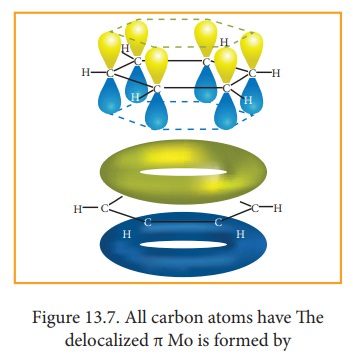 Hence, there are three ways in which benzene can be represented.

Benzene and its homologous series

Benzene and its homologous series are colorless liquids with pleasant odour .They are lighter than water and insoluble in it. Their vapours are highly flammable, and volatile and toxic in nature.