Alkynes are unsaturated hydrocarbons that contain carbon-carbon triple bonds in their molecules.

Alkynes are unsaturated hydrocarbons that contain carbon-carbon triple bonds in their molecules. Their general formula is CnH2n-2. The first member of alkyne series is Ethyne popularly known as acetylene. Oxyacetylene torch is used in welding.

Let us write the IUPAC name for the below mentioned alkynes by applying the general rules of nomenclature that we already discussed in unit No.11 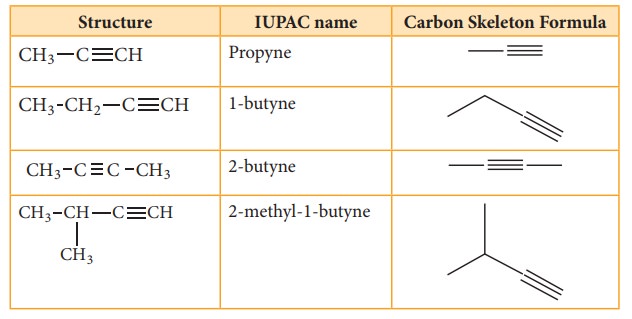 General Methods Of Preparation Of Alkynes

1. Preparation of alkynes from alkenes:

(i) Halogenation of alkenes to form vicinal dihalides

2. Preparation of alkene from gem dihalides: 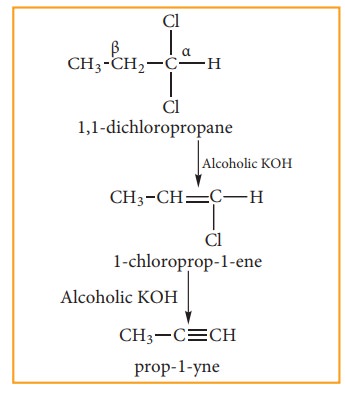 Electrolysis of sodium or potassium salt of maleic or fumaric acid yields alkynes. 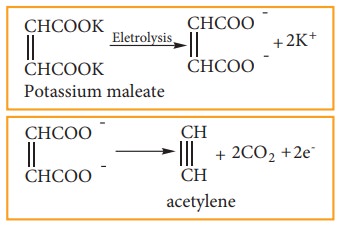 Ethyne can be manufactured in large scale by action of calcium carbide with water.

1. The first three members are gases, next eight are liquids and the higher alkynes are solids. They are all colour-less and odourless except acetylene which h as a garlic odour.

2. They are slightly soluble in water but dissolve readily in organic solvents like benzene, acetone and ethyl alcohol

Terminal Alkynes are acidic in nature. It un-dergoes polymerization and addition reaction.

i) addition of hydrogen

When Br2 in CCl4 (Reddishbrown) is added to an alkyne, the bromine solution is decolourised. This is the test for unsaturation.

Ozone adds to carbon-carbon triple bond of alkynes to form ozonides. The ozonides are hydrolyzed by water to form carbonyl compounds. The hydrogen peroxide (H2O2) formed in the reaction may oxidise the carbonyl compound to carboxylic acid. 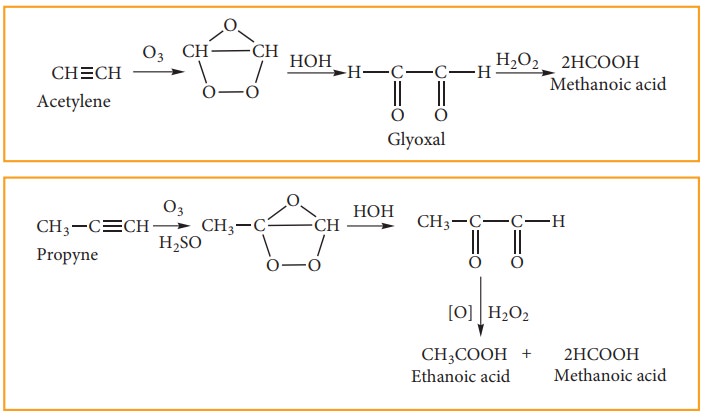 Ethyne forms linear polymer, when passed into a solution of cuprous chloride and ammonium chloride.

1. Acetylene is used in oxy acetylene torch used for welding and cutting met-als.

2. It is used for manufacture of PVC, polyvinyl acetate, polyvinyl ether, orlon and neoprene rubbers.