(i) Addition of hydrogen: (Hydroge-nation of alkenes)

hydrogen adds on to alkenes in the presence of a metal catalyst (Ni, Pd (or) Pt) to yield corresponding alkanes. This is known as catalytic hydrogenation. This process is of great importance in the manufacture of vanaspathi from vegetable oil. This helps to prevent rancidity of vegetable oils.

When alkene is treated with halogens like chlorine or bromine, addition takes place rapidly and forms 1, 2- dihalo alkane (or) vicinal dihalide.

Iodine reacts very slowly to form 1, 2 – diiodo alkane which are unstable and re-generate the original alkene by elimination of iodine. 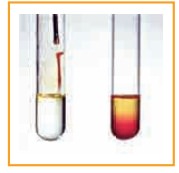 Bromine in water is reddish brown colour. When small about of bromine water is added to an alkene, the solution is decolourised as it forms dibromo compound. So, this is the characteristic test for unsaturated compounds.

"When an unsymmetrical alkene reacts with hydrogen halide, the hydrogen adds to the carbon that has more number of hydrogen and halogen add to the car-bon having fewer hydrogen”. This rule can also be stated as in the addition reaction of alkene / alkyne, the most electro negative part of the reagent adds on to the least hy-drogen attached doubly bonded carbon.

Normally, water does not react with alkenes. In the presence of concentrated sulphuric acid, alkenes react with water to form alcohols. This reaction follows carbo-cation mechanism and Markovnikoff ’s rule.

Hydrogen halides (HCl, HBr and HI) add to alkene to yield alkyl halides. The order of reactivity of different hydrogen ha-lides is HI>HBr>HCl. It is an example for electrophilic addition.

(a) Addition of HBr to symmetrical alkene: 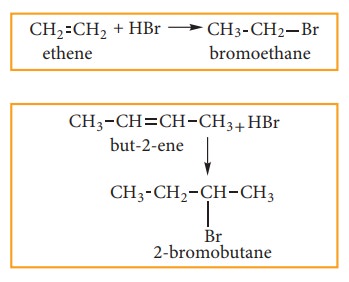 (b) Addition HBr to unsymmetrical alkene:

In the addition of hydrogen halide to an unsymmetrical alkene, two products are obtained. 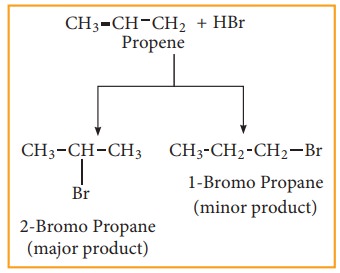 Consider addition of HBr to propene

In H-Br, Br is more electronegative than H. When bonded electron moves to-ward Br, polarity is developed and creates an electrophile H+ which attaches the double bond to form carbocation, as shown below. 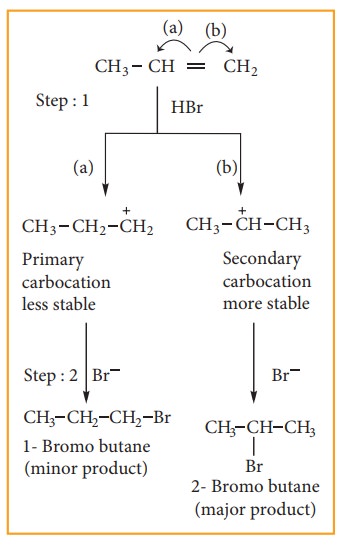 Step:3 The Br–ion attack the 2° carbocation to from 2-Bromobutane, the major product. 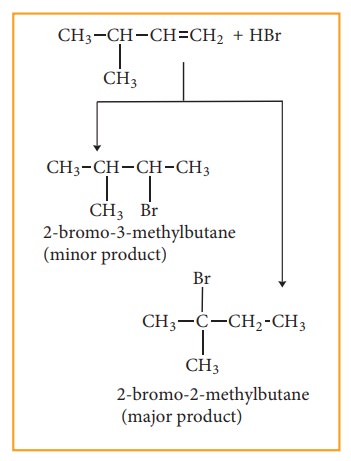 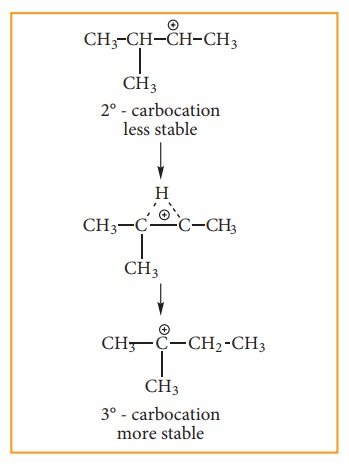 The addition of HBr to an alkene in the presence of organic peroxide, gives the anti Markovnikoff’s product. This effect is called peroxide effect. 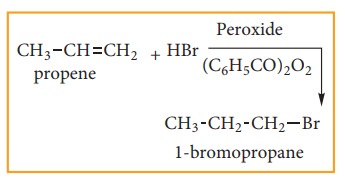 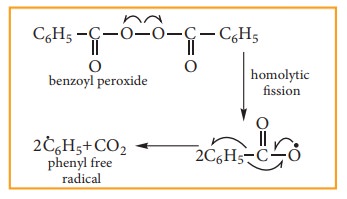 The Bromine radical adds to the dou-ble bond in the way to form more stable al-kyl free radical. 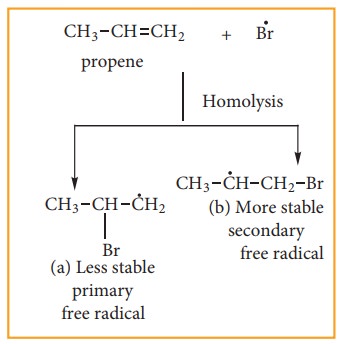 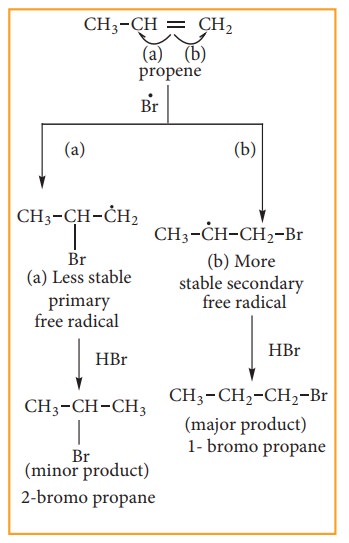 The H-Cl bond is stronger (430.5 kJmol-1) than H-Br bond (363.7 kJmol-1), thus H-Cl is not cleaved by the free radical. The H-I bond is weaker (296.8 kJ mol-1), than H-Cl bond. Thus H-I bond breaks easily but iodine free radicals combine to form iodine molecules instead of adding to the double bond and hence peroxide effect is not observed in HCl& HI. 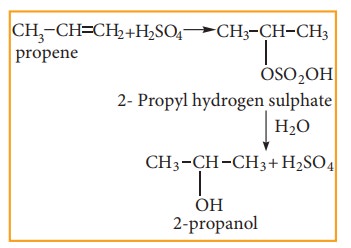 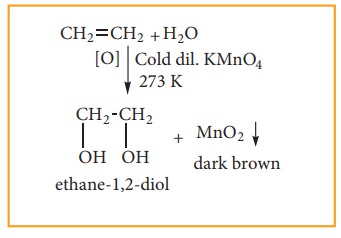 Alkenes react with acidified KMnO4 solution and are oxidised to ketones or car-boxylic acid depends on the substituent at the olefinic carbon atom.. The purple solu-tion becomes colourless. This is one of the test for unsaturation. 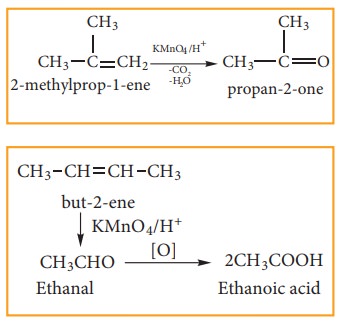 Ozonolysis is a method of oxidative cleavage of alkenes or alkynes using ozone and forms two carbonyl compounds. Alkenes react with ozone to form Ozonide and it is cleaved by Zn/H2O to form smaller molecules. This reaction is often used to identify the structure of unknown alkene or alkyne by detecting the position of double or triple bond. 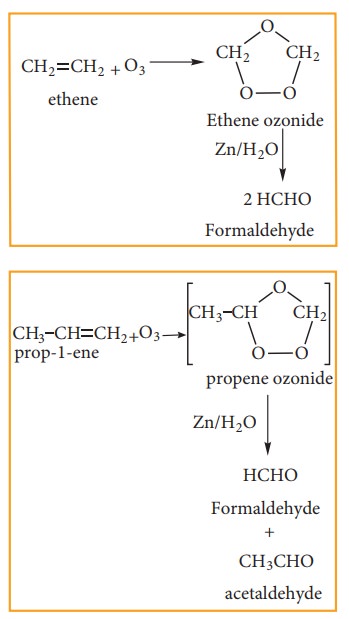 A polymer is a large molecule formed by the combination of larger number of small molecules. The process in known as polymerisation. Alkenes undergo polymerisation at high temperature and pressure, in the presence of a catalyst. 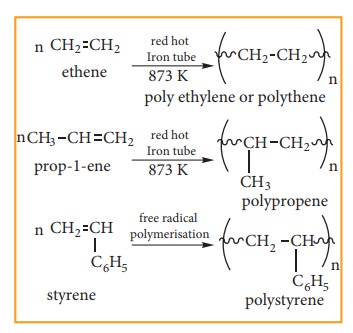 Extensive use of polymers clogs up landfills and polute the environment. Be-cause of diversity of polymers in consum-er products, recycling requires sorting the polymers into various sub-types, labels with codes and symbols, which are then recycled separately.

Table shows the codes and symbols used in recycling of ethene-based additionpolymers.

(Lower the number, greater the ease of recycling the material)