Benzene contains delocalized π-electrons which make the ring to act as an electro rich centre.

1. Benzene contains delocalized π-electrons which make the ring to act as an electro rich centre. So electrophilic substitution reaction occurs in benzene.

2. Benzene ring is stabilized by delocalized π electrons. Though it is highly stable, it undergoes addition and oxidation reaction under specific conditions.

When benzene is heated at 330K with a nitrating mixture (Con. HNO3 + Con. H2SO4), nitro benzene is formed by replacing are hydrogen atom by nitronium ion NO2+(electrophile)

Concentrated H2SO4 is added to produce nitronium ion NO2+

Benzene reacts with fuming sulphuric acid (Con H2SO4 + SO3) and gives benzene sulphonic acid. The electrophile SO3 is a molecule. Although it does not have positive charge, it is a strong electrophile. This is because the octet of electron around the sulphur atom is not reached. The reaction is reversible and desulphonation occurs readily in aqueous medium.

When benzene is treated with analkyl halide in the presence of only AlCl3, alkyl benzene is formed.

When benzene is treated withacetylchloride in the presence of AlCl3, acyl benzene is formed

Benzene undergoes electrophilic substitution reaction because it is an electron-rich system due to delocalised π electron. So it a easily attacked by electrophilies and gives substituted products.

Formulation of the electrophile

The electrophile attacks the aromatic ring to form a carbocation intermediate which is stabilized by resonance. 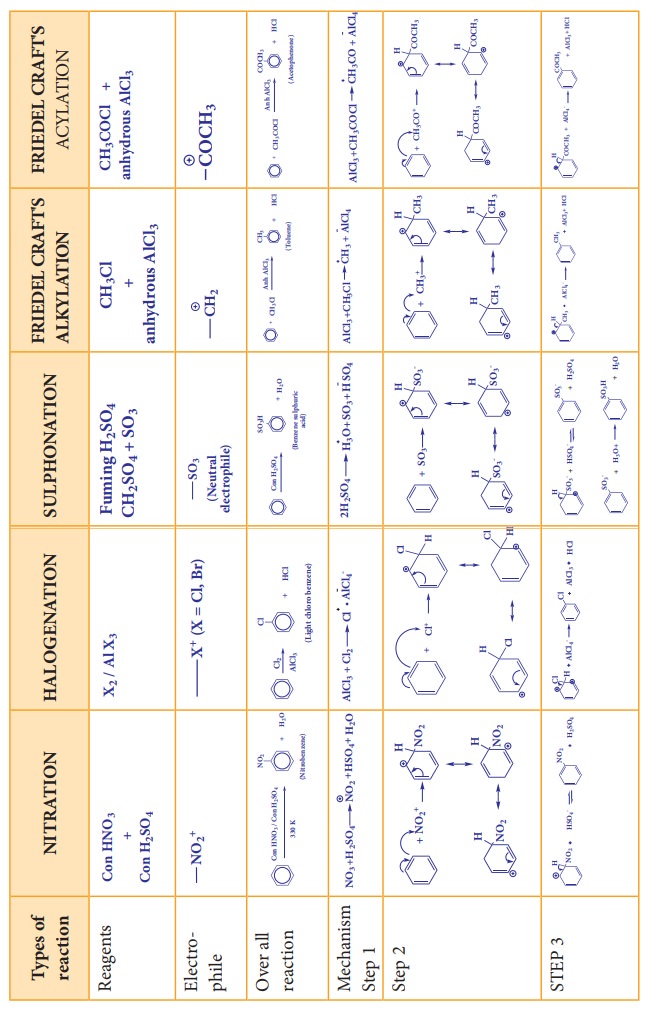 a. Hydrogenation of benzene:

Benzene reacts with hydrogen in the presence of Platinum or Palladium to yield Cyclohexane. This is known as hydrogenation.

b. Chlorination of Benzene:

Benzene reacts with three molecules of Cl2 in the presence of sun light or UV light to yield Benzene Hexa Chloride (BHC) C6H6Cl6. This is known as gammaxane or Lindane which is a powerful insecticide. 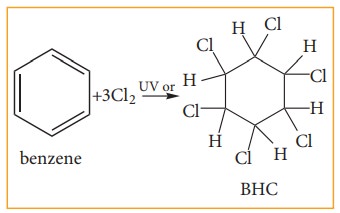 Although benzene is very stable to strong oxidizing agents, it quickly undergoes vapour phase oxidation by passing its vapour mixed with oxygen over V2O5 at 773k. The ring breaks to give maleic anhydride. 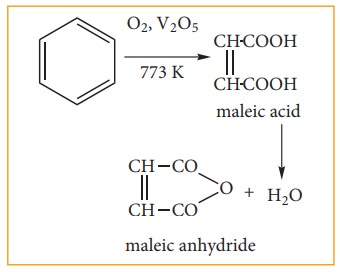 Benzene can be reduced to 1, 4-cyclohexadiene by treatment with Na or Li in a mixture of liquid ammonia and alcohol. It is the convenient method to prepare cyclic dienes.